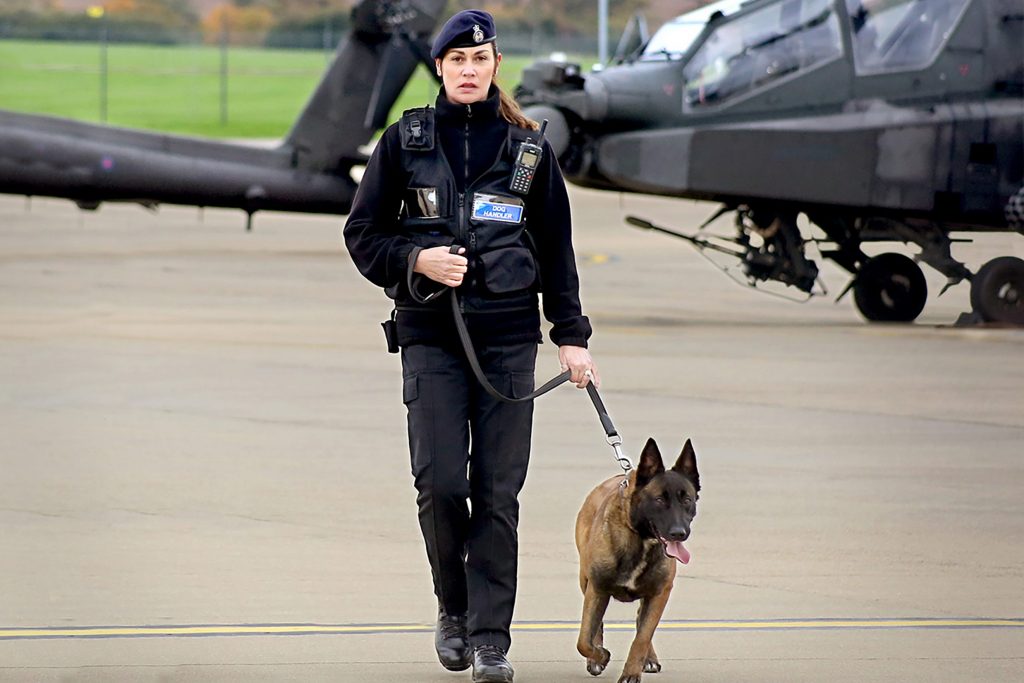 MGS' dog units make a huge contribution to the security of many MOD sites. [Crown Copyright]

I am the Dog Evaluation Officer for the MOD Guard Service (MGS). What does that mean? Well, I carry out all the licensing and assessments for our teams to ensure they are competent and are safe to deploy. I also inspect all kennels and infrastructure to ensure compliance with current MOD policies and Building Performance Standards. In addition, I ensure all equipment is and approved for use, all food rations are properly accounted for and all paperwork is properly completed. I ensure statutory regulations on welfare such as the Animal Welfare Act 2006 are being complied with through annual inspection of each dog section. I also liaise with the Royal Army Veterinary Corps for any assurance, training or policy updates or any other changes that affect how we care for our canine colleagues. I represent dog handlers on the MGS clothing and equipment committee as well other meetings on any and all matters relating to military working dogs.

Though MGS guards well over 100 MOD sites, not all of them have guards who use dogs. We have sections from Kirkcudbright in Scotland, down - or south if you prefer - through Northumberland, Yorkshire, the Midlands, Oxford, Warwickshire, Wiltshire, Hampshire, Dorset and Somerset. Three of the sections are Garrison-style sections, which means they cover a large number of sites within a geographical area providing excellent value for money.

It’s quite a spread! We currently have dogs and handlers who patrol on average 4000 miles per year on foot and around 50,000 miles by vehicle.

Dogs are also an essential part of some units’ licensing requirements to hold, store and distribute arms and ammunition as well as other vital assets, such as Apache helicopters or armoured vehicles. This is because individual units have differing licence requirements that may require additional layers of security in order to function and operate legally and safely and in some cases military working dogs are part of that. Along with our other guards, Ministry of Defence Police and military colleagues, the dog units are an important part of the security systems which protect those who live and work ‘inside the wire’ on our sites.

Dogs are recognised as a what we call a ‘force multiplier’, meaning one dog team on the ground is as efficient as four roving non-dog patrols, due to their superior senses of smell, hearing and speed. Additionally, most people will submit when challenged by a dog team. They are virtually impossible to escape from and when required they are trained to chase and detain a fleeing suspect by biting and holding onto the right arm. This allows the handler to make a lawful arrest - provided the handler has followed the rules of engagement, they can arrest under common law for which constabulary powers are not required.

Our current dog breeds include German Shepherds, Belgian Malinois, Czech Shepherds and Dutch Herders. These breeds are tried and tested for police and security work, due to their intelligence, agility and size. The handlers undergo a three week basic dog course, held at the Defence Animal Training Regiment. Once passed, they return to their unit and are teamed with a dog. Each dog has two handlers. At their unit continuation training is conducted by each handler, which includes bite work, obedience, agility, pick- up and indication, restraint and manipulation. All handlers are tested and assessed at least annually or if they change dogs, which is sometimes required because of veterinary issues or the retirement of their current dog, for example. All dogs are kennelled on site and off duty dogs are cared for by the duty handlers.

We provide an excellent service in difficult and uncertain times. After independent inspection and audit in 2015 we achieved the National Security Inspectorate Gold medal in 2015 for the provision of security dog services. We continue to hold this prestigious award following subsequent audits.

There are hundreds of attempted incursions which have either been thwarted or dealt with by handlers and no doubt, unknown numbers of others that have simply moved on when spotting a dog patrol in the area.

We are a mobile, agile and flexible service adhering to MOD, military and statutory standards for training and welfare. Providing overt and covert patrols dog teams improve the security profile of any site to which they are deployed.