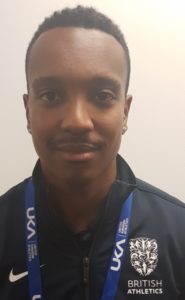 My role is as an Athlete Logistics Coordinator, for the TV Events department assisting in the logistics for the major events for athletes. It is a very varied role but one I am thoroughly enjoying.

Black History means a lot to me; I am and have always had immense pride in being black and what that represents. It is great to have a month that celebrates our successes and how far we have come as a race.

I have many black role models, but the one that stands out the most to be and touched me the most through his life is Nelson Mandela. A man that fought his whole life for one cause, and even served 27 years of his life for that cause and still didn’t stop believing until he achieved his dream. 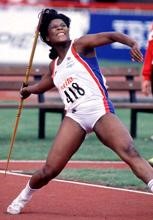 Theresa Ione “Tessa” Sanderson, CBE was born on 14 March 1956 in Jamaica.  Tessa a javelin thrower and heptathlete was a member of Wolverhampton & Bilston Athletic Club coached initially in the progressive days by John Moogan, and, subsequently by National Track and Field Coach Wilf Paish.

She was the UK’s leading javelin thrower from the mid-1970s, winning silver in the 1978 European championships and gold in the Commonwealth Games three times (1978, 1986, 1990), but was eclipsed during the 1980s by the up-and-coming Fatima Whitbread, with whom she shared a long-standing rivalry.

When Tessa won the gold medal at the 1984 Summer Olympics in the javelin, becoming the first British woman ever to win Olympic gold in this event, her victory was quite unexpected. In the end, her career outlasted Whitbread’s, and she competed at senior international level until 1996.

UK Athletics are supporting Black History Month which celebrates the achievements and contributions of black people around the world while educating all on black history. Following on from the &lsquo...