Transgender Day of Visibility at Sage 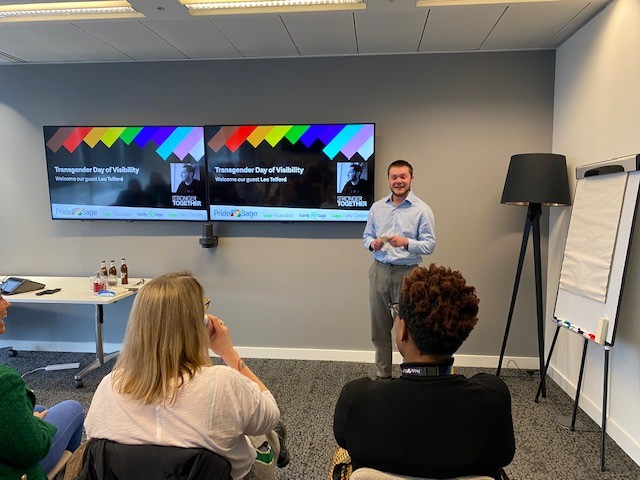 Each year, on the 31st of March, the world celebrates Transgender Day of Visibility – a day held in celebration of those who went on a particular journey of finding themselves and who they are.

This year, Pride at Sage had the pleasure of welcoming Leo Telford back to our London Bridge office, after he had previously visited us at just 15 years old to discuss his journey. He spoke openly to colleagues about his personal experiences, answering questions from an audience full of intrigue and in an interview with apprentices Freya Brady and Nina Scott, allowing colleagues to gain some further insight into his incredible journey as a young trans man.

In the interview, Leo expressed to us that he had previously felt uneducated about what it meant to be transgender. Having no knowledge of the word transgender itself until he was 11, Leo never felt like he fit in with his peers as a child - with most of his friends being male and always opting for boys clothing; he just chose what was most comfortable at the time, trying not to question it too deeply. Leo shared with us that he felt as though everyone else knew who they were, who they wanted to be, and as he got older and gained some further awareness, he described it to a school pastoral worker as ‘I like girls, but as a boy, not a girl’. With this in mind, he grew older and found the word transgender and instantly knew that it described him.

Sharing this identity with family and friends was difficult at first. Although some of Leo’s family were not surprised by the news; his parents struggled to process it. He explained that his parents had been overwhelmed and struggled with the change as it was something they hadn’t imagined. After a few attempts of ‘coming out’ and some open discussions, Leo found it to be his close relationship with his mum that allowed him to feel truly comfortable in opening up. A combination of trips to the GP, the support of his family and eventually a referral to CAHMS – Leo was able to begin his transition.

Whilst Leo was supported at home, school wasn’t as plain sailing. With an alarming lack of resources and understanding from both school staff and pupils, Leo found himself at the forefront of a lot of confusion. Conversations like ‘where do I get changed for P.E.?’ and ‘what toilets do I use?’ began, with other students spreading rumours and openly discussing Leo’s life. He explained that it was only once he had left secondary school and started sixth form that he felt truly comfortable in his identity. Due to a more challenging experience in school, he chose to be ‘stealth’ through his time at sixth form. For Leo, this meant only telling one close friend and one teacher about his journey. This was a refreshing change for Leo, as, for the first time in his life, he had complete control over what he shared and who knew his story.

Leo believes that education on the topic is key, it has proven to be nowhere near inclusive enough currently. School pupils, particularly teenagers, aren’t taught about sexuality or identity and such education needs to be part of the school curriculum. There’s evidently a place for them, and current PSHE lessons are heavily focused on heterosexual relationships with a long way to go before they’re inclusive enough. Leo also believes there is a place for this at home, although expressed that educating younger children should be done casually, finding it unnecessary to sit them down and overload them with information. He explained that these small, subtle teachings would mean that children are raised with an inclusive mindset resulting in them growing up to be more informed and aware.

It's certainly safe to say that Leo’s aspirations have shifted since he was younger, from superhero to sociology teacher, Leo’s journey has led him to understand that it’s okay to not know what you want to do or who you want to be and with so much choice being daunting, Leo has the continued support of his parents with his choice to travel for a while as opposed to the traditional university route.

Looking to the future, we asked Leo for his opinions on LGBTQ+ in the workplace, and what may encourage him when searching for jobs and reading job adverts. In response, he explained the importance of companies creating a safe, welcoming environment – especially ones actively involved in pride projects, alongside values and practices in place to support the LGBTQ+ community. On the other hand, he would avoid businesses with set, overly ‘traditional’ values. When asked about Sage, he admitted that Sage wasn’t what he expected it to be. With connections in the company, he had learnt about Sage Foundation and the vibrant Pride Network and agreed that other market leaders don’t have qualities like this, especially as a large, corporate company.

Reflecting on his journey, Leo said that he wouldn’t change anything as his experience shaped his personality and who he is today. The key piece of advice Leo would share with other transgender individuals, or those struggling with their identity, is to be patient. Taking your time in all aspects isn’t a bad thing, it allows exploration of identity and time to become comfortable within yourself.

Leo’s ‘microphone moment’ to the world would be to ‘tolerate each other’. You don’t have to see eye to eye with someone, but the majority of the time, these opinions aren’t directly affecting you or your life, so there’s rarely a reason to be against it. Keep your mind open, and surround yourself with diversity, as there will always be something to learn. From the news you read, to the people you’re around, be open to everything and know that being so occupied on other people will only reflect on you.

We hope Leo’s shed some light on a topic that’s not spoken about nearly enough. If you would like to show your support further, we asked what charities helped him through his journey the most, here’s what he said:

Lastly, Leo shared some of his top tips in showing your support:

This profile is with Gaelle Bourven, VP of Engineering, Sage X3   Brittany Benson: Thank you for joining and sharing a few minutes of your day with me, Gaelle! Could you share a little bit of detail a...

This profile is with Hannah Wright, Director of Product Marketing   Brittany Benson: Thank you for joining and sharing a few minutes of your day with me, Hannah! To get us started, can you please chat...

This profile is with Cindy Bechtel, Director of Competitive Intelligence at Sage.   Brittany Benson: Thank you for joining and sharing a few minutes of your day with me, Cindy! To get us started, can...