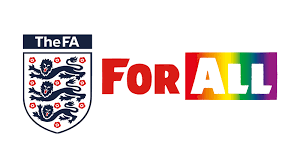 Football and The FA can play a really important role in encouraging everyone to be exactly who they are – and creating acceptance and tolerance in wider society.

With this in mind, last November we announced a formal partnership with Stonewall FC to support their work. A tangible example of this support was the hosting of Stonewall’s Middlesex County Football League Division One clash later that month with Wilberforce Wanderers AFC – at Wembley Stadium.

It was the first time a non-League seasonal fixture has been hosted at the national stadium. We have continued to provide extensive backing for the ‘Rainbow Laces’ campaign and delivered ticketing opportunities for LGBT+ fan groups at every England game at Wembley last season.

July this year saw over 50 FA employees, County FA staff and other members of the football community among the 30,000 people who took part in the Pride parade on Saturday 6 July in central London. The parade marked 50 years since the birth of the modern LGBT+ rights movement.

"The effort made to create a LGBT+ inclusive environment within The FA for all of our staff and beyond demonstrates The FA's commitment to making the game truly accessible to everyone.”