During our week of Pride celebrations here at Capita, we asked colleagues to share their experiences and their ideas of how we could become more inclusive. We spoke to Chris Mennell, Project Manager, to find out what Pride means to him.

Hello Chris. Why did you get in touch to share your experiences?

Because I’m a proud gay man. I’ve worked at Capita for five years and have always found it to be an inclusive company, where I’ve never experienced any prejudice, and have always felt welcomed.

I also want to show my support for our LGBTQ+ network – Rainbow Alliance – which brings colleagues together, whether they’re part of the community or a straight ally. 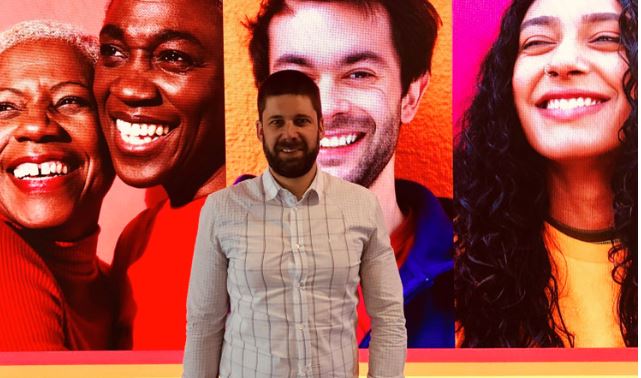 What does Pride mean to you?

It’s an opportunity to celebrate how far we’ve come, recognise there is still work to do to ensure equality, and to raise awareness about people who did so much to get us where we are today, as well as thank those who continue to fight for our rights.

I know that there have been leaps and bounds over the past 50 years since Stonewall, but there is still a long way to go.

Hate crimes against LGBTQ+ people have risen in London, and I think there’s still a lot of prejudice out there. Many people feel they still must remain closeted because of how they believe society will view them.

Pride’s also an opportunity for our community to say to the world that we are still here and we are proud of who we are.

Tell us about your childhood and how you came out to your family.

I was a quiet, shy, gentle kid, who went to a rough comprehensive school in Hull and was bullied, so I didn’t have the best experience, aside from coming to terms with my sexuality.

I remember realising that I didn’t like girls in the same way as the other boys did, but I didn’t realise it was because I was gay.

I came out to my mum when I was 17, and she suggested it might just be a phase. It wasn’t. I came out to my dad a bit later, and, while they were both very supportive, I think it was a struggle for them both at first.

Thankfully, I didn’t really experience much homophobia when I was growing up, but do wish we’d been given LGBTQ+ inclusive relationship and sex education at school.

I think my mum still worries about me, because she knows that we still live in a world that can be cruel to minorities, but she knows that I am comfortable with who I am, and that I’ve got a wonderful husband, who makes me very happy.

How did you and your husband meet?

On a Caribbean cruise. He’s from Chile and so we had a long-distance relationship to start with, which wasn’t always easy. Also, he was raised in a Catholic family, so didn’t want to let people from outside his friends and family to know about us. For a while, he told people that the person he was chatting to online and visiting was his girlfriend.

Although there are some gay rights in Chile, it’s still far behind the UK in terms of legislation and acceptance. So that presented some obstacles.

For example, he was taken aside by his boss and told that although colleagues knew about his lifestyle, he’d never be able to bring a partner to a work event or talk about his life as a gay man. It just wouldn’t be accepted.

So, when we’d decided that we wanted to be together, and get married, he moved to London. I’d struggled for many years with coming to terms with who I am, and the last thing I wanted to do was have to hide who I was. It would feel like taking a huge step back. He completely understood. And although he does get homesick, we visit as often as we can.

We celebrated our fourth wedding anniversary in April.

Do you get frustrated by some of the stereotypes that can be applied to the LGBTQ+ community?

At times. For example, when some people suggest that being gay is a choice. It isn’t. It’s just who you are. There are some people who also believe that all gay men behave in the same way – that we’re all bitchy and promiscuous – when that’s not the case either.

How would you like to see Capita to support LGBTQ+ colleagues in the future?

I think it’s about doing more of the same. So, supporting our Rainbow Alliance network, providing opportunities for us to collaborate, celebrating events like Pride, listening to our views, and helping us to raise awareness and share knowledge.

I’d also like to see us hold events with other organisations and their LGBTQ+ networks, and other diverse groups, so we can learn from each other and build relationships.

In the first of our series this week to celebrate International Women's Day, we hear from Chantal Free, Chief Executive Officer of Capita Portfolio and the Executive Sponsor of Capita’s Gender Equal...

This week is Race Equality Week, an annual UK-wide movement uniting thousands of organisations and individuals to address the barriers to race equality in the workplace. The week’s theme of #Action...