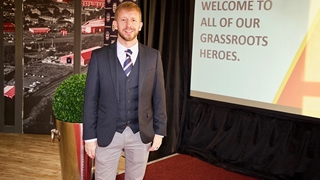 In 2020, we at North Riding FA were approached by Redcar & Cleveland Council to help them address the challenging issues surrounding mental health across the borough.

Whilst the focus for us all here was around having good mental health, unfortunately Teesside has the accolade no area wants. It is regarded as Britain’s suicide capital and at one point the suicide rate was over 70 per cent higher than the national average.

The Tees Joint Strategic Needs Assessment (JSNA) data shows those who do take their own lives are, statistically, likely to be single men who live alone and are unemployed – so it was vital that we took the lead to try and support those in need.

We were confident that, as an organisation with a strong reputation, we were very well placed to develop and deliver a campaign that would raise awareness, particularly at a time when the pandemic has exacerbated people’s mental health struggles for multiple reasons.

Internally, we place health and wellbeing of paramount importance for our employees at all levels, some of whom are now trained as mental health first aiders. With this ethos in mind, we strongly believed we could make a difference, utilising football’s ability to influence this space.

From a personal perspective, I’ve had teammates that have struggled with mental health and unfortunately one lost their life to suicide. So, for me, this campaign was about knowing the right words to use and having that toolkit to understand how you can help someone who is struggling.

Inspired by our partner, Emmerson Marketing, we wanted to create a clear and concise strapline, and by using a familiar football term, it needed little or no explanation. 'There's No Substitute for Good Mental Health'. It promotes that, above all, good mental health is the key to emotional, psychological, and social wellbeing.

Visually, we were set on using real images from amateur football clubs across the borough – weathered dugouts, rain-soaked pitches and changing rooms – to localise the campaign and strike a chord with our audience. These are the places that our local population knows and the real football world that they inhabit.

Sitting along the strapline and image, we were keen to continue the football analogies, stating that: There are times when we all feel the strain. Talking about your feelings or your mental health isn’t a sign of weakness. So, don’t ever feel that you’re on the sidelines and have to cope on your own. You don’t. We are here to help, and together, we can tackle the challenges that you are facing. Together, we will Beat the Opposition.

This campaign is now being rolled out across the borough and the response and reach have been phenomenal, being very well received by our grassroots community. Bespoke advertising has allowed us to target certain demographics across Redcar & Cleveland and the campaign is now physically visible across Teesside, being displayed on 25 bus shelters and roadside billboards.

What was reassuring was that we had key local football clubs come forward and dedicate their commitment and involvement in the campaign. This took the form of roadside banners at club sites, sharing across social media and a willingness from individuals to come forward to tell their story.

The focus of the campaign was around raising awareness and we are really pleased that there has been a significant rise in people accessing the Every Mind Matters website, utilising the fabulous resources and toolkits available. We’re now expanding the campaign using the restart of football as our launch pad, working with a local Sunday football league and their teams to create brand awareness through the production of match balls, substitute bibs and beer mats.

Through an expression of interest form, we will also be working with selected teams to provide warm-up tops that can be worn to their matches and beyond. In exchange, the teams have agreed to continue to actively promote the No Substitute campaign, providing personal player stories and motivational messages.

We are delighted to have played our part in improving access to mental health information and support to those who need it most locally, and this will continue to be a priority for North Riding FA for years to come.