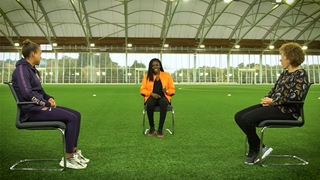 In the latest edition of our Black, England and Proud series, we hear from two Lionesses' legends from the past and present in Kerry Davis and Nikita Parris.

We sat down with Parris and Davis to get their thoughts on the pride felt as Black women representing their country.

Chatting to Sky's Jessica Creighton at St. George's Park, it turned into an open and honest chat about their early lives and pathway into the game as well as their thoughts on the current situation.

For Davis, who played for England between 1982 and 1998 and was the Lionesses' all-time leading goalscorer until Kelly Smith usurped her 44 goals in 2012, she explained the story behind her rise to the top.

After growing up in Stoke-on-Trent and finding her pathway into football through her brother, she went on to play for Crewe Alexandra and spent time in Italy with Lazio, Trani and Napoli while also proving one of England's finest players on the pitch.

She went on to feature in the 1987 UEFA Championship Finals and the 1995 Women's World Cup and collected 82 caps in total.

And current England star Parris talks openly about growing up in the Toxteth area of Liverpool and how she developed her love for football before progressing into the professional game.

The Lyon striker also reflects on the responsibility she feels in representing the Black community every time she's on the pitch, as well as looking back at some of the mistakes she feels she's made along the way.

You can watch the full chat below.