Former Birmingham City and Derby County captain Michael Johnson has been working on the coaching staff of the England MU21s this season as part of the FA’s elite coach placement programme. 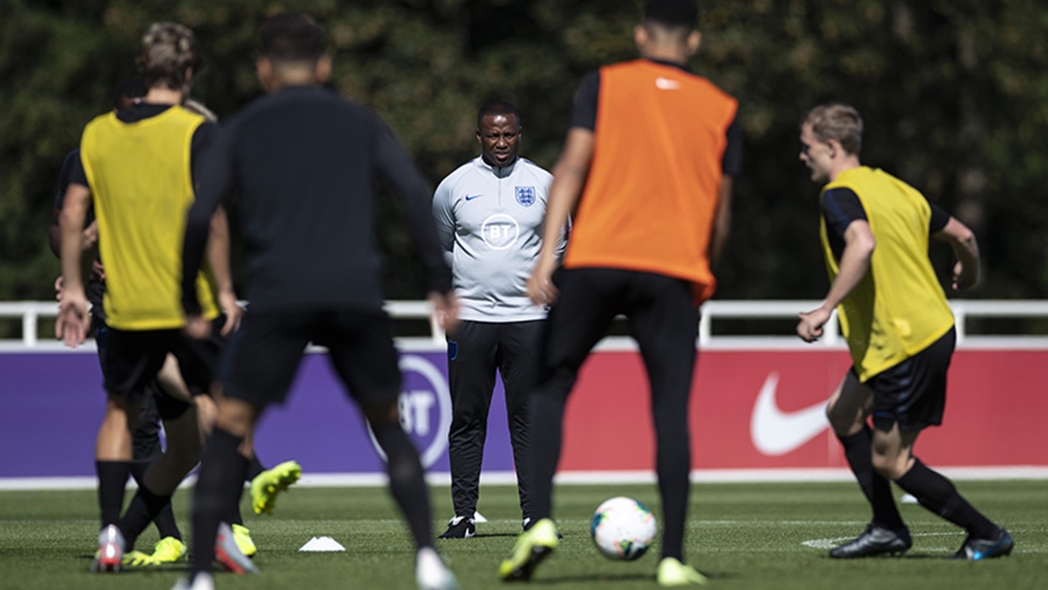 Michael Johnson watches on during a training session with England MU21s earlier this season.

Michael, how has the season been for you with the MU21s?

“Everything has been exceptional for me. The opportunity to work at international level and see how Aidy Boothroyd, Tim Dittmer, Lee Carsley and the operation and way they work – it’s been brilliant.

“The learnings that I’ve gained from it, for me personally, have been wonderful. Not just being part of it, but being involved in some of the discussions about why we do what we do, a look at the outcomes of that and the long-term vision and planning which goes into international football and tournaments – it’s just been great to be a part of.”

The scheme itself has seen a number of BAME coaches join the staff of the England men’s teams. As a collective, do you all feel to have benefited so far?

“We speak on a regular basis to garner our thoughts and experiences. As the months have gone by, I think everybody has benefited from being involved at this particular level.”

Michael Johnson has been working with the England MU21s this season.

The number of BAME players in the development teams is high. How important is it for them, and their families to see BAME coaches involved?

“It’s important for the game overall, whether you’re a spectator, an employee or a player. There’s so many understandings to bring from a cultural level to the staff to help them recognise exactly what the players might be experiencing on a day-to-day basis.

“Even if it’s something like getting a hair cut, that’s an important thing for some of the guys from a BAME background and food is another important thing because you’re catering for cultures from the Caribbean or from Africa. If you’re in camp for a certain number of days, things like the food become important.

“I remember when I was with Guyana and I was trying to have a conversation with players and they weren’t looking at me…it wasn’t that they were being rude, but it was a culture of how they were brought up not allowed to make eye contact with their elders.

“It’s those kind of discussions that can help bring more understanding to the coaching staff and players.

“But the biggest thing for me is making sure the players know they can aspire to do this if they want to, so there’s a role model and mentoring factor too.

“If players see someone like me, who looks like them, in a senior position it helps them gravitate to the fact that I can potentially reach that position by working as hard as you can.

“So there’s benefits now for them to see someone from a similar background to them in a certain position.

Chris Powell has been working alongside Gareth Southgate and the England men's senior team this term.

“There’s so many cultural nuances and benefits from having a BAME member on the coaching staff, and from the point of view of a fan, you probably don’t realise the impact it has when they’re watching and sees a Michael Johnson or a Jason Euell in a senior position - you’re inspiring and motivating people without even really knowing that you’re doing it.

“If someone sees that and can relate to you, they might think ‘wow, if that person can do it, that might open doors for me’

You’ve spoken previously about coaching opportunities with clubs, do you feel as though schemes like this will leave you equipped for that should it arise?

“It’s unfortunate that we’re still here discussing the reasons why opportunities like this should be getting created, so there’s still clearly something wrong.

“But credit to the FA because they’re trying to do something about it and now hopefully it’ll benefit the guys who have been involved in the future.

“It’s been great to get that, almost, first year under my belt and the significant learnings and network of players and coaches that I’ve now worked with, I feel I can put that in my CV and hopefully be a lot better placed the next time I go for an opportunity.”

Was there ever a particular moment in the last few years when you really felt as though your colour was holding you back in coaching?

“My experience has shown me two ways to look at it; yes, from an external point of view but no from a personal development side.

“My CV doesn’t lie and that’s one of the things that will always remain strong as I’m very proud of my CV.

“I’ve got all the coaching qualifications from youth level to the Pro Licence, and then going into the other side of the game with the LMA Diploma and a master’s degree in sporting directorship and I’ve also done a UEFA masters for international players.

“So there’s a host of qualifications there, but it’s experiences which are harder to come by and that’s external.

“For me, it doesn’t matter what anybody says, I feel I’m at the top of my game and I can only control myself.

“So regardless of position, I will always act, behave and conduct myself as a sporting director or top coach because I need to be able to act and think like that because I’m in control of my own mindset.

“What I refuse to do, is let the situation dominate and pull me down to the time when I think ‘well, what’s the point?’

“That’s why, nine of ten years after retiring, I’m still really engaged in education and involved in the game even though people might say ‘well, he’s not had a managerial or sporting director position yet’.”