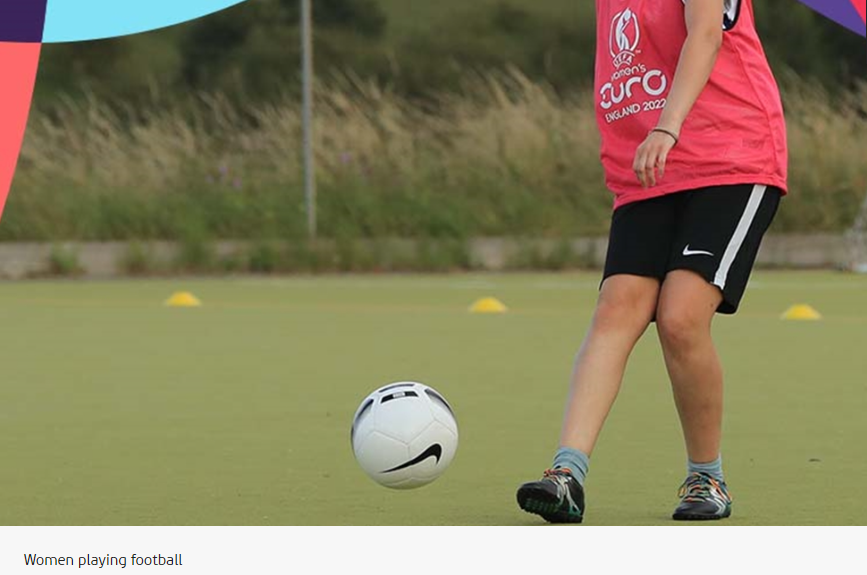 As part of their ongoing legacy work for UEFA Women’s EURO 2022, Manchester FA began working with Khizra Mosque in Cheetham Hill after offering an initial taster Soccercise session. The Mosque had been affected by continuous closure periods over a course of the pandemic, but once restrictions were lifted and the Mosque could open regularly again, the team were ready to start work. Participation of Asian women is significantly lower across Greater Manchester, so Manchester FA wanted to show them that everyone was welcome in football!

Concerns had arisen of physical activity levels dropping to a very low rate since the start of the pandemic. Khizra Mosque is a crucial hub for the community, which had been heavily impacted by social distancing measures and reduced capacity. A consultation with Communities4All found that a session combining exercise with a socialising session would be most effective for this community.

The session at Cheetham Hill was structured by 30 minutes of exercising with a football (Soccercise) and 30 minutes of socialising, with drinks and snacks available. The session was initially set up for mothers with children aged 3 and under. The County FA brought in a childminder for the sessions to allow the parents to fully immerse themselves and take advantage of the opportunity to speak to fellow participants. The work by Manchester FA addressed a major barrier of participation for mothers and showed the women that football is truly For All, despite the misconceptions of football only available it’s traditional format.

Khizra Mosque participants fully embraced the Soccercise session and exceeded all expectations of Manchester FA. The women adopted and prioritised the healthy habits, with snacks during the socialising session quickly swapping from biscuits to fruit and salad – they did not want to undo all the great work from the session!

The sessions were regularly attended by 10 women, even with apprehensions of indoor group exercise session since the pandemic. After the success of Soccercise at the Mosque, the sessions have now opened up to the wider community. Two participants have since completed The FA Playmaker course and lead sessions. They now have ambitions to complete additional qualifications, so they can run their own Just Play centre.

Participants were keen to increase the inclusivity of the session, with sessions initially in Urdu, now incorporating Arabic and English. Many involved had low confidence in their English skills but wanted everyone in the community to feel welcome. The socialising session has now been adapted with a different topic set to be discussed in English each week as an opportunity to develop everyone’s confidence and learn more about each other.

One participant commented: “I didn’t know there was any space for me in football until I saw how it could be adapted. The women love the exercise each week and have showed an interested in their own health and wellbeing!”

Another said: “Football isn’t just for the boys. I’ll have to get a sports tracksuit like the coach now.”

Leigh Gell of Manchester FA praised the session: “The energy I experience every time visiting the Mosque is absolutely amazing. People were reluctant and nervous to begin with, but we have now created an enjoyable and inclusive atmosphere! We have found a template that works, and I can’t wait to replicate it across Manchester and Trafford!”

Cathy Walker on being a Coach

Local children in Plymouth have been given the opportunity to keep active in the lead up to Christmas with the help of Premier League Kicks football coaching sessions delivered by Plymouth Argyle Com...

Becoming a member of the Defence Sikh Network

Hello I’m Jassi and I joined the MoD in lockdown as a Defence Geographer, I spent the first six months working remotely with a limited office presence. I was unable to meet many of my colleagues and...

Volunteers are celebrated by RTPI

Zoe MacGregor is the RTPI’s Volunteer Project Co-ordinator responsible for developing volunteering at the RTPI.     Investing in Volunteers, the RTPI’s first ever strategy for volunteer engage...