Family-business Draper Civil Engineering has reported its highest ever growth, thanks to a series of back to back contract awards from HS2’s construction partners. 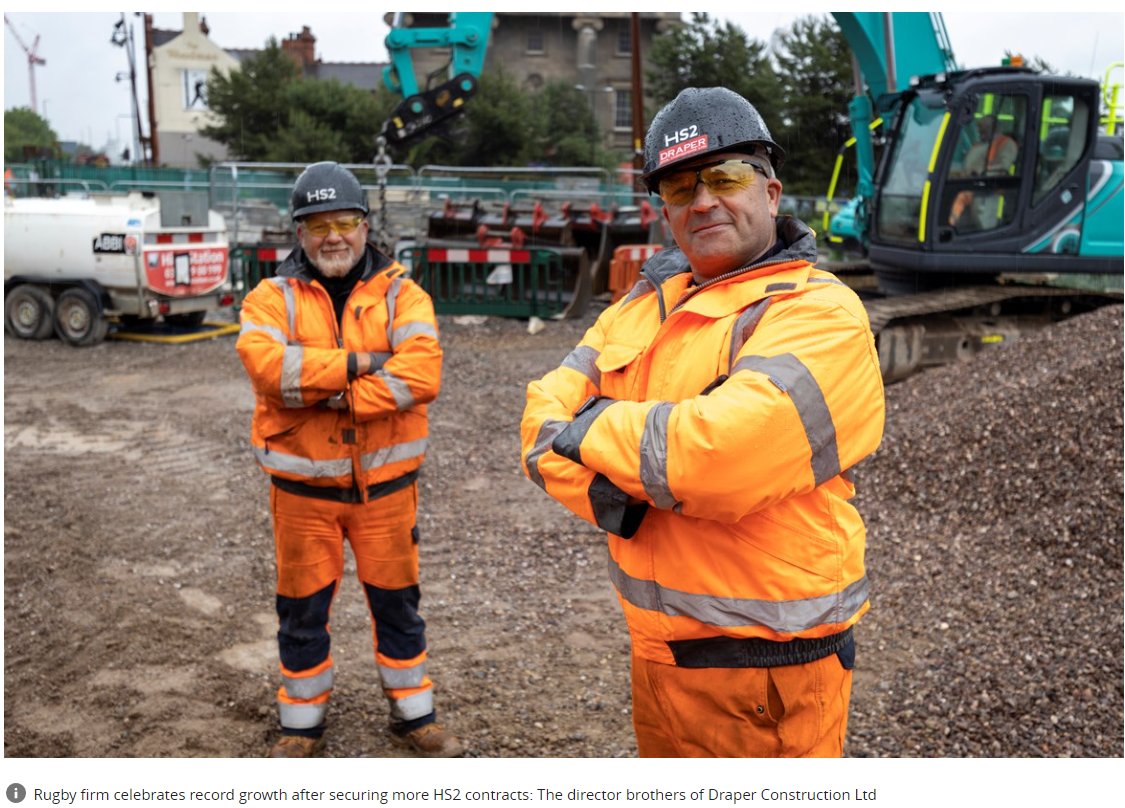 The company, which is run by brothers Liam and Dale, began supporting the construction of Britain’s new zero carbon railway four years ago. They were awarded a contract to support the archaeologists who carried out Birmingham’s most complex excavation programme, which led to the discovery of the world’s oldest roundhouse, more than 6,500 skeletons and important historical artefacts that shed new light on the city’s fascinating history.

The quality of Draper’s workmanship led to repeat contract awards, allowing the firm to expand their workforce and create more jobs for local people. As a result, the brothers now employ around 100 people from the local area and continue to play a crucial role in the civils works at Curzon Street where HS2’s new flagship terminus station will be built.

“Small businesses have a vital role to play in HS2’s construction and as the team at Draper’s have shown, when you join our supply chain the opportunity to win more work and expand your business is real.

“Over 2,500 UK business are now working with us, and we’re proud that SME’s, like Draper’s, account for of over two thirds of that figure.”

“There’s also the great news story of a local, Rugby based business succeeding on such a high profile national project and I was really pleased they are supporting local young people to learn skills through apprenticeships and training, which will help to ensure that we can continue to develop the skills we will need for the future.”

The Draper brothers have now secured their first contract on HS2’s second phase, linking the West Midlands and Crewe, where they will be carrying out further archaeological exploratory works. The company is fast becoming known for its expertise in the area and has started to win new work, on other projects, thanks to the networks they are building though HS2’s supply chain.

“The pipeline of work that HS2 and its construction partners are creating has really accelerated our business over the last two years, and to achieve that during the pandemic really is extraordinary.

“HS2 is one of the biggest projects of our generation. We thought playing a part in it once was a huge achievement, but the fact we’re still here four years later is brilliant for us and our expanding workforce.”

For more information on equity, diversity and inclusion programmes and initiatives at HS2 please click here.

HS2 is happening creating jobs already At peak construction, over 34,000 people will be needed to design and build the railway. Over 500 of the 2,000 expected apprentices are already on board....

To mark International Women’s Day, HS2 and its construction partners are hosting a number of local initiatives to encourage more women to step forward and consider a career in construction and enginee...