Lughnasadh is often known amongst the Pagan community as the First Harvest, as this is when many of the crops can and will be harvested and then stored carefully for the coming winter months when food will be very hard to grow.

Pronounced “Loo-nas-ah”, this festival happens on the 1st August every year.

In this article, I will share with you some of the many ways in which several (but not all) Pagan paths follow this time of the year, how they celebrate it and rituals and spells (spells being a form of prayer) they may conduct.

The Origins and History of Lughnasadh:

The first of three harvest celebrations, Lughnasadh has its roots deep within British lore.

In Ireland, it has been known as “Lugnasad”, in Scotland “Lunasda”, in the Isle of Man it was known as “Luanistyn” and in Wales as “Gwyl Awst” or “Feast of Augustus”. In England it was known as “Lammas” meaning “loaf-mass”, and this festival originated in Ireland.

The Celtic deity, Lugh, (who is believed to have originally come from Ireland) gives this festival its name. Known these days more of a solar god, it was thought he was known as a god of human skill, kings, and a patron of heroes. Lugh has also been equated to the Roman god, Mercury.

Lugh was known as the King of the Tuatha de Danaan a race of divine beings whose name translates into “people of the goddess Danu”. Danu was a Mother Goddess and was often linked to water, earth, and victory. The story goes that Lugh helped Danu’s followers to displace the Fir Bolg and Fomoiri (the rulers before Danu and Lugh, who were sort of like Irish monsters) Lugh was very skilful in his crafts and warfare.

Lughnasadh has been known as a wedding feast and as funeral games, depending on where you read the myths and legends surrounding the early stories of Lugh and the festival of the first harvest. For the link to funeral games, it was believed that these were held in honour of Lugh’s stepmother, Tailtiu (pronounced Tal-chi-uh) who was the wife of the last King of the Fir Bolg and when they were overthrown, Tailtiu remarried one of the Tuatha de Danaan and she died of exhaustion from clearing the fields of Ireland, preparing them for agriculture.

Lughnasadh was also a popular time for trial marriages, temporary partnerships that lasted a year and a day until the end of the next fair, and then the union could be dissolved if wished. The Pagan marriage rite of Handfasting was also popular at this time of the year, with many of the unions now solidified with a Handfasting ceremony.

Lughnasadh fairs were often held near burial mounds of mythical divine feminine heroines, such as Tailtiu or Carman.

As time went on, and traditions migrated across to Britain, newcomers such as the Danes and the Germans adapted to Britain and became known as Anglo-Saxons. Traditions blended, and some new occasions arose, such as the German hlafmaesse or “loaf mass”, a celebration of the first fruits and wheat harvests.

There is more information on the histories of Lughnasadh within the books detailed below.

How we Celebrate Now:

Many Pagan paths celebrate this festival by welcoming in the first harvests of fruit and wheat, with bread making featuring high within practices to be able to imbue our energy into it for peace and prosperity, and we like to make the bread interesting shapes, such as plaits and cottage loaves or “dollies”.

Corn dollies are also something a lot of Pagan paths like to make at this time of the year as well, incorporating practices where energy can again be brought into the dolly, with positivity and peace. Corn dollies are traditionally made with sheaves of wheat, or the husks leaves, cut down to size and tied together to make a head, arms, and legs. These are often hung around the home as an offering for a good 1st harvest and asking deities such as Lugh to bless their efforts.

Celebrations, rituals, spells, and rites of an Eclectic Witch during Lughnasadh:

As you may have read in some of my other articles, I like to be referred to as an ‘Eclectic Witch’. This means that I predominantly honour Mother Earth and her seasons and cycles, and I utilise different practices within my own, but never appropriating any.

For example, the Native Americans have long been known for their Smudge Sticks and Totem Animals, but other cultures through the centuries have also used herbs to cleanse (which is what a smudge stick is) and animals as spirit guides (such as Shamans) and many witchcraft practices have long used herbs for cleansing their sacred spaces and animals as their spirit ‘familiars’.

During Lughnasadh, I will do very similar rituals for cleansing and clearing my altar space as I would do for any other festival or equinox.

For the Lughnasadh, I like to use colours such as burnt oranges and deeper yellows with bright and also deep greens and maybe some deep blues, so signify the turning of the season as summer begins to develop into early autumn. I would include not only my altar cloth, but the candles I may use to adorn my altar, and crystal I would like that would represent the first harvest, the colours of the season and balance within nature, so possibly crystals such as Jasper (for nurturing, tranquillity and working together well with others)Moonstone (this stone has a soothing and calming energy, is connected to the moon and helps with letting go of old emotions that no longer serve us well) Carnelian (a stone full of energy, healing and helps with confidence) and Tiger’s Eye (for protection, grounding and regaining balance)

Regarding festivals, as for many of the other times of the year I celebrate, attending festivals has been limited due to the current situation with the pandemic, so where I used to attend in person festivals to celebrate Lughnasadh, I now attend them virtually online, either via Zoom or other media to be able to still interact with my fellow Pagans.

I like to use a spread I found in the internet (although I do have others from books I’ve found over the years) and is as follows: 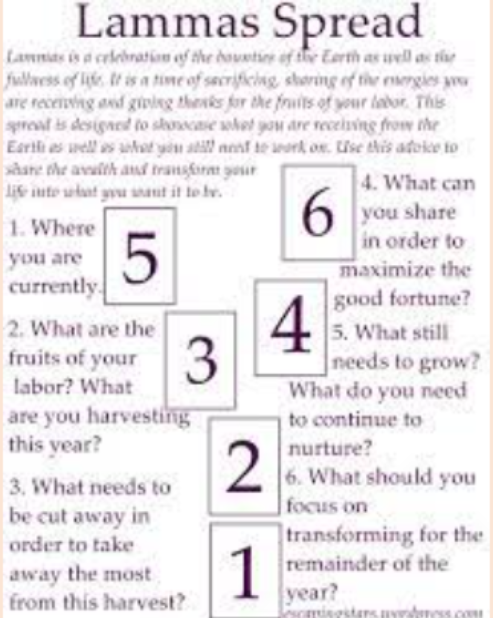 The Lammas Spread: Cleanse and bless your cards prior to your reading and say a small prayer of thanks for the help and guidance to be given to you.

Shuffle the cards whilst thinking of your question or issue. Lay out the six cards as per the image above, so it looks like a tree. Place all the cards face down, then turn them over, one by one.

Each card you turn over will represent a potential outcome or feeling aligned to each of the questions asked of you above.

Books of Interest on Lughnasadh:

Faith & Belief in the Workplace

Wherever we work we want to be able to bring our whole self to the workplace. Diversity has many layers and not all of them visible. Having a faith or belief is one of the many layers that people are...

Hi, I’m Pam Roberts Digital Change Lead in the Chief Information Office at Whittington and proud to be DIO’s Diversity and Inclusion Champion for the Faith and Belief Forum.      Why am I proud? Well...

One year on and another Ramadan during in some form of lockdown restrictions. You may have read my article last year?! When we first went into lockdown, I certainly didn’t think a year on from then w...