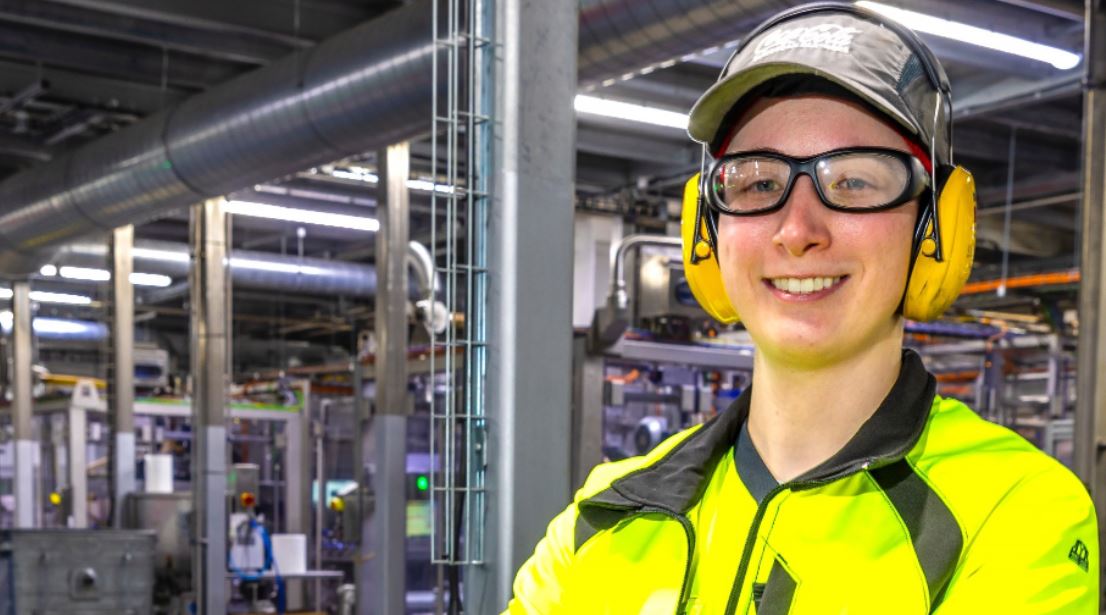 This is Jennifer, and in her whirlwind of an apprenticeship at Coca-Cola Europacific Partners (CCEP), she’s gone from the first female engineer at our East Kilbride site to a role model and diversity champion for young people all over Scotland.

Jennifer was up against some stiff competition from apprentices at companies nationwide, but still she was the one to be crowned Apprentice of the Year at the Scottish Apprenticeship Awards. This was for her work pioneering engineering solutions that enabled us, one of the country’s biggest commercial operations, to become significantly more sustainable.

Sharon Blyfield, Head of Early Careers at CCEP, said: “During her apprenticeship, Jennifer played a vital role in leading a project to improve mechanical efficiency on the Capri-Sun line. She designed and implemented a system guide to help colleagues find the quickest routes to prevent our machines from jamming. This has reduced waste by 30 percent while producing up to 10 percent more product!”

Jennifer was announced the winner by presenter Jennifer Reoch and former apprentice, award winner and Clyde 1 DJ Jonny Campbell. Speaking on her win, Jennifer said: “It makes me feel very proud and I feel like I want to promote to other people to join apprenticeships.”

And so she has. Jennifer has just accompanied senior members of staff at a Scottish Parliament open day to promote the importance of apprenticeships across Scotland and acted as a Just Be ambassador, an initiative which works to improve inclusion and diversity in the workplace.

Sharon said: "As the first female engineer at the East Kilbride site, Jennifer is changing the narrative around engineering, an industry that has traditionally been dominated by men. She’s paving the way for future female engineers to follow in her footsteps as apprentices, volunteering to talk in schools and to young people in the community.”

Minister for Higher Education, Further Education, Youth Employment and Training, Jamie Hepburn said: “The Scottish Apprenticeship Awards are a fantastic way to celebrate the voices of apprentices and their employers from across the length and breadth of the country. Jennifer is a great example of how apprenticeships work for Scotland.”

Jennifer started her SCQF Level 6 Modern Apprenticeship at CCEP in August 2017 and completed it in April 2021. Now, she’s a senior technical operator on the Capri-Sun line and is already in charge of two production lines.

Jennifer said: “My Modern Apprenticeship has given me the knowledge to do things properly and  find better ways of problem solving. That's improved my confidence a lot. Through this apprenticeship, you work with experienced engineers and they pass that knowledge onto you.”

You can read more about how we are fostering an inclusive, diverse and equitable culture across our business here.