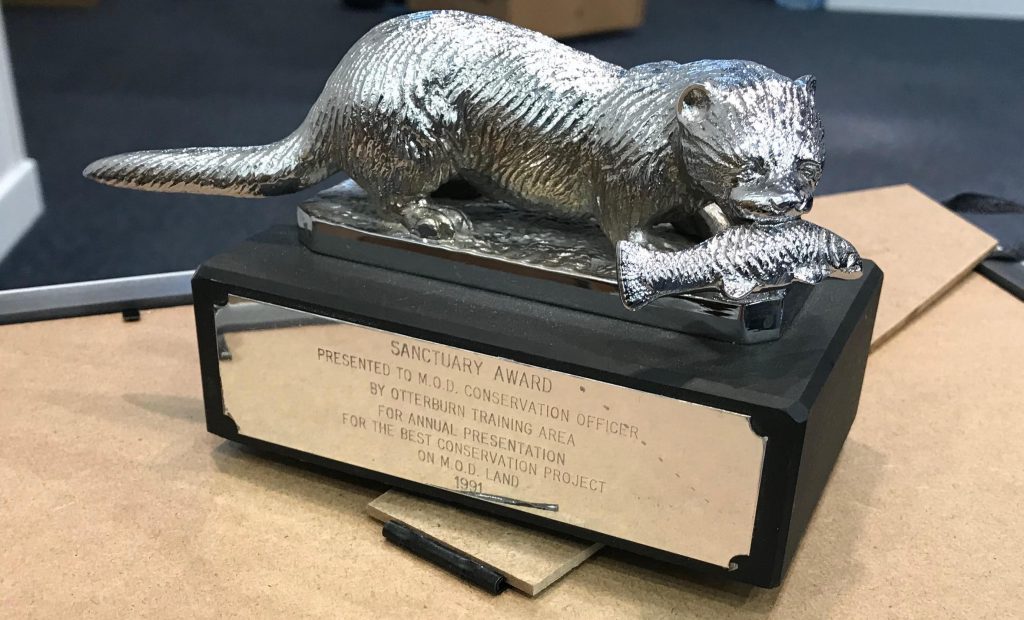 This week we hosted the first ever virtual Sanctuary Awards ceremony!

The Sanctuary Awards have been showcasing outstanding sustainability and conservation efforts across the Ministry of Defence (MOD) estate since 1991, celebrating the achievements of teams and individuals in the UK and overseas.

Whilst the awards ceremony is usually held at MOD’s Main Building, Covid-19 restrictions meant that the 2020 ceremony was rescheduled and held virtually this week. The awards were presented by the Minister for Defence Procurement, Jeremy Quin MP and Lieutenant General Richard Nugee, MOD’s Climate Change and Sustainability Review Lead. Julia Powell and I hosted the ceremony, as part of our roles on the Sanctuary Awards judges panel and Sanctuary magazine editorial board.

The award categories were refreshed last year to reflect the MOD’s sustainability agenda and further demonstrate MOD’s commitment to its climate change, environmental and sustainability goals. Every year, the winners of each category are also considered for the Silver Otter and Sustainable Business Awards.

Here’s a brief overview of the 2020 winners.

The coveted Silver Otter trophy was awarded to the Restoration of Chicksands’ Historic Walled Garden Project, which also won the Social Value, Community and Heritage Award, for renovating the Grade II listed walled garden at Chicksands Camp in Bedfordshire.

With guidance from our heritage team and other experts, the group focused on sustainable solutions and wildlife conservation, and the project has become a stunning example of what can be achieved. A wildlife pond and formal beds have been re-established, and the garden has become a sanctuary for serving personnel and the local community.

The Princess Royal and Victory Jetties Project at Her Majesty’s Naval Base (HMNB) Portsmouth won these awards for the reconstruction work to accommodate the Royal Navy’s two new aircraft carriers. This was a partnership project between the Royal Navy, Defence Infrastructure Organisation (DIO), stakeholders at HMNB Portsmouth, VolkerStevin and Jacobs.

The team demolished sections of the existing jetties, which were up to 90 years old, and replaced them with modern structures. New infrastructure was installed, including navigational aids and high voltage power supplies to power the carriers when they are berthed.

Congratulations to the Corrugated Board for use in Military Level Packaging Project, which was run by Defence Equipment and Support’s Chain Services Defence Packaging Team, with the support of Military Packager Approval Scheme members, the corrugated industry and the Industry Packaging in Equipment Acquisition and Support Forum.

The project sought to update the Defence Standard, which sets the policy for corrugated materials used in packaging and had become outdated. The new, modernised approach gives greater scope for the use of commercially available materials in corrugated Defence packaging, maximising the utilisation of recycled cardboard to help support MOD’s Greening Government Commitments.

His achievements have included a station wide #PlasticFreeBrize campaign and the creation of a Sustainability Committee. In addition, Sgt Duffy’s work to replace non-recyclable air cargo pallet bags with a recyclable, carbon neutral version has prevented over 10.5 tonnes in plastic waste going to landfill, reduced carbon dioxide emissions by 27 tonnes and saved over £4,750 in packaging tax.

Congratulations to the Combined Heat and Power Plant Project led by the Royal Navy, MOD and BAE Systems staff at HMNB Portsmouth.

The new power plant was vital to accommodate the arrival of the Queen Elizabeth Class Carriers without driving energy demand to an unsustainable level. A new power management system was developed, and since going live in October 2019, the plant has reduced energy bills by more than £4 million in its first year.

The project involved the relocation of Eurasian curlews to boost declining populations in the West Country. The team worked with great care to locate and safeguard nests on seven airfields, with the expertise and close co-operation between the organisations enabling the transfer of 62 eggs to Slimbridge reserve on the River Severn, where the curlews thrived.

A special thank you to everyone involved in the 2020 Sanctuary Awards! Find out more about the projects, in the latest Sanctuary Magazine.

If you’re interested in entering the 2021 Sanctuary Awards, please email [email protected], who will be happy to help.

Secretary of State for Defence, Ben Wallace MP and Ambassador Dr Monica Juma, Cabinet Secretary for Defence for the Republic of Kenya, opening Nyati Barracks. [MOD Crown Copyright 2021] One of our ma...

A jaguar recorded by the cameras. [Copyright Panthera 2020] If you’re an avid reader of the weekend papers or follow the Ministry of Defence or DIO on social media, you might have already seen a stor...