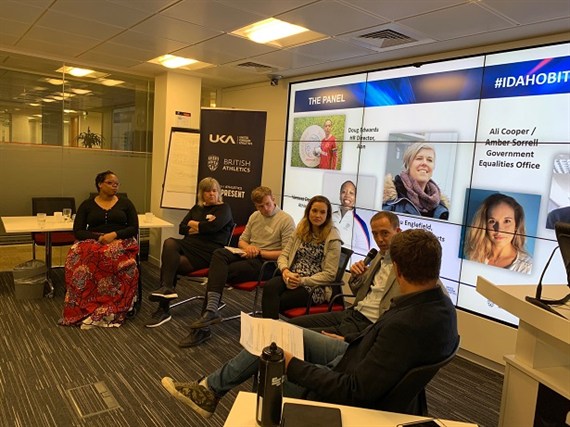 UK Athletics were proud to support a brunch event on International Day against Homophobia, Biphobia and Transphobia (IDAHOBIT) last month.

In support of this internationally recognised day, which takes place on 17th May each year, UK Athletics, Sport England, UK Sport and Vercida collaborated once again to deliver an event to discuss Homophobia, Biphobia and Transphobia, as well as inclusion in sport and physical activity.

Following an opening address from Interim Chief Executive of UK Athletics, Nigel Holl, a host of partners were invited to listen and contribute to two panels as well as roundtable discussions on related topics.

Also on this panel was Scottish Athletics’ Equality officer, Fran Snitjer, who gave an insight into the non-binary guidance for road running organisers created by the organisation last year. This was considered by UK Athletics as best practice; therefore, it was implemented across the sport in the UK from September 2018.

The wide-ranging discussion covered a range of experiences from the panel which was thought-provoking for all those who attended.

“I was really proud to deliver the opening address at the International Day against Homophobia, Biphobia and Transphobia brunch event held last week. At UK Athletics, we believe in diversity and inclusion whereby people are treated fairly, with respect, valuing people’s differences and treating people in a way that they wish to be treated.

“I extend my thanks to all those who helped to deliver the event; UK Sport, Sport England and Vercida, as well as all those attendees who contributed to the engaging and thought-provoking discussions on the day.”

Cathy Walker on being a Coach