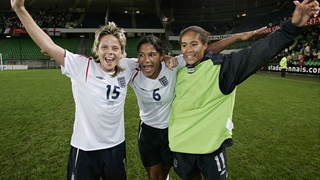 Our Elite Coach Placement Programme in conjunction with the PFA is now entering its third successful season and has also picked up momentum across England teams in the Women’s game.

England and Arsenal legend Yankey will join the WU19 squad, working with head coach Andy Spence, while head coach Lydia Bedford will have her WU18 squad strengthened by former Lionesses defender Mary Phillip, who won 65 caps for her country and was the first women’s player to compete in two FIFA Women’s World Cups.

Fara Williams, England’s most capped international, will be embedded with the WU17 squad under head coach Gemma Grainger while continuing her playing career with Reading. 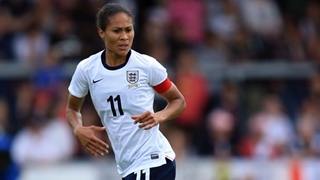 Rachel Yankey OBE is one of England Women's finest players

Meanwhile, Arsenal academy coach Coreen Brown will work alongside WU16 head coach John Salomon. Brown was first part of the programme two seasons ago and was appointed as assistant coach with the former WU14 squad.

The participants will be embedded with their respective technical coaching teams, assisting with the delivery of coaching sessions and participating in technical meetings before, during and after each international camp. They're all looking forward to sharing their experience of international football as well as them learning the art and craft of coaching on the international stage.

Earlier this month the four aspiring coaches, who already have their UEFA ‘A’ or ‘B’ licence, met online for their formal induction onto the Elite Coach Placement Programme.

The programme, which is jointly funded by the Professional Footballers’ Association, was introduced in 2017 to create opportunities for coaches from under-represented groups to work with the England national teams, aiming to build a bigger and more diverse coaching talent pipeline for the future.

The ECPP forms an important strand of our three-year equality, diversity and inclusion strategy, ‘In Pursuit of Progress’, which was launched in 2018 to drive meaningful change within the organisation and across the game, focusing on initiatives to promote equality and increase the diversity of those playing, officiating, coaching, leading and governing English football.

‘In Pursuit of Progress’ is a key part of our work towards tackling discrimination at all levels and ensuring opportunities are accessible for all.

See the details of our year-two review of ‘In Pursuit of Progress’.

Our director or women's football, Baroness Sue Campbell, explains more about the FA's new women's and girls' football strategy for 2020-24 Football has the power to change lives for the better. It can...