As an NHS front-line worker and a level five referee, Matt Arthur speaks on his career 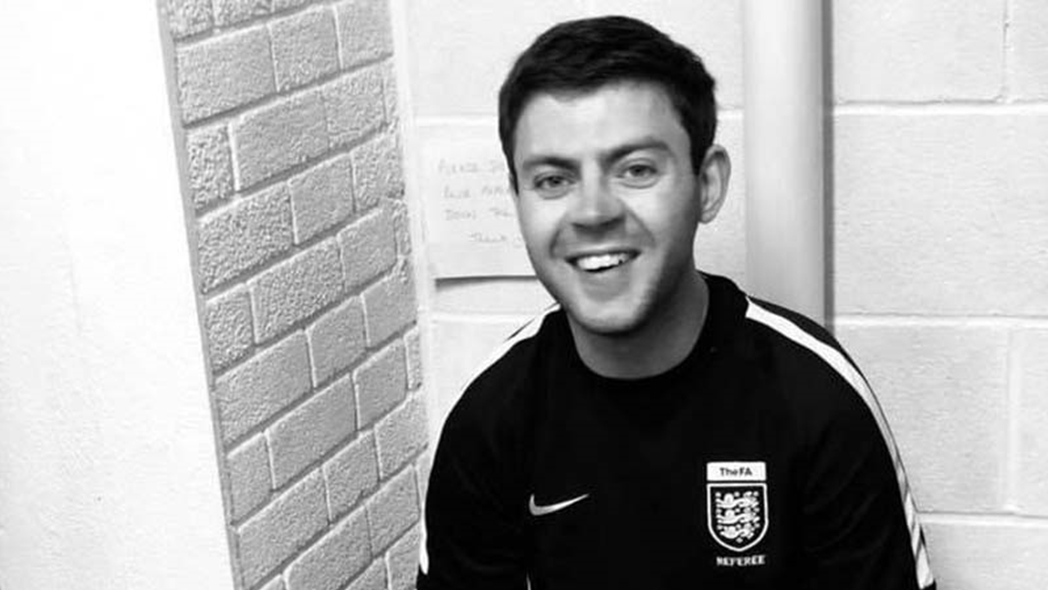 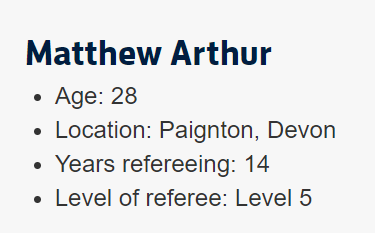 In the latest of our 'On The Spot' series we catch up with Matt Arthur, who's a Level 5 referee, aiming to step up to Level 4 soon and is also an NHS radiographer on the frontline during the COVID-19 lockdown...

Matt, let’s start with your work in the NHS, you’re in radiography…how have the last few weeks and months been?

Overall, COVID-19 will go down as a dark period for the country and NHS. Personally, I’ve found there’s been highs and lows. But mostly it’s been highs, the hospital has really come together as a team and there’s completely different levels of comradeship than there was before as everyone’s working hard to look after each other which has helped with developing coping strategies. When COVID kicked-off, we saw a significant decrease in what we were doing, mainly due to outpatient appointments being cancelled. That gave us a chance to plan and get ready for what we knew was coming, deploying equipment to the red side of the hospital and planning for the longer-term future. As we’re going through COVID, we’ve now seen our workload increase again, but the public have been great at only coming in when they’re really poorly or a few days later than they might’ve done when appropriate, such as having a limb injury and the swelling/pain not decreasing. It’s important to remember that the NHS is still very much open for those that need it.

How did you first get into refereeing?

As a boy, to be honest, I was never particularly good at football but my form teacher at school was a PE teacher and had an email from the Essex County FA offering a referee’s course at a discounted rate and if they’d like to put someone forward for it. So, the school paid for the course and for some of my first kits and in return, I refereed some of the school games.

What made you decide to take up refereeing?

With the backing of the PE department and the fact that it was much better than a paper round, I refereed kids’ football until I was 16 or 17. It was much more challenging than a paper round of course, but it gave me a greater sense of satisfaction. To be outside, whether in baking sunshine or sideways hail, I just loved it. When I went to university in Sheffield, I carried it on and even though I didn’t have a car, I joined the list of Futsal referees and did that for three seasons, travelling around to the National League facilities by rail or hitching lifts from the other referees on the game. After that, I moved down to Cornwall where I got back into 11-a-side refereeing and was really well supported by the County FA. That was what re-kindled my love for the 11-a-side game and it’s gone on from there.

The course was at the Southend Borough Council offices and we had one of the boardrooms. There was about 15-20 of us sat around a table and as a 14 year old, it was daunting. There was a full range of people, like veterans who couldn’t play but wanted to stay involved and then Essex Senior Football League players who wanted to understand the game better and then some older youth players who wanted to be refs. It was for ten weeks, for two hours every Monday night, and at the end we had an exam before sitting down with an instructor who’d take you through the laws of the game with a notepad of a pitch. My first game would’ve been the year seven or eights at St Thomas More High School in Southend, against one of the other local schools. I never kept records unfortunately, so I don’t remember my actual first game, as they all went in a blur. 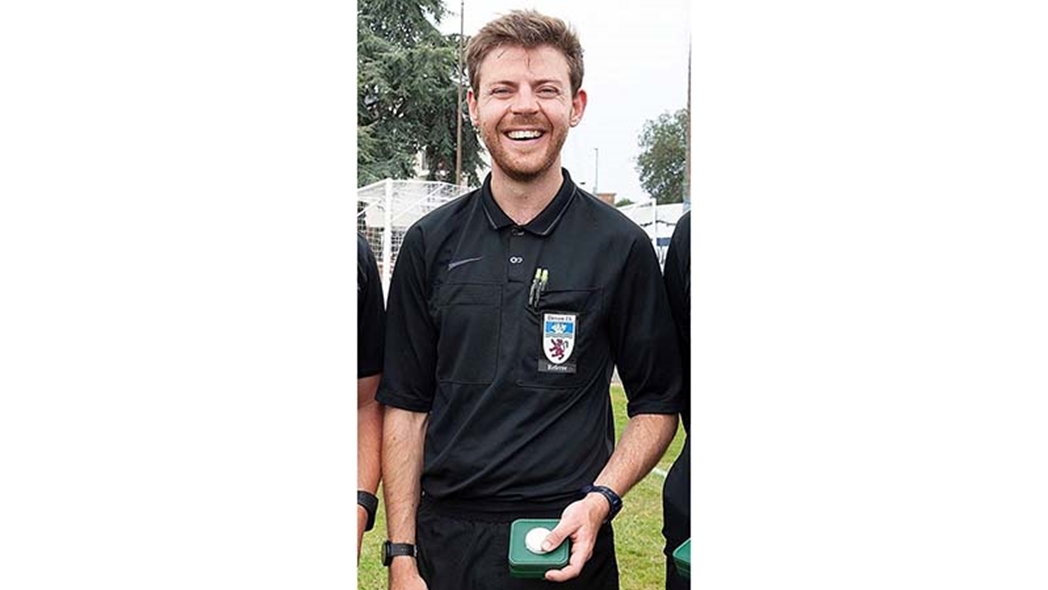 Is there one moment, good or bad, from your early experiences of officiating that springs to mind and has stayed with you ever since?

One game that sticks out is my first match refereeing a Southend United academy match a few weeks after passing my course, at U11 or or U12 level maybe. I was that nervous about refereeing at that level of the game and at half time, one of the parents came over to me and pointed out that I was giving the signals in a rugby fashion, in the direction of the defence and not the attack. It still makes me cringe every time I think about it. It was nice in a way though, as it was pre-Respect campaign and they had a tight grasp on parents at the academies. You could listen to them because they were there every week, watching their kids. The clubs took responsibility for their parents, so it was great to do those games as a referee.

What are the main benefits or enjoyments that you take from officiating?

As someone that couldn’t play football very well, I really enjoy being able to facilitate others to play and enjoy it. When I’m refereeing now in the Peninsula, Devon or South Devon League games and you get one that’s been a real spectacle, in which I’ve been involved as little as I possibly could be, then that really makes me enjoy the game. It’s nice to walk off the pitch at full time and for everyone to be talking about a goal or something like that and not be walking off receiving opinions from managers, players and supporters.

Do you have specific ambitions to reach a certain level in the game?

Back when I was 14, the FA Cup Final was the pinnacle for every referee, and as I get older, I still harbour those ambitions and would love to go as far as I can. As you step up the levels, you realise it is do-able if you push, but you have to be the best of the best. I’d be happy to go as far as I can and if that means walking out on the hallowed turf of Wembley for any game, that would be my refereeing career made. But if I make it as far as the National League, then I would also be perfectly happy with that.

Have you ever had a role model who you looked up to, or someone who has played a part in your success as an official?

I’ve had lots. The key one for me as a young referee was Howard Webb, with the way he had a no-nonsense attitude but was never arrogant about it. When he retired, it was Mark Clattenburg and then Michael Oliver, who is our top official now. I’ll watch them closely whenever I see a game that they’re refereeing on television.  The person who has shaped my career the most in the last five years is Paul Murphy in Cornwall. I was quite an abrasive referee at one stage, but Paul told me that I’d never get any further as a referee if I carried on as I was doing, so I needed to calm down. Through his help and advice, I’ve calmed down a lot and taken a different approach to the game so Paul’s input helped get me to that level. Then there’s the support that I’ve had at home, I couldn’t have got to games without my dad until I was 17, then mum sorting out my kit when I lived at home. All the way through to the present day where my partner is more than happy for me to be spending most of my Saturday’s travelling and refereeing games rather than spending time with her.

What would be your advice to anyone who is thinking of starting out?

You have to find the balance between watching what a Premier League referee does and then what someone who is more experienced at a similar level to you does. If you can find a local referee with more experience, part of the county development group or CORE that you can go and watch, or act as a mentor to you, it’s a great way to tailor your game. But just to get as much experience as possible is the main thing.

Talk us through your last game… What happened? What was the score?

It was quite a few weeks ago, obviously, but I was really lucky. The South Devon League made the decision to allow teams to decide what they wanted to do with regards postponing matches and I did a game at Brixham AFC, between their third team and Babbacombe Corinthians at a local park in Brixham with a fantastic view over the harbour. It finished 1-0 to Brixham and I had no cautions, no sending offs and it was probably the nicest game I’ve had this season in terms of communicating with players and letting them get on with the football. I think I only had to give about five free-kicks in the entire match so it was a great run out. I think it was certainly one of the last games to be played in Devon and I wouldn’t be surprised if it was one of the last ones in the country.

"No matter your disability or background, you can be at the same place as the seniors. That is huge" England Women’s Deaf team player, Jennifer Evans Every three months, St. George’s Park welcome...