On Wednesday 5th April the first exhibition dedicated to “queer” British art opened at Tate Britain on London’s Millbank. Featuring works from 1861 to 1967, the works on display relate to lesbian, gay, bisexual, trans and queer (LGBTQ) identities and the show marks the 50th anniversary of the partial decriminalisation of male homosexuality in England. Queer British Art 1861-1967 explores how artists expressed themselves in a time when established assumptions about gender and sexuality were being questioned and transformed. 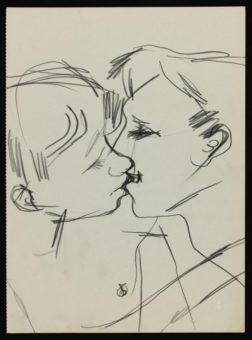 The “queer” theme has been difficult for the prevailing Tate because the word is now perceived, including by many gay, lesbian, bisexual and transgender people, as having derogatory connotations. Even among those who are familiar with the strand of cultural study known as “queer theory”, it can be controversial. When Tate announced the show last year some questioned the need for an exhibition under this heading. However, Tate Britain’s choice of title has a defined historical meaning: it centres on a moment of rapid social change and creative enlivening; a time when the term “queer” was in increasing, if surreptitious, use. The art is acquired from the period between 1861, when sodomy in England and Wales was no longer punishable by death, and 1967, when the Sexual Offences Act decriminalised consensual, private sex between men. Tate chose to use the broader term “queer” to avoid imposing more specific identity labels to works and artists whose approaches do not fall easily into categories such as ‘lesbian’, ‘gay’, ‘bisexual’ and ‘trans.’

According to the curator of the exhibition, Clare Barlow “this period is so crucial because until this point gender and sexuality remained almost undefined socially, or at least without label. And then through the First World War, new names and labels arrive, although of course, it is often still causing anguish. But it becomes a core facet of identity.” This identity is explored by artists in differing ways throughout the show, for example with relish by the Pre-Raphaelite painters or with tormented doubt by Keith Vaughn, who was constantly fearful that his work gave away too much of his “desires.” 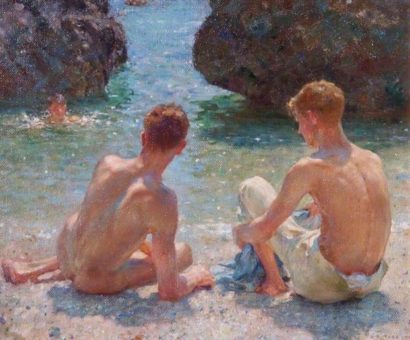 Profoundly personal and intimate works are exhibited alongside pieces aimed at a wider audience, which helped to create a sense of community when modern terminology of ‘lesbian’, ‘gay’, ‘bisexual’ and ‘trans’ were unrecognised. Together, they bring to light an astonishing range of identities and stories, from the light-hearted to the political and from the erotic to the domestic. There are many portraits of heroes throughout the show: the socialist activist Edward Carpenter, who lived openly with his lover, the labourer George Miller. Oscar Wilde, whose full-length portrait by Robert Godloe Harper Pennington is displayed alongside the prison cell door behind which Wilde was later locked up in Reading Gaol. With paintings, drawings, personal photographs and film from artists such as John Singer Sargent, Dora Carrington, Duncan Grant and David Hockney the diversity of queer British art is celebrated as never before.

On exiting the exhibition, visitors are encouraged to ‘write a caption.’ Tate hopes the exhibition will start conversations, that some of the objects and artworks on display may remind individuals of a particular event or time in their lives. Chosen captions will be put into the exhibition for everyone to read. Captions on display range from the simple, yet disparaging: “I don’t like the word queer” to the encouraging and positive: “I’m a bisexual Muslim, both my identities were constantly at each other’s throats, but I don’t intend to choose anymore! If you let go of your faith, your faith will never let go of you! Be both and proud!”

International Transgender Day of Visibility (TDoV) is marked every year on March 31. It is a time to celebrate transgender people around the globe and the courage it takes to live openly and authentic...

Allyship in the Community

The LGBTQ+ acronym and other variations of it represent a community of individuals united by their non-hetero and non-cis gender identity and sexual orientation. Being part of the community can create...