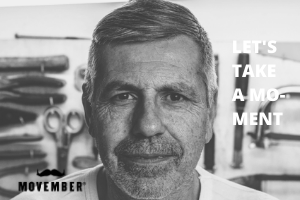 And consider some of the men’s wellbeing and mental health issues to talk about during Movember.

If you don’t know what Movember is, well you need to take a long hard look in the mirror. See a moustache – one that has appeared this November? No? Well here’s why we are asking…

Back in 2003, a couple of mates (Travis Garone and Luke Slattery) met up for a quiet drink in Melbourne, Australia and over their beers they joked about the fact that the moustache was almost an extinct male fashion accessory. As these things do, it led to creative male conversation as they wondered if they could bring the moustache back into style. But with a purpose! To literally be seen as the face of male health issues. So, the spark that resulted in the Movember movement was ignited.

Inspired by a friend’s mother who was fundraising for breast cancer, they decided to encourage men to unite through facial hair growth each November to raise awareness and sponsorship funds for prostate cancer.

Initially, they found 30 guys willing to take up the challenge and pay to grow a “mo” for the month.  Fast forward to 2019, millions of moustaches later and Movember is a global force in men’s health awareness, with official campaigns in 21 countries and over 5 million Mo Bros and Sistas following the movement. The focus too has broadened, to four key men’s health issues: prostate cancer, testicular cancer, mental health and physical wellbeing.

The Movember vision has been to have an everlasting impact on the face of men’s health and has contributed to huge advances in scientific research. What is incredible is that Movember is talked about around the world. By men, or we should say “Mo Bros”- and the “Mo Sistas” who encourage and support them.

The Movember movement captured the male imagination and as a result, has led to a much needed fundamental shift in the conversation around men’s health.

Like aftershave, the male domain has always been considered as built on “bottling it up".Men should show strength and dignity and to break personal silence has historically been considered weakness.

BUT WAIT A “MO”…  What has that stiff upper lip achieved?

Sadly, we are learning that today, one of the biggest reasons a man dies, is not because of a silent and deadly physical disease. It is as the result of taking their own life.

75% of all suicides are male and the masculine stereotype-based around an image of strong, heroic breadwinner is one of the critical pressures behind this.  Mental health challenges such as work-related stress, depression and anxiety all being triggers that can lead to a man taking their own life. Something that Movember is determined to try and change.

“We won’t accept this. To make change happen, Movember views mental health through a male lens. We focus on early intervention, engaging men and working to their strengths. By 2030, we aim to reduce the rate of male suicide by 25%.”

If you consider that a man spends at least 1/3 of his adult life at work, it highlights the wellbeing significance of the relationship between employee and employer. It is a huge amount of time away from family, partners, friends. Those hours, days, and yes, years are spent to a large part with people who whilst defined as “work” are able to influence mood and motivation. An employer or a colleague could be the lifeline to better wellbeing and should be taking responsibility for those who share such a large part of life alongside them.

Modern awareness of health & safety at work and an open-minded approach when it comes to diversity and inclusion means that a business environment can and must offer more support to those who are part of its activities.  The challenge is, identifying individuals who may fear for their employment and maintain what they consider to be a professional silence over personal challenges.

According to statistics published within the last 2 weeks over 600,000 employees were reported as suffering from work-related stress, depression or anxiety in the last year. For an employer that means 12.8 million lost workdays. Or put another way, nearly half of all working days lost for health reasons are due to stress, anxiety or depression.

So, how exactly can employees and employers strike a healthy balance. Let’s take a “Mo” this month to find out.