Staffordshire Fire and Rescue Service (SFRS) have recognised and rewarded staff and partners who made an outstanding contribution to the Service and the community at an awards ceremony on October 12th. 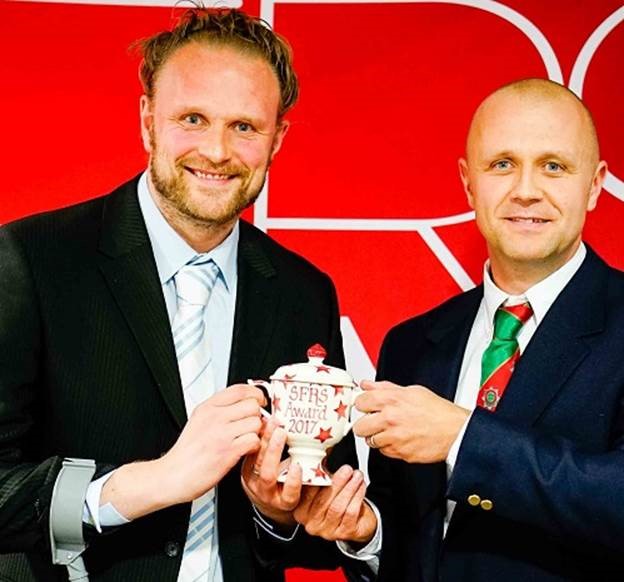 “It is so important to us as a Service to recognise the hard work all our staff and partners do everyday. Many of the winners were surprised to be given the honour because so many of them feel they are just doing their job. But it is so much more than that. Without them we could not protect and serve the public the way we do." -Chief Fire Officer Becci Bryant

SFRS’s Awards were held at Sandyford Community Fire Station and featured 12 categories. All the winners were given a ceramic trophy donated by Emma Bridgewater and all nominees were handed a certificate to honour their hard work and dedication.

The categories and winners were as follows:

Behind the Scenes Wonder  Caroline Firkins

Made My Day Award Rose Hampton

Outside the Box Mark Downes

Chief Fire Officer Becci Bryant said: "This year’s Awards ceremony was a fantastic night where we have witnessed some really inspirational stories and people." She continued “It is so important to us as a Service to recognise the hard work all our staff and partners do everyday. Many of the winners were surprised to be given the honour because so many of them feel they are just doing their job. But it is so much more than that. Without them we could not protect and serve the public the way we do. Each and every nominee deserved to have been recognised during the ceremony and it was a pleasure to so many of our staff enjoy their evening and support each other.”

Caroline Firkins Business Support Manager for Stafford, said: “Winning the award is really humbling. When I think about the work that Patricia and some of the others do I really just didn’t expect to win.”

Stuart Ruckledge, Based at Stone headquarters said: “I feel flattered but proud to have received this award as I could not have achieved what I have without the encouragement of my managers and the hard work of Central Prevent and Protect, Marketing and Communications, the Service Delivery Groups and our community stake holders.”

Harry Cameron, Community Safety Officer for Stafford said: “I did not think I was going to win despite it being a fifty, fifty chance. I’m still shaking now.”

Jude Russell, Communications Manager at Stone HQ, said: “I feel honoured to have been given this award, especially when I am sharing the evening with such wonderful and deserving nominees. Without a doubt this award also belongs to my team who have enabled me to do my job by being an amazing. Anyone nominated for leadership is only as strong as their team and mine is exceptional.”

Steve Knight, From Service HQ in Stone said: “I have been in the Service for nearly 45 years and I still love the job and don’t really want to retire. I felt really privileged to be nominated, and then more so when shortlisted and now I just feel so humbled to have won. Especially as Madeline the other nominee is such an amazing lady. I feel privileged to work for such an amazing Service.”

Rose Hampton from Stafford, marketing officer, said: “I really did not expect to win. I am so shocked but so pleased at the same time.”

Helen Wood, From Stone Service HQ said: “I am so surprised that I have won. I think I just do my job and I really love what I do.”

Tom Dooley said: “We are absolutely elated to have won. When we completed the job at Royal Stoke Hospital I said if that was the last breathing apparatus wear I ever do I will die a happy man.”

Paul Malpass said: “This is such a fantastic thing to keep. We will surely find pride of place to display it in the station. It is very humbling to have won.”

Stephen Ward, from Staffordshire Police said: “I am really surprised that I won when there are so many people doing such amazing work and I just go out there and worth young people, which is really something I think all police officers should be doing.”

Michael Folkes, volunteers to maintain the memorial garden at Service HQ, said: “Thank you so much. I just can’t believe it. It is a shame bob Flowers couldn’t come tonight. I am so grateful and so overwhelmed.”

Mark Downes said: “I feel really proud to have won this award and really flattered. It is really a team effort with the hard work and dedication of the cadet instructors, staff and volunteers. Without them the Cadet+ programme would not be the success it is. The award is not just mine but belongs to everyone involved.”

FF Mick Calladine, Retained Firefighter for Rising Brook and Instructor at HQ, said: “I have been a firefighter for nearly ten years and I had never been to a collision like this one. Doing the job itself was the easy part, it was going back and calling my dad and letting him know what happened and everything that came after that was harder. I’m really shocked that I have won the award because there are so many other people that equally deserved this. The other two firefighters, I mean what they did was amazing so I am just really shocked and really humble to have won.”

Local children in Plymouth have been given the opportunity to keep active in the lead up to Christmas with the help of Premier League Kicks football coaching sessions delivered by Plymouth Argyle Com...

Greatest achievement made by BAE Systems

BAE Systems, Inc. releases its first-ever impact report on diversity, equity, and inclusion A Decade of Progress reports on the progress BAE Systems, Inc. has made toward achieving its long-term goals...