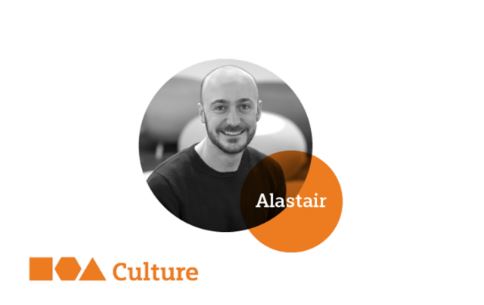 One of the founding members of Siemens UK’s LGBTQ support group, Spark, Alastair Mills is working passionately to promote inclusive behaviour and diverse thinking across the Siemens business. He explains how his first experiences with allies in the wider Siemens network inspired him to push for change and how he’s supporting others to do the same.

“Visiting Siemens Cary in North Carolina, I was amazed to enter the coffee room and see postcards of the rainbow flag that read “I’m an ally.”

At that time, the state was debating the Bathroom Bill, which forced transgender people to use the toilets of the gender they were assigned at birth, rather than the one they identify with. Siemens and a number of other global companies had made significant moves to signal their dissatisfaction with the bill, and as part of that they were also sharing information about the associated topics (including the postcards, leaflets, posters, identified contact persons) in their offices.

To see this, it made me think that maybe the company was actually willing to put its employees first, supporting and fighting for their beliefs.

“A year later, I was part of a meeting of LGBTQ staff and allies from both the UK and German businesses discussing how to better support our community. That was the moment where I decided I was going to stand up and do something.”

The meeting gave us the opportunity to speak openly with senior leadership about the challenges we faced in the business, without fear of repercussion. And we were listened to. That marked a real transition for me and the start of the journey to set up Spark, the group I chair.

“Spark is still quite a small group, but it’s already growing and having a real impact across the business.”

We started by building awareness, focusing on a couple of core sites where our community and allies could begin hosting events and engaging with employees. Next, we introduced visuals ranging from flags, posters and the option of rainbow lanyards for employees. These lanyards give people the choice to identify themselves either as LGBTQ or as an ally openly supporting the cause.

We then looked outside of the Company to promote our internal work. During Manchester Pride, we changed the traffic light lenses across the city with diversity symbols and we sponsored a charity to provide dedicated support services to over 600people during the Pride weekend It got people excited and really strengthened that association between Siemens and the LGBTQ community.

“All this activity has encouraged other people to stand up and say “I want to do something”. They’ve been empowered by what they’ve seen.”

So many people have engaged with our activities, attending them and then interacting with Spark members, wanting to know how they can help. We’ve ended up with many groups forming naturally around each location, all doing different things, but working towards the same goal.

“This year we’re doing even more.”

The Pride traffic lights are making their way to a number of UK cities, all driven by businesses, local councils and the general public who loved the initial campaign. It’s an amazing feeling to find that people identify with and appreciate what we’re doing.  With the energy and engagement from other UK employees it is amazing to think that Siemens will be represented at over 10 Pride events in 2019.

The result achieved by a team of like-minded people with a vision and unity has been inspiring. Employees are networking, discussing new ideas and innovating for us all. In my opinion the power of diversity has been proven in what the Spark community and [email protected] groups have achieved over the last year. That’s a direct result of the all Siemens plc employees who have been involved in our enterprise.

“I wouldn’t say that everybody is ready and feels able to stand up just yet. But they should know that, as a network, there are other members there to support them when they need it.”

I’ve had a lot of people in the business or the network coming to me with questions. That might not seem like a huge thing, but having these open conversations shows how far we’ve come as a business already. What we’re doing is definitely having a positive effect.

We’re now looking into training schemes for employees and management to build awareness of the community. It’s key we understand how to communicate information about our community and give people the support they need to be open and build their confidence.

“You’ll probably be nervous at first, but remember, there’s no right or wrong way to start a campaign or activity.”

Talk to people who’ve run things already and listen to their advice. Learn about what they’ve done, how they did it and why they did it. Then ultimately decide on your vision and what it is you want to do. Write down that vision and purpose, because once you have those, you can then start to see the road ahead and plan how you’re going to get there.

For me, having an executive sponsor on the journey with you is critical because it empowers you. Knowing that I have a board-level management team that I can talk to openly has given me the confidence to do things I otherwise wouldn’t have, because I know that I have their support behind me.