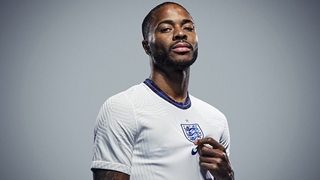 England and Manchester City's Raheem Sterling is the latest player to feature in Black, England and Proud

Birthday boy Raheem Sterling became the latest player to speak in our Black, England and Proud series, after sitting down with David 'Sideman' Whitely at St. George's Park.

On his 26th birthday, the Manchester City attacker and one of England's leading Black players discussed a range of topics such as his days growing up and how that's helped to shape him as a person.

And as well as chatting about his Jamaican roots and culture, Sterling also spoke about his pride at representing the Three Lions and his hopes for the future on the international stage.

"Growing up, footballing wise, my dream was always to put on an England shirt," he said.

"And I remember my first ever game for England U16s [a Victory Shield game with Northern Ireland at Chester], no-one could tell me I didn't make it as I was on TV, and live on Sky Sports

"Going into school the next day, that was it, you couldn't catch me and it was a great feeling.

"It is something that I can hopefully do in my career with England, try to bring a trophy home.

"As a nation, you saw it in the World Cup, everyone gets behind you and you can see what it means to everyone across the country."