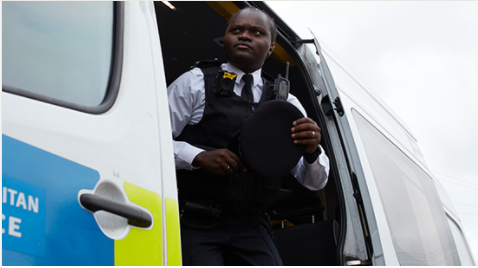 Following the encouragement of a friend, PC Mapianda began his career in the Met in 2019 and now works in the Emergency Response Policing Team.

Having previously worked in an office-based environment, initially both his family and friends were apprehensive about his sudden change in career but he was determined to help his community.

Over the past year, by sharing his experiences at work, he has been able to change the opinions of those closest to him, improving their confidence in the Met. He is committed to building and developing positive relationships between officers and the communities they police.

As a police constable new in service, what inspired you to pursue a career in policing?

I had a friend that worked in the Met, and encouraged me to join – but my main motivation was to make a difference in a city that has given me everything. I wanted to get involved and give something back to my community and London. It was also really important for me to keep people safe too and protect the community.

Having decided to become a police officer, have you had to overcome any significant barriers?

I have joined during the Black Lives Matter movement era, and my community does not have a good rapport with law enforcement in general. Some of my family members and friends are not happy and still distrustful of the police but since I have joined I have managed to change some of their views, my friend has even joined since! Yes there is still negativity and a lot of continued negativity from past experiences but if you have had a negative experience, the best thing to do is be a part of the change you want to see in the Met and join.

Do you think the role of a police constable is misunderstood?

I do - nothing comes close to working as police officer, it is a roller coaster of challenges. But you get to see in real time how you have helped others, the feedback is instant. The most exciting thing about my role is rising to challenges, no day is the same and every call is different.

What would you say the most challenging aspect of your job it?

Training does not prepare you for what you see every day, life becomes very real afterwards. It can be difficult to switch off and leave work at work after seeing the harsh reality of life every day – I’m still working on it.

Don’t be afraid to try and ask for help if you need it – it is ok to make mistakes, that’s how you learn. What stands out for me is the level of support colleagues are ready to offer, everyone wants you to succeed.

It means a huge amount to me, to celebrate the best in us and our roots and history. It is also a chance for me to educate myself on other cultures and understand these. It makes me proud.