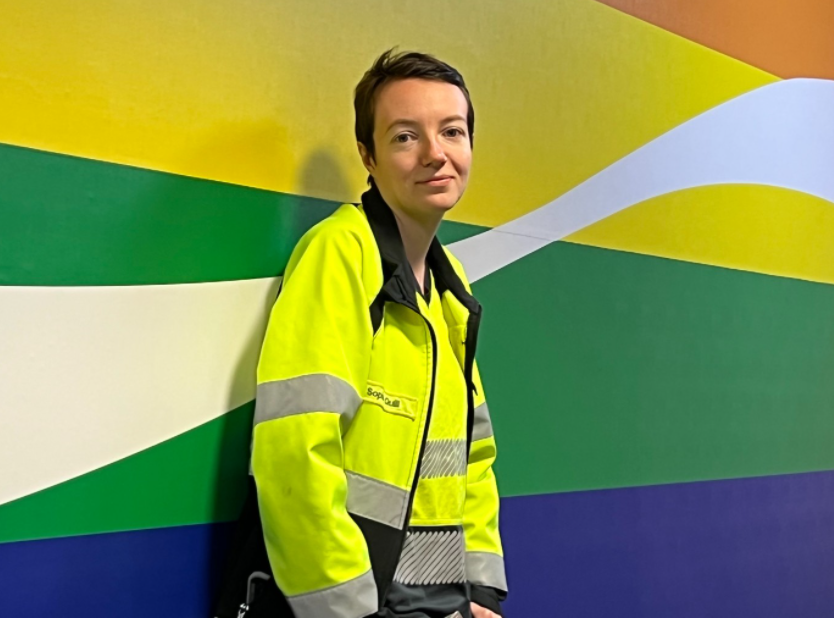 When I first joined CCEP in September 2019 as an agency Lab Administrator, I had never worked in manufacturing. I had to learn about the company and gain a basic understanding of engineering, microbiology and chemistry very quickly. It was like speaking a new language. Then, I had to learn something new all over again when I moved over to my Quality role in March 2020, however I was given lots of support by my friendly colleagues. There were plenty of challenges, especially starting during the pandemic. One of those challenges was coming out.

Being in the LGBT+ community, people always ask me for my coming out story. What they don’t realise is that coming out is something you never stop doing. Starting my new role in March, in a brand-new working environment, meant coming out all over again.

When I started at the company, I was already married. I would bring my wife up in conversations, in a way that cisgender men would mention theirs – it was my way of naturally telling people that I’m interested in women. I was incredibly lucky that when I came out at CCEP, there was no judgement. In fact, I was encouraged to join JustBe, one of the company’s Inclusion and Diversity Groups. For Pride last year, my site director, Karl Probert, even asked me to design a Pride wall – which is now a permanent feature here at Edmonton. I felt extremely accepted.

Coming out as gender neutral was harder. There were no subtle references that I could turn to. Instead, I used the internal CCEP social media platform, Redline, to help me. For Pride that year, I wrote an autobiographical article about being LGBT+ and heavily included my struggles with gender. I added my pronouns to my email signature. And all of this resulted in a change in the way people acted around me. Most made a big effort to use my correct pro-nouns. For those who didn’t, I knew I didn’t need to worry. I’ve always had the support of the business – so, no matter what, I know I belong.

After coming out, I’ve encouraged other people to put pronouns in their email signatures and to use more inclusive language. The best thing is that CCEP provides training on this. And soon, information about inclusive practices will be included in new-starter packs. A big step forward.

Much like with gender, I’ve come across struggles with my mental health – in the past and now. I wrote an article about my history with mental health and posted this on Redline too. The response was extraordinary. Since then, I’ve been asked to speak in site briefs and on calls about my experience. I’ve received emails and calls with people trusting me with stories of their own experiences.

At the end of last year, my mental health suffered. I still came to work – for me work gives me structure and stability. But I spoke with my boss and a few members of my team and explained my situation. I was empowered and supported by each of them in many ways. They encouraged me to take extra breaks whenever I needed, my colleagues checked in and made sure I was ok, and everyone made me feel at home – like I had a second family ready to back me up at a moment’s notice.

It’s this environment of trust, support and empowerment that has enabled me to feel my true self at work. With Inclusion and Diversity Groups available for everyone to join – this only makes the workplace stronger. I’m a member of several of these groups. Including our JustBe and Wellbeing teams.

Each month, our JustBe team meets to review the inclusion and diversity dates coming up in the following month. We pick a couple every month to focus on. Next month is LGBT+ History month. I’ve arranged for Deborah Penny – who is a trans woman from the British Army – to come to our Edmonton site and talk about her experiences. For the same month last year, I wrote one article per week about a different event in LGBT+ history.

As a part of the wellbeing team, I work with a group of amazing colleagues who are advocating a change in perceptions around mental health. As a part of this, we encourage people to talk to us if they’re struggling – pointing them in the right direction. We also provide insightful information and host events. Last year, we organised a wellbeing session for everyone on site – with games, quizzes, finance information and more.

I have truly fallen in love with this company. I have met so many people from so many walks of life. As a member of the team, I’ve enjoyed the opportunity to make a real difference. I’ve helped people feel seen and heard. I’ve inspired an entire team of people through education. And I’ve been involved in projects that can have an impact on people that I’ve never even met. That is the most incredible gift.

For me, this is genuinely a fantastic place to work – professionally and personally.

A person’s sexuality should never dictate their career opportunities or the respect they’re due. But some still need, and are actively looking, to be educated further. That’s why Jade feels so stro...

Meet Jennifer, Scotland's apprentice of the year 2022! This is Jennifer, and in her whirlwind of an apprenticeship at Coca-Cola Europacific Partners (CCEP), she’s gone from the first female enginee...