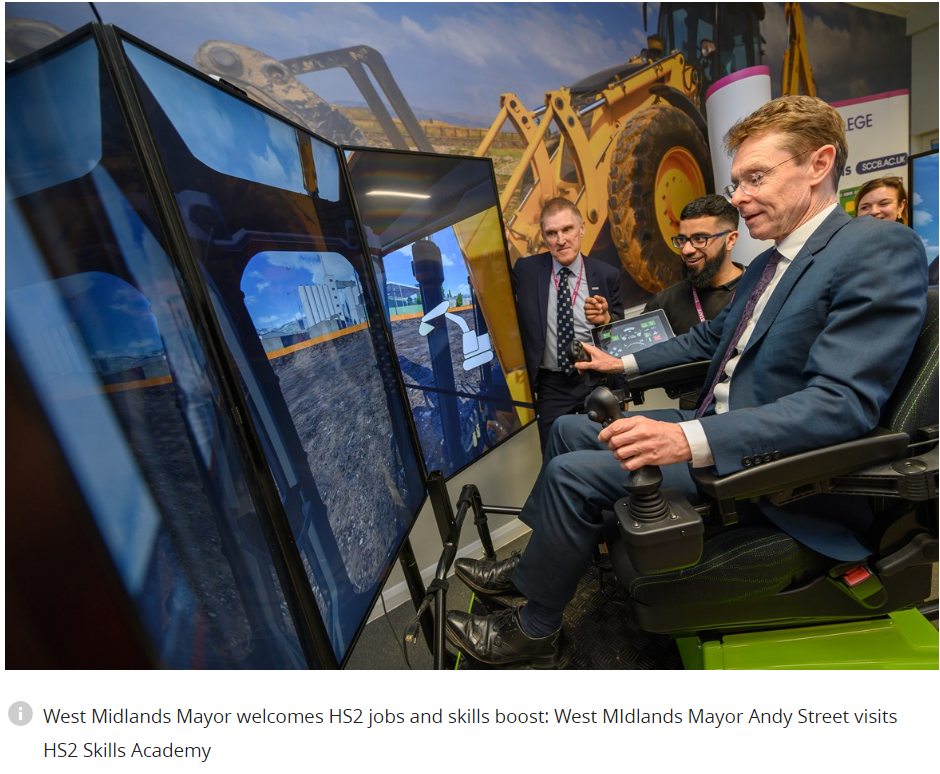 The Balfour Beatty VINCI Skills Academy, which sits within one of Birmingham’s most deprived wards, first opened its doors in November 2021, as part of a dedicated drive to upskill local people ready for work on HS2.

Since it opened with £1.1m backing from the West Midlands Combined Authority (WMCA), the Skills Academy has supported local people who were out of work into a job or onto further training in readiness for their chosen career path supporting HS2’s construction.

Today, the Mayor and Cllr Ian Courts, Chair of the HS2 Regional Enterprise Board, and leader of Solihull Council, welcomed the news that the Skills Academy is gearing up to train more people, ready to transition into 3,000 jobs over the next four years with Balfour Beatty VINCI’s labour supply chain partners. 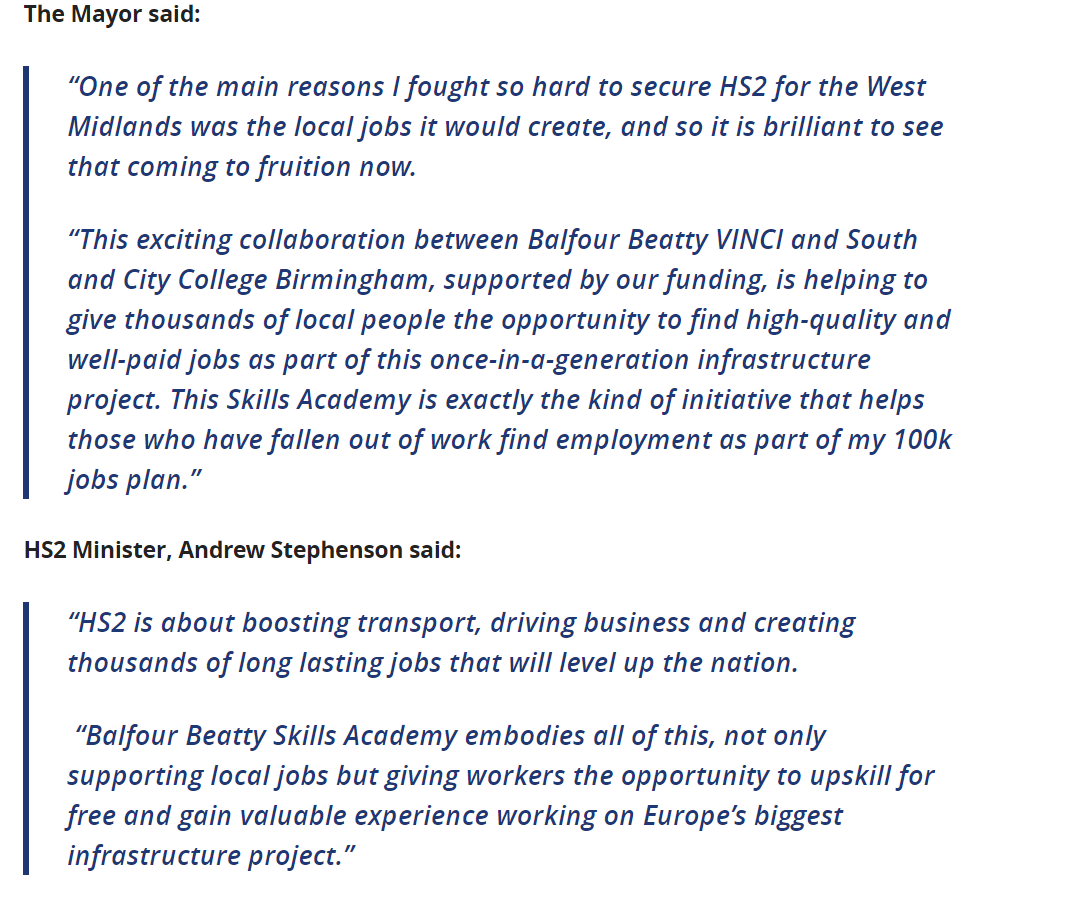 The BBV Skills Academy is the first of its kind in the region, but plans are in place to open more centres across the Midlands, making it easier for local people to gain the free training, accreditation and support they need to begin a career on HS2.

BBV estimates it will support circa 7,000 jobs to deliver its programme of work on HS2, and in the West Midlands, it is estimated that the construction of HS2 will generate a constant labour demand of around 10,000 jobs from now until 2027/28. 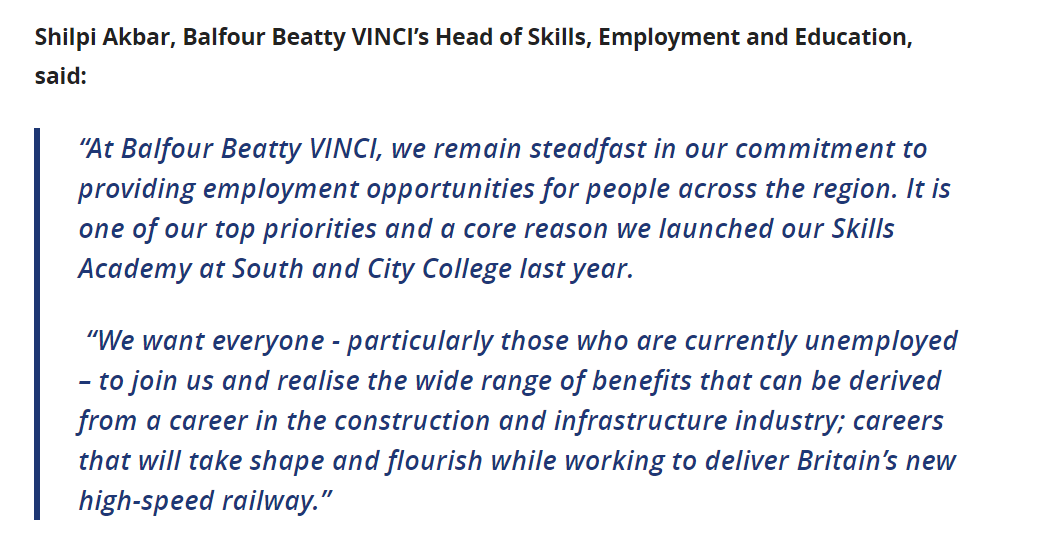 At the Bordesley Green campus, thanks to BBV’s partnership venture with South and City College Birmingham, students can gain hands on experience in plant machinery operation, traffic and fire marshalling, alongside nationally recognised accreditation from the Construction Skills Certification Scheme.

With no previous experience or skills required, students typically complete BBV’s specialist general operatives training programme in four to six weeks, enabling them to progress onto a paid work trial in their preferred construction career field. On successful completion of the trial, candidates are job matched to roles with BBV’s local labour providers, where they begin their career on HS2.

In a short space of time, the programme has supported people of all ages and backgrounds who were formerly unemployed into work.

René Nunes from Birmingham was unemployed for two years and was eager to find a job that provided long term security. Through HS2’s job brokerage partner model, which sees its contractors work closely with the Department for Work and Pensions (DWP) and National Careers Service to support local people who are out of work into a job on HS2, René was referred to the Skills Academy and onto the general operatives training programme. He is now working full time at HS2’s construction site in Water Orton and is a vital part of the facilities and maintenance team.

During the visit, guests were invited to meet with former trainees who have transitioned into employment, as well as students who have an expressed an interest in joining the next general operatives training programme.

35-year-old Imran from Sparkbrook in Birmingham lost his job during the pandemic. He’d always been interested in construction, particularly engineering and design. When he was given a flyer advertising the Skills Academy, and its free construction training programme, he jumped at the chance and registered for an induction.

Imran completed his training in just six weeks and  is now working with BBV’s surveying team at the Washwood Heath construction site which will be home to HS2’s train depot and control centre. 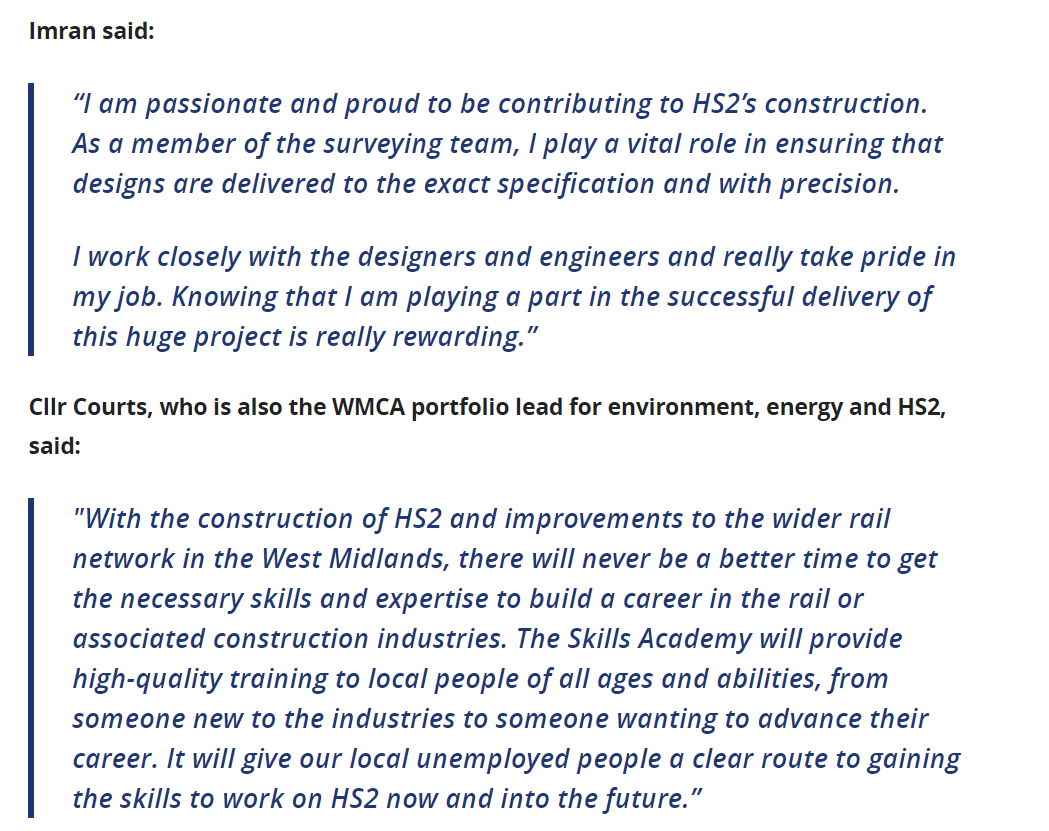 An Animal Behaviour and Welfare graduate from Birmingham, who is passionate about wildlife conservation, has launched a new career on HS2 which is allowing her to fulfil her dream of caring for ani...

To mark International Women’s Day, HS2 and its construction partners are hosting a number of local initiatives to encourage more women to step forward and consider a career in construction and enginee...

Family-business Draper Civil Engineering has reported its highest ever growth, thanks to a series of back to back contract awards from HS2’s construction partners.     The company, which is ru...