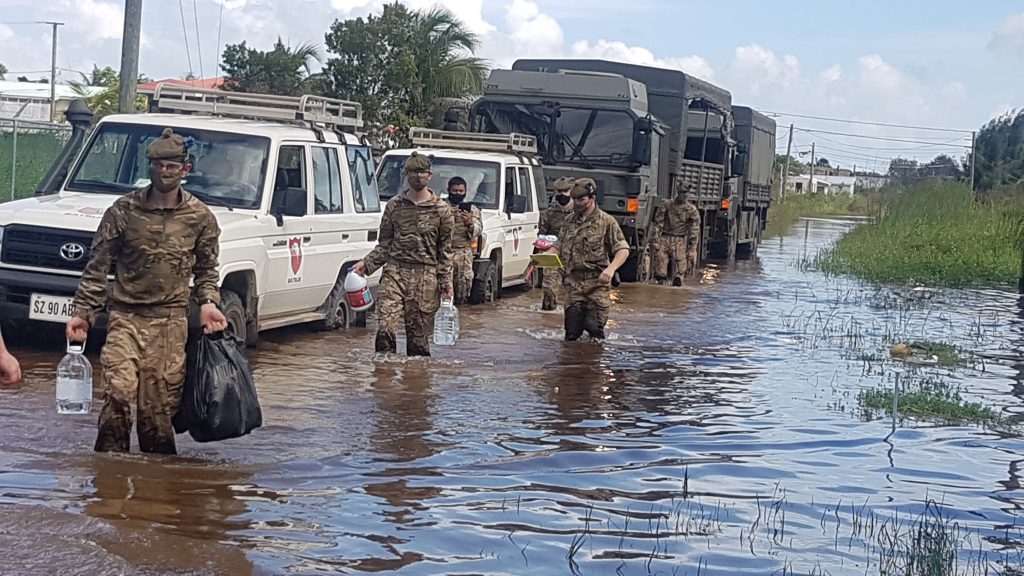 Soldiers support the local community in the wake of hurricane Eta. [Crown Copyright/MOD2020]

It was a busy year for DIO staff in Belize. COVID hit in March and this meant that British Army Training Support Unit Belize (BATSUB) was reduced to minimal manning levels, exercising troops were re-deployed, our temporary staff were sent back to the UK and the majority of our locally employed civilian staff were sent home for a lengthy period.

BATSUB has a licence to train up to 3,750 personnel a year in Belize across a network of both Government and privately-owned land, alongside the Belize Defence Force (BDF) and other foreign forces.

Protecting the Belizean environment and its people is paramount and I’m proud to say that during 2020 we did this.

When the COVID pandemic struck in March BATSUB delivered and aided various branches of the Belizean MOD (including the BDF) and the Belizean Coast Guard (BCG) as well as NEMO). My team and I delivered and issued emergency insect repellent to NEMO for those stuck in shelters. Ration stocks, originally planned for military exercises, were also supplied to both BDF and BCG.

In May Belize suffered numerous fires. Using Astrum helicopters we flew over a huge portion of the country; we identified, recorded and reported fires to various agencies. This helped local authorities and landowners prioritise and direct assets to where they were needed most which helped save animals, habitation, farmland, forestry, crops and people.

During the latter half of the year we supported the relief effort due to the severe flooding from Hurricanes ETA and IOTA.

DIO staff along with newly arrived exercise troops of Royal Dragoon Guards (RDG), NEMO, BDF and BCG were central to the relief effort in the aftermath of Hurricane ETA. Water in some areas of the camp was over four feet high.

At DIO BATSUB we’re working with Panthera – an international charity dedicated to the research and conservation of big cats – to monitor wildlife to assess the effects of military training and specifically live firing  with respect to mammalian species. Many of the cameras that Panthera use for this research were burnt in the forest fires that ravaged the Belizean jungle last year. Using DIO Overseas Stewardship Fund money, DIO replaced 20 cameras so that Panthera can continue this valuable research.

Staff efforts second to none

During 2020 I was not only proud of my staff and their willingness to help but really humbled by what I witnessed and how the local people of Belize deal with adversity.

At the forefront of the planning for these crises DIO advised on safety matters for those deploying, conducted close liaison with NEMO and BDF to prioritise tasks and advised on joint recce’s with NEMO, BCG and BDF. My team acted as guides, low level interactive liaison advisors, provided safety and utilised their local knowledge and skills.

During the floods the people of Belize had the prospect of living in a busy hurricane proof shelter for weeks to come during a COVID pandemic, having already lost some of their possessions, yet they still met us with a genuine, grateful and warm appreciative smiles.

Together with soldiers from the RDG, NEMO, BCG and the BDF we were able to support the local community in the wake of hurricane ETA and we are all really honoured and privileged to have played such a key role during this emergency.

It’s all in the planning

In Belize, we often cope with tropical storms, flash floods, extreme weather and widespread fires, although the COVID pandemic was a new one last year! Being ready for these types of events is crucial.

To prepare for these types of crises we run joint exercises with the help of BATSUB and DIO. These test the skills, readiness and response of Belize emergency services in the event of a real-life environmental disaster and mass casualty event.

It’s great to see all the different agencies working well together under pressure, and the exercises help to assess everyone’s ability to communicate and report to each other during an incident.

In 2020 we were glad of these exercise as they really helped us prepare and work better together as we supported the people of Belize through a variety of challenges. Let’s hope 2021 is slightly easier!

A jaguar recorded by the cameras. [Copyright Panthera 2020] If you re an avid reader of the weekend papers or follow the Ministry of Defence or DIO on social media, you might have already seen a stor...

Rebecca Jenkins is new to the conservation group team at Westdown Camp [Crown Copyright/MOD] Friday 5th June marked World Environment Day and I d like to tell you about the important role that our con...

The coveted Silver Otter Trophy [Crown Copyright/MOD2017] This week we hosted the first ever virtual Sanctuary Awards ceremony! The Sanctuary Awards have been showcasing outstanding sustainability an...

The Sanctuary Awards showcases MOD’s commitment to a sustainable estate

Last year's winners of the MOD Sanctuary Awards [Crown Copyright/MOD2019] The Sanctuary Awards showcases MOD s commitment to a sustainable estate and celebrates the achievements of teams and individua...