Nigel Walker OBE has said there is ‘no silver bullet’ that will increase diversity in sports administration and leadership, but by working together as a system, opportunities could be increased for underrepresented groups. 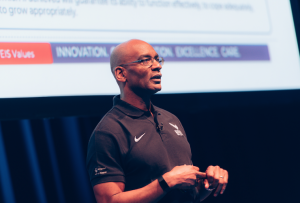 Former international athlete and rugby union player Walker acknowledged that there was a long way to go, with 64% of funded sports bodies having no Board members from ethnically diverse backgrounds* and highlighted that identifying the areas of greatest need and getting the basics right was fundamental.

One of the key areas for the EIS is recruitment and Walker explained some of the steps being taken to widen the applicant pool and ensure the right opportunities were reaching the right people.

“We have no difficulty attracting people to work in the EIS, but we have traditionally had insufficient diversity of backgrounds and experience in our applicants, meaning we miss out on new perspectives, different approaches, greater creativity and innovation.

“We have undertaken an end-to-end review of our recruitment training, processes and policies to mitigate bias and remove barriers for underrepresented groups. We have also appointed a lead role, shared with UK Sport, to drive this area forwards and I’m delighted with the progress being made so far.”

“In a relatively short space of time, we have started to make some really significant advances in the area of recruitment. All of our roles now offer flexible working and, in most cases, remote-working too; we are reaching out specifically to candidates with ethnically diverse backgrounds, those with disabilities and career returners and we are using non-gendered language in our job descriptions.

“We are also planning a number of targeted positive action initiatives, such as outreach, mentoring, sponsorship and apprenticeships, to attract, retain and develop underrepresented people in the sports sector.”

“A lot of excellent work is taking place across the high performance system but it will take a continued, joint effort for us to bring about real change in the long term,” Walker concluded.

The English Institute of Sport

World Mental Health Day at The English Institute of Sport

World Mental Health Day provides a chance to talk about mental health in general, how we can look after it, and how important it is to talk about things and get help if you are struggling. With UK Sp...

For the first time ever UK Sport and the English Institute of Sport (EIS) are collaborating with Team GB, ParalympicsGB and 19 Olympic and Paralympic sports to launch its latest search for the athle...

The English Institute of Sport (EIS) is supporting Middlesex University London with a new scholarship that aims to address the clear underrepresentation of Black, Asian and people with other ethnicall...

Shining a light on some of our work during COVID-19

The past few months may have been a strange and challenging time for everyone but, over the next week, the English Institute of Sport wants to share some of the story of how the organisation has suppo...