The latest good news from the School of Cultural Studies & Humanities. 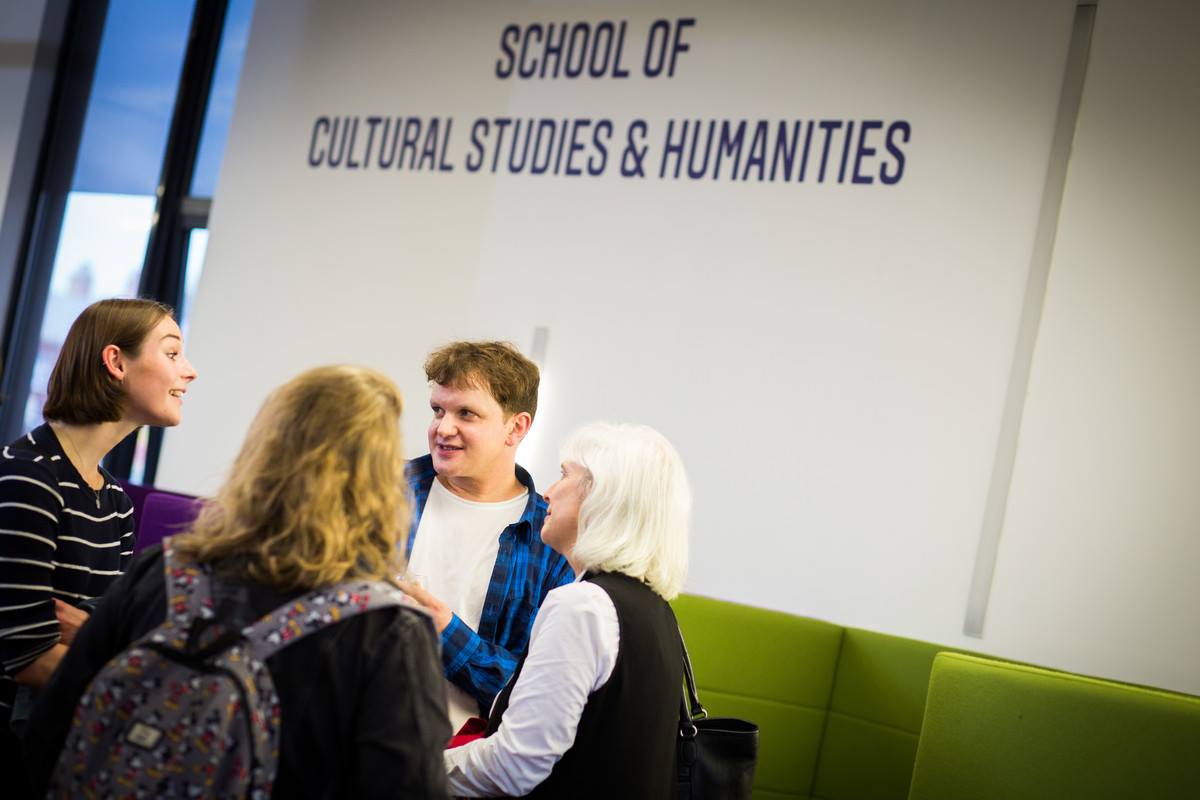 Dr Rachel Connor and Professor Susan Watkins recently hosted international writer in residence, Diane Cook from the US, as part of Leeds Lit Fest (which ran 4-8th March).  The residency was made possible by a successful funding bid to the British Council by the School of Cultural Studies and Humanities at Leeds Beckett and Leeds Lit Fest. Diane Cook, a writer of dystopian fiction, has created her first short story collection called, ‘Man V Nature’.

The story collection was shortlisted for the Guardian First Book award as well as her forthcoming novel ‘The New Wilderness’ which will be published by Harper Collins in August 2020.  Diane’s remit for Leeds Lit Fest was to open and close the festival and to present her ‘outlander manifesto’, a series of reflections on this year’s events, as well as her challenges and provocation for 2021. Professor Watkins, author of a newly published book called, ‘Contemporary Women’s Post-Apocalyptic Fiction’ (Palgrave) chaired the opening event of the festival at The Leeds Library. Professor Watkins hosted a reading and Q&A, which focused on the key concerns of Diane’s writing: the environment, community and motherhood. Diane also spent time meeting final-year creative writing students at Leeds Beckett, speaking to them about their development as writers. The presentation of the ‘outlander manifesto’ – coincided with International Women’s Day. It was curated and chaired by Dr Rachel Connor and held in the auditorium of the Carriage Works Theatre. In her manifesto, Diane made some recommendations around how to further embed the diverse communities in Leeds and praised the festival’s ambition, its strong regional identity and the inclusion of art forms other than literature. Chapel FM recorded the event and the recording, along with the script of the manifesto, document the event and provide a clear legacy of the festival’s impact for the future.

Robert Burroughs is on the Scientific Committee of a new research project led by Benoît Henriet, Amandine Lauro, and Pieter Lagrou, on digitization of Belgian federal archives on trial records in the colonial-era Congo. The way in which this is funded is by the Belgian Federal Scientific Policy as part of its BRAIN 2.0 initiative.
Further, interviews with Rob are featured in two articles on the history of European colonialism in the Congo in the Danish newspaper Kristeligt Dagblad (20 January 2020).

Aaron Andrews (sic) is quoted right at the end of this Huffington Post article on the New Crossfire and Black People’s Day of Action, which he’s researching as part of the Forged by Fire project.

Professor has research accepted to be published

Prof Jayne Raisborough along with colleagues from Surrey (Dr Paul Hanna) and Brighton (Dr Carl Walker) have had their research on newspaper representations of the NHS accepted. Their paper "Representations of the National Health Service (NHS) in UK print media" will be published soon in the journal ‘Health Promotion International’. Generating negative news coverage of state welfare provision has been identified as a strategy designed to create public support for radical policies aimed to reduce such provision. To date, research of this kind has focused on scandals and crises. However, little is known about the complex relationship between media representations of specific events, and those of media representations in the lead up to these events, what we refer to as periphery representations. This paper analyses the frequency and intensity of peripheral representations in terms of their negative and non-negative messages in representations of the National Health Service three key events in recent NHS history: the official consultation period for the Health and Social Care Act (2012); the publication of Five Year Forward View, and the first Junior Doctor Strike. We found that negative NHS representations in articles that are peripheral to particular topical issues of controversy evidence fluctuations, amplifications and intensities across time periods, depending on the particular context. We hope that this focus on the ways in which amplifications and de-amplifications in negative intensity of peripheral NHS representations across time and content, helps to contribute to the debate about the complex interplay between public health services, media representation and policy consent.

Rachel Connor, Jayne Raisborough and Susan Watkins have been successful in securing funding from the Flexible Grants for Small Groups scheme from the Independent Social Research Foundation (ISRF). The project uses creative writing workshops to examine and begin to challenge the workings of ageism in the cultural industries. The project brings cross-field cultural workers (actors, directors, dancers) into a close partnership with academics to promote social inclusion.  It aims to democratize the research process by bringing the voices of the cultural workers into the co-production of data and analysis of the research.  Their research will encompass local and national participants and will run from October 2020 for a year.

WorldSkills UK - Achievements made in 2021

The end of the calendar year is a time for reflection and celebration so we look back on a busy year of using international best practice to raise standards in apprenticeships and technical education...