Celebrating Pride will be different for the second year in a row due to the COVID-19 pandemic. James and Iain from the UK Pride Alliance at Aon share with us their experience and suggestions for celebrating Pride from the comfort of our own homes.

James Burke has worked for Aon for 20 years.  In his day-to-day role, he advises trustees around ways to manage and run their occupational pension schemes. He is currently co-chair of the Aon Pride Alliance. 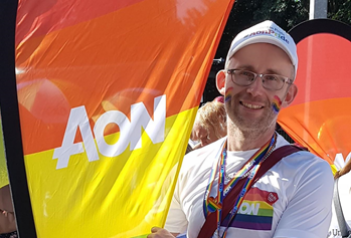 Iain Chapman has worked for Aon for 15 years. For the past five years he has worked on the Diversity & Inclusion agenda and seen Business Resource Groups at Aon, of which the Pride Alliance is one, go from strength to strength. 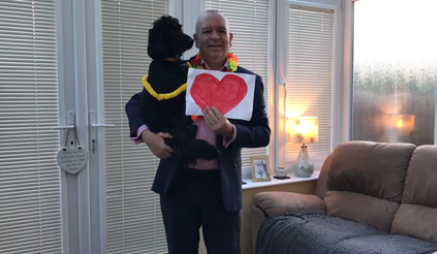 How and why did you join Aon Pride Alliance?

James: I have been in this role for about 4 years now, helping my fellow committee members drive diversity & inclusion forward. I first found out about the Alliance through a colleague on Facebook, and I saw that they are a member of the alliance. This encouraged me to find out more about it. Back then, members of the alliance were mainly LGBTQ+, but in 2016 we decided to expand the membership, building up an Allies Programme. We've been doing that for five years now. Part of my role has been going around the country trying to visit as many of our offices as possible to spread the message that Aon is a diverse and inclusive employer and encourage colleagues to join up to support the cause. Having allies is the best way to spread our message. If I, as a gay man, stand up and say something, people will say ‘well, you would say that because you're gay,’ whereas if an ally stands up and says it, then it has a lot more power and gravitas I feel.

Iain: I'm a straight man in his 50s, but as an ally, I am supportive of the Pride Alliance Network among other networks. It's really about treating everybody as you would wish to be treated yourself. It doesn't matter what your sexual orientation is, what ethnicity you are; it should be about supporting everybody and treating everybody as an equal. We shouldn't have to be discussing this in the 21st century. However, you see a lot of bullying going on social media. And so it's down to people like myself and many other allies to stand up and say, ‘Let's just be supportive.’

The way I live my life is no different to the way James lives his life, apart from we support different football teams. But some people would say, ‘Hang on a minute! He's gay, I'm straight.’ That shouldn't be a way of life in 2021. We've got a brilliant Ally Guide explaining how you can support colleagues and how you can challenge behaviours. If you hear somebody making a comment, rather than just brushing it under the carpet and pretending it didn't happen, it shows you how to challenge those microaggressions. 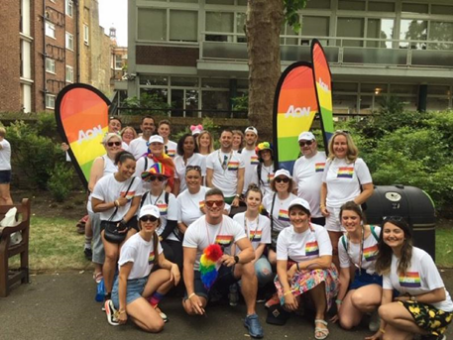 How do employees engage with the UK Pride Alliance?

Iain: We encourage colleagues to join events and learning sessions, read the Ally Guide, talk to people and learn about the conversation. It's a big part of our culture, making sure we are engaging 50,000 colleagues across the globe in this conversation.

James: We organize educational events and celebrate certain days. We also have some social events with Opening Doors London, which is an LGBT+ charity for people aged 50+. We hold movie nights for them and we invite them into the office to watch movies, have a few drinks and eat some popcorn. So that's something that we haven't been able to do for some time because of the pandemic.

How have things changed due to the pandemic?

James: In some ways, the pandemic has actually solved a problem I've always had in the past. As I said earlier, I've tried to go around all offices, but we were struggling to hold the same event in every office around the UK at the same time. Now we're all getting used to video calls and that means that we've been able to reach far more members and allies across the UK. We are planning on doing things differently going forwards, and I think we are looking at trying to maximize attendance across all the offices through streaming events so that people can access them anywhere. 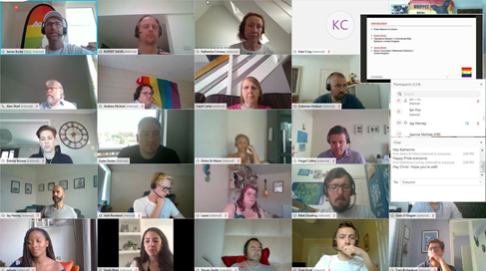 Iain: Personally, I was a little bit worried because my job was to get in front of people in different offices. I was very concerned about how it would impact my job, but I think COVID has given us that opportunity to be the most inclusive we've ever been because we can reach people who've never been reachable before. People aren't going to pay 100 quid for a train fare to attend an event in London, but now we can do it virtually and everybody can join at the same time. When we did Pride 2020, we could all dial into events that were happening all over the world through Aon intranet. We could all celebrate together, now that we are connected globally.

How would you describe the impact of the Aon Pride Alliance?

James: I think, especially in the last few years we have had a massive impact on Aon in terms of encouraging the LGBTQ+ agenda and making several changes within the business. Last January, we made the Stonewall top 100 for the first time as an inclusive employer. That was a big step for us. One of the things that would explain how we managed to do that is the support we introduced for trans colleagues. We introduced the Transitioning at Work Policy for the first time within our head office in London. We introduced gender-neutral toilets on every floor and encouraged our healthcare providers to make sure trans colleagues were also covered.

Iain: And before that, we introduced rainbow lanyards for ID cards that we scan to get into our buildings. The idea was basically to encourage colleagues to show their support. So new LGBTQ+ colleagues who may not feel as comfortable being as open as they might be in a new business would feel included when they see the rainbow lanyards. The most important thing when you go to work is that you can be yourself every single day. This way we will get the best out of our colleagues. If you're hiding something, be it your sexuality or disability or a mental health condition, you're not going to be your best self.

What have you got planned for celebrating Pride this year?

James: I would start by just explaining what we did last year which has been so effective. We basically chose one day when we were all going to celebrate Pride in June and then we passed the baton around the world. Events would be a couple of hours in length. The first hour would be educational and in the second there would be a celebration element. It was up to individual countries to decide what they wanted to do. We started off with events in Australia and then we handed the baton over to Singapore and then Poland, the Netherlands and the UK who joined forces of Ireland. We hadn't done that before so we did a joint UK and Ireland event for the first time.

This year we're trying to cover Pride for the whole month. The first week is going to be a celebratory week, where each country is going to hold celebration events. One week is going to be around outreach to charity fundraising. We're also having a week about the importance of being an ally. We've also got this concept of a human library where colleagues are able to listen to each others’ stories. Our colleagues in Poland are helping to pull that together, inviting speakers around the world to talk at these live sessions on our global intranet.

Iain: One thing I'm really keen on as a person is to educate and be educated. As an ally, I will have a look at the timetable, and I will try and make as much time as I possibly can to join as many events as I can. I think pride for me is one of the most fun events that you can get involved in throughout the year. It's just got such a feel-good factor; it's bright, it's colourful, it's loud, but at the same time it's very meaningful and educational. I'm looking forward to seeing what the various pride networks have got lined up.

How do you think people can celebrate without any parades going on this June?

James: Well I imagine that most people will still have a pride flag somewhere in their house. Even if you're not feeling comfortable about being able to put it out the window, say put it up inside your house. I'm sure there's going to be a lot of virtual events and podcasts over June as well, so just look out for events. There will be lots of interesting content out there. I know we're all desperately yearning to have some social contact. I think London Pride is being rearranged for September, Manchester pride is August bank holiday weekends, and so on. So, until we can socially connect safely, I think it is best to stay at home and just join virtual events.

Iain: Encourage your friends and get your family involved, you know. I could hold my own pride event, with my friends. I don't have to be LGBTQ+ to organize a pride event. We could have our own event as a small group, so why not?

Bringing your authentic self to work: LGBTQ+ inclusivity at Aon

Laura Jenkins talks about the positive, supportive environment that has been created at Aon and how it has helped her career progression. I joined Aon more than five years ago as a Director and O...

Celebrating a personal decade of diversity and inclusion at Aon

In his 10 years at Aon, Josh Rowland has always found diversity and inclusion for everyone embedded in the company’s culture. I joined Aon straight out of college on an apprenticeship programme....