Windrush to me is incredibly deep rooted for many reasons, mainly due to my Grandparents and my mother being part of that generation. Hearing their stories helped me realise that Windrush is more than the physical act of migrating from the Caribbean to London by boat, it’s also about the sacrifices people of that generation made, the hard work they put in and the painful experiences they endured moving their whole lives to the UK. 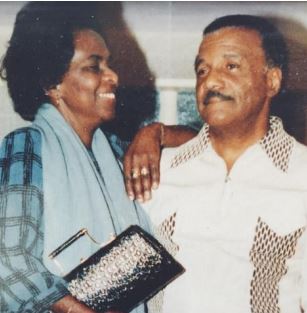 Sadly, my Grandparents are not here with us anymore, my Grandad passed at age 86 in 2016 and my Nan aged 93 in 2020. From the stories they shared with me and the details my Mum and her siblings have given me (as they too migrated at that time) I can share with others what their experiences were and why they came to London.

In 1960 My Grandad Rudolph Joseph O’Mallo left Guyana to start building a better life for their children. He travelled on a boat to Trinidad and Tobago and from there to London, at that time coming over from Trinidad or Jamaica was most common. 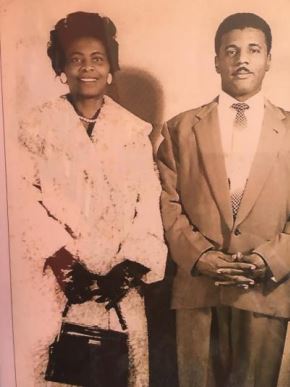 My Nan Sheila O’Mallo, their two daughters and their son stayed in Guyana and migrated to England later in 1964. Between 1960 and 1964 my Grandad returned to Guyana for my Nan and they left Guyana together and travelling again on a boat to the UK, leaving their children with their grandparents, to help my grandad prepare for the family to move and reside in London together. The photo above was taken the day they left for the UK together.

As a mother myself I cannot begin to fathom how that sacrifice must have felt, to leave your young children across the world and the fear that must have come with that. To start a new life 4660 miles away from all they knew to be home on a journey by boat that now takes up to 18 hours by plane. Scary and brave are words that come into my mind.

The plan was for my Grandad to come over first, find work and a home followed by Nan coming over finding work and then returning to Guyana for their children. My Grandad had already found work, he was a carpenter by trade in Guyana and continued carpentry here working in Brixton. My Nan was a nurse in Guyana but when she arrived in London she found it very difficult to find a job in that field and instead became a seamstress in Aldgate East.

They lived in a house share in New Cross, London whilst saving up enough for the boat fare to bring all their children over together as she did not want them to move to England one at a time. Four years later in 1964 they bought a family home in Deptford and my Nan got a job in a care home where she worked until I was born in 1993.

August 1964 my Nan spent £200 on boat tickets for her and the children and returned to Guyana to get the brood. Speaking recently with all three of them about their experiences coming over I found It amazing how my mother, aunt and uncle can recall that time so clearly over 60 years on from their arrival. 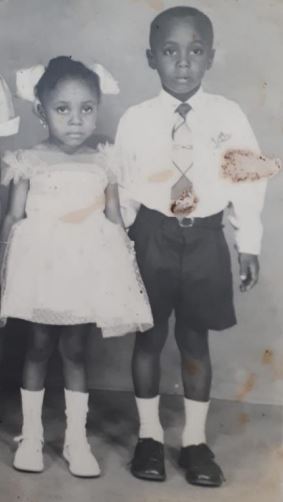 Cold, scared, shocked – when I spoke with them separately these are the words they all used when describing being on the boat over from Trinidad. My mum aged nine, my aunt aged six and my uncle aged eleven remember sharing a bedroom on the boat with a complete stranger. Suitcases were referred to as ‘grips’ back then and they remembered their suitcase was made from a cardboard like material with a huge stamp on it.

When they arrived in London they recognised the cultural difference immediately, no one looked like them and that was scary for them as youngsters, they felt like they had entered a “new world”.

When they arrived Grandad was waiting full of excitement – whilst my uncle and mum ran over to him my aunt remembers cowering away, and thinking ‘Who is this man?’ as she was only a young baby when their Dad left she didn’t know him, which was tough on both of them.

It’s fair to say my Grandparents achieved their goals they moved the family over to the UK, both got jobs which enabled them to buy a larger house in Lewisham, their son joined the military and they went on to have another daughter. Grandad returned to Guyana in the 90’s to start a carpentry and joinery business and opened a workshop teaching youth in Guyana the trade, returning to London again permanently in the 2000s.

People all over the world recognise Windrush day because of the impact it had in fast tracking diversity in London, a period of time that ignited a change in the culture in Britain positively. 73 years on I feel grateful and proud of my Grandparents for the sacrifices they made to build this life for our family. Today I celebrate and recognise all they and others from the Windrush generation did. 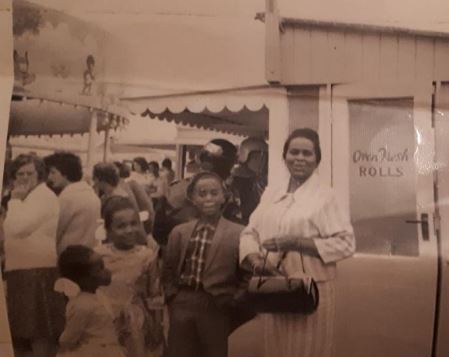 Russell Kennedy, Managing Director of Brit Property Insurance division, talks about encouraging communication between people at different levels of the organisation and how important it is that suppor...

Experiences of Ramadan, by Rashidat Ali from Brit

I am excited to be writing this short piece on what Ramadan means to me. It is not something that I often discuss with anyone outside my circle of family and friends. The holy month of Ramadan is the...

Tomica Dowden, Deputy Manager Corporate Services talks to us about the culture at Brit

This October for Black History Month, we spoke to Tomica Dowden, Deputy Manager Corporate Services at Brit Insurance about the work culture at Brit. Tell us a bit about your role at Brit? “I’m Tomic...