In support of UK Coaching Week, British Athletics have been in touch with the women who participated in the ‘Women on Track’ photographic exhibition in 2018 – showcasing female coaches – to find out how they’ve adapted and continued coaching during the pandemic, what support their athletes have received, and celebrating their #GreatCoaching. 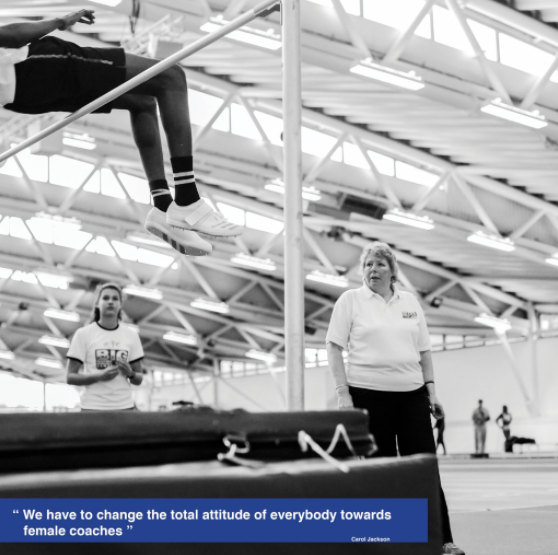 As Lockdown struck, as a squad of 16 athletes and 3 coaches, we were already in the conditioning phase of our preparations for the winter.  We already had a Facebook squad page to keep in touch and this proved invaluable in maintaining enthusiasm, sharing ideas and publishing training programmes.

I began to write a weekly adapted training programme published every Wednesday and we continued to follow our conditioning programme. There were very few changes / omissions made, just adaptations.  Runs were worked out between lamp-posts or football pitch lines instead of on a track, circuits used stairs in the house or brick walls in the garden, hurdles drills were over kitchen chairs or done virtually. Otherwise most of our usual programme could be done in the house, garden or park.

We arranged Zoom calls to do circuits together, we posed challenges which they solved brilliantly. High jump standing backs were done using music stands and a broom handle onto 3 bed mattresses piled on top of one another. They even challenged each other to reach the max target set by me for safety reasons. New drills were devised by all of us. New circuits developed to stop boredom and ease muscle fatigue.

This continued to the end of June with occasional rest periods being thrown into the mix to avoid injury and fatigue. Then as we began to look to competitions, I introduced high jump specific drills without a bed, in the garden or park – run up work, final stride drills, etc and the athletes were sent videos of these to remind them of good practice. They then sent me videos back for analysis.

Finally, in late July we got back to the track and I was astonished to see how well they were jumping and how they had come through the Covid period. Since then we have had 2 competitions and most have recorded a personal best or close to PB results.

I am so proud of how they have all coped with these strange times. Everyone followed the 3, 5 or 6 day programme, they all remained motivated for the next challenge and even when it seemed to be going on forever, they never flagged and continued to manage their injury risk extremely well.

What my athletes said; “Training has kept me sane when I could not do anything else”

“It has been great to train to balance the schoolwork”

“I am so glad you changed the circuit as my body was starting to complain!!” – one of the mums who was joining in all her daughters training sessions

I also coach the Cambridge University high jump squad and I have written similar programmes for them throughout the last five months. We met at least weekly onLine to do the circuit sessions.

I organised BIGish Jumps Fest at Lee Valley on the 22 August which was very successful with over 40 athletes competing in high jump, long jump and triple jump following very tight England Athletics guidelines.  And I have organised a BIGish High Jump Mini Series of two competitions at Chelmsford with over 80 athletes competing over the two days in mixed seeded competitions across all age groups and abilities.  At the first one on 13 September there was a World Masters V50 record set and 10 Personal bests achieved in what was probably the nicest atmosphere I have ever attended in the UK.

I believe this time has made my squad stronger, physically, as well as bonding us all together much more as a squad. And they are all now so motivated to move forward but as one said the other day “if we have to go back into lockdown again at least we know how to train on our own”

This summer has been a challenge but one which we have all risen to and one which has made us all better athletes and coaches.  And I am so proud of EVERY ONE of them.

I work within the Performance Operations Team as a Performance Programme Coordinator. My role is quite varied, as I work on the administration ahead of various athletics championships. This includes...

UK Athletics has published its Diversity Action Plan which sets out the organisation s approach and commitment to equality, diversity and inclusion. The plan, which will undertake progress reviews qua...

UK Athletics and British Athletics staff came together for International Women's Day 2021 and chose these 3 pledges to embed within their organisations, and to challenge any behaviours which would hi...