UK Athletics and the Home Countries joined forces to delivered the first ‘Raise the Bar’ conference in London on Wednesday for Transgender Awareness Week.

Transgender Awareness Week is typically observed in the second week in November and is a one-week celebration leading up to Transgender Day of Remembrance, which memorialises the victims of transphobic violence.

A five-person panel comprising of Joanne Lockwood (SEE Change Happen), David Brown (UKA Welfare Officer), Jacqui Gavin (Transgender Activist) and Katherine Conway (Head of Diversity & Inclusion, Aon) came together at the event in London last night to answer questions from organisations and members of the public around the issues trans people face both in business and sport, focusing on what work Athletics is doing on the subject to help raise awareness. 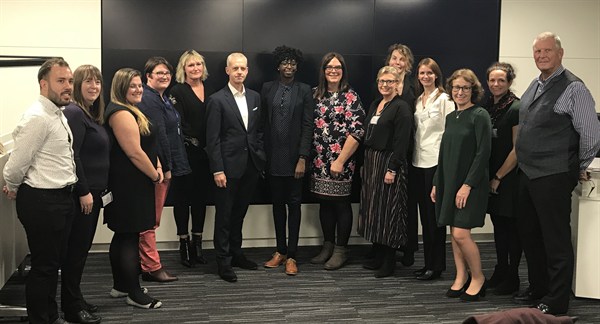 The event was chaired by UK Athletics’ Equality, Diversity & Inclusion Lead, Donna Fraser, who feels it is important that issues around the topic are acknowledged and opened out for discussion.

She said: “When such important awareness events such as Transgender Awareness Week occur, it’s important that we create platforms for open conversations around the topic.

“Joining forces with the home countries to deliver events such as this is a positive step forward in tackling transgender issues within our sport.  Collaboration is key and to have the support from UK Sport, Sport England and VERCIDA shows the commitment to making sport inclusive!

“I’m delighted that Athletics can be the first sport to help start the conversation around this topic to leverage other sports to do the same.”

It is not known how many trans people there are in the UK, but government figures estimate approximately 200,000 – 500,000 trans people are living in the UK currently.

The event was supported by Sport England and UK Sport, with the former’s Director of Sport, Phil Smith, overseeing the growth of the number of people actively engaging in sport, and feels that events like ‘Raise the Bar’ help to get the ball rolling on how to do that with under-represented groups.

He added: “Making sport accessible and available to those under-represented groups runs right through our strategy, and where that’s affected by gender-identity, as it is this evening, we are definitely interested.

“We’ve commissioned research around LGBTQ inclusion and we intend to release more into what is going on for this group of people in sport, during the upcoming Rainbow Laces campaign.

“We know that where life changes significantly, and there are few greater than changing gender, that is a vulnerable time in their life as far as sport and activity are concerned.

“Sport England have funded a range of transgender projects with trans-specific elements and we’ll be commissioning some further work in this area. Our interest is sport and we want to do what is best for those involved.

“I was delighted that we had such a fantastic panel lined up and that awareness is being raised around this topic.”

UK Athletics achieved the Disability Confident Leader level prior to the start of the World Para Athletics Championships London 2017 in recognition for work on disability for the championships and the...

Giuseppe Minetti has been competing as a sprinter since he was 10, winning his first race across the school playground as a trial on who would represent Sacred Heart in the Battersea Primary Schools A...