Transport for London (TfL) is celebrating Pride this year by revamping parts of the transport network with a new rainbow design, created especially to raise awareness and show support for the LGBT+ community, as part of a series of activities taking place this month.

As part of TfL’s biggest ever campaign for LGBT Pride, the transport network is applying the colourful designs to its bus stops and at major Tube stations. The bold new design highlighting #loveislove can be seen above the Oxford Street entrance of Tottenham Court Road station and has been integrated into several rainbow roundels at Tottenham Court Road, Oxford Circus and Piccadilly Circus Tube stations.

Fifty of London’s Santander bikes have been decorated with the same pattern for this year’s special anniversary event, which marks half a century since homosexuality was legalised in the UK. Anyone hiring a bike has the chance to ride one of the rainbow decorated cycles which show how proud the capital is of its diversity.

Pride organisers said they are more than every promoting a “message of hope, acceptance, activism and love,” while Sadiq Khan, Mayor of London, said: “Here in London, you're free to love whoever you want to love and be whoever you want to be. That's just one of the reasons why our city is seen as a beacon for the LGBT+ community and has such a vibrant, thriving scene - one that is bursting with colour, and contributes hugely to the life and soul of London.”

Ben Lyon, Chair of OUTbound, TfL's LGBT+ Staff Network Group, said: “We are delighted to be part of the Pride celebrations by decorating the transport network with our beautiful rainbow design at Tube stations, bus stops and on bikes. The capital is one of the most diverse cities in the world and we are extremely proud to be part of the message to the world that, whatever your sexual orientation, London is open and welcomes you.” 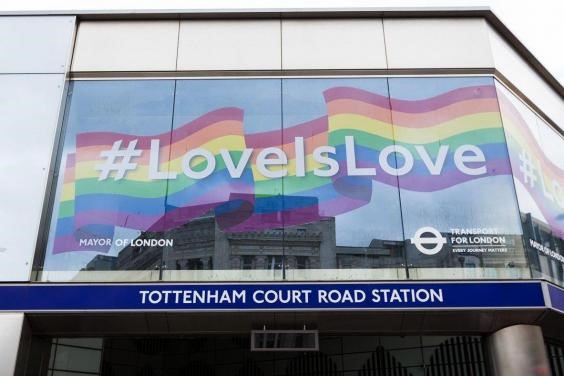 On the day of the parade, Saturday 8th July, TfL will mark the occasion with rainbow flags at several bus stops, including two in the Charing Cross area which will be kept permanently after the Pride celebrations to serve as a symbol of the organisation's support for the LGBT+ community.

Earlier this year in May, TfL’s rainbow bus celebrating London’s LGBT community toured the city ahead of Pride festival. With drag kings and queens on board, the bus stopped off at St Paul’s Cathedral, gay venue The Vauxhall Tavern and Buckingham Palace for a photo shoot, before making its way to Brighton.

This year's initiatives build on TfL's passionate history of supporting Pride following the installation of the diversity traffic signals last year and a range of rainbow-wrapped vehicles, including a London bus, black taxi and DLR train.

Fostering a diverse and inclusive workforce benefits our people and our company. We want every Arcadian to feel proud to be themselves at work. #ProudToBeMe is shorthand for our commitment to create a...

Marcia Ore is the Equality and Inclusion Partner for UK Atomic Energy Authority. A fairly new role within the organisation, Marcia has been there for eleven months and it is her job to improve diversi...

Why we're proud to change our logo for Pride

During Pride month, logos around the world change to stand in solidarity with the LGBTQ+ community. Our Pride logo and Wellcome staff at Pride in London in 2019. Logos are a mark of distinction th...

Jehmeil Lemonius is a grassroots player and captain of Stonewall FC and also works in our diversity and inclusion team. With Pride Month underway in June, he writes about what the movement means to hi...