Being a Coach with Leon Baptiste 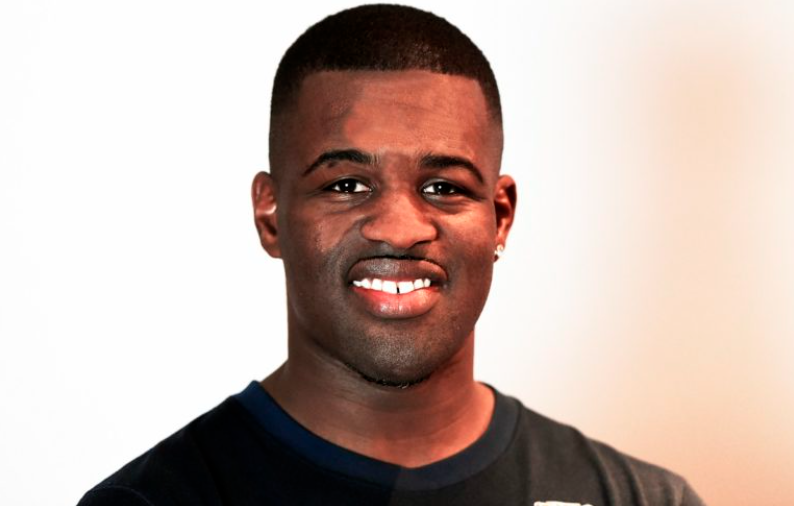 What is your athletics background?

As a child I was a mad-keen and a promising footballer. I was always either playing it or watching it. I soon realised that I was fast; a lot faster than the other kids.  Unfortunately, when I was 14 I had a nasty knee injury meaning I couldn’t kick a ball anymore ending all my dreams of becoming a footballer. My PE teacher at the time suggested I try athletics. I had watched the Olympic Games from Atlanta in 1996 and especially remember Michael Johnson so I thought I’d give track and field a go.

My mum took me down to my local track in White Hart Lane, Tottenham and I started training with the club there, Enfield and Haringey. I was soon training three times a week and really enjoying it. I realised that the more training I did the faster I could run!

Within three years I was competing for Great Britain Juniors and in 2003 I won double gold at the European Junior Championships (100m and 4 x 100m). I was wowed by it all – it was all so exciting. Soon after this I met with John Regis who had been one of my heroes in the sport and I signed with his agency and secured a kit sponsor, so things were all going well.

However, from 2003 until 2009 I did struggle with that jump up from junior to senior level and had a few injuries, so my confidence waned. But I persevered and in 2010 it all came together and I finally delivered at a senior level when I won 200m and 4 x 100m relay gold medals at the Commonwealth Games in Delhi. It was a surreal experience with it being live on BBC as well as thousands watching in the stadium.

How did you get into coaching?

After my success in Delhi my target was the London Olympics in 2012. I started training with Steve Fudge and was one of the more senior members of his group.  I was one of the oldest in the group so although I was training too without really realising it, I started helping him out at training and I found I was enjoying it. It just developed from there. After another injury and surgery on my knee, London became impossible for me, so I increased my focus on coaching and I officially started my own group and taking my coaching badges. I spoke with Nick Dakin who was at UKA, and he supported my progress.

I am now a level 2 sprints coach and since 2015 I have been the national relay junior coach based at Loughborough University. My group of 11 athletes includes para-athletes with an age range of 18 to 29 years.  My first five or so years I coached all able-bodied athletes. Then three years ago Sophie Hahn approached me and I was delighted to become her lead coach. I now also coach Zac Shaw.

What is your coaching philosophy?

I like to really focus on the individual’s needs and abilities. I have great attention to detail – I don’t believe in one-size-fits-all.  I want to give my absolute best to each athlete, so I keep my group relatively small. That way I can get the best out of each athlete.

At the start of the season, I will sit down with each athlete and talk with them about their goals. It has to be an honest conversation. It is important that these goals are realistic but challenging. This will be based on what they have done before, what potential I can see and where I can foresee them getting to in the next few months.  Sometimes I have to play ‘bad cop’ to ensure we come up with a sensible plan. We will discuss races/events to target and, again, I may have to suggest some paring back of races.

I treat the para-athletes no different although obviously there may be some adaptions needed in the training – be it a shorter stride length on one side if an athlete has cerebral palsy or using a brighter sign for an athlete with a sight impairment. The group is all very inclusive. They love helping and motivating each other which I encourage, and it makes my job easier.

For the Futures Programme I coach the relay squads and that takes careful planning – it isn’t just a case of putting four people together! We hold regional days, squad days and will practise throughout the year.

What motivates you as a coach?

I have a huge passion for the sport which is why I have stayed in it for 20+ years. I have watched it since I was 11. I love watching athletes do well. I believe in my athletes and really enjoy seeing them develop their talent. It gives me a huge buzz when they perform and I can see a lot of improvement especially when I know that has come from hard work and drive.

What is your most memorable moment(s) as a coach?

Firstly, Sophie Hahn in 2019 when she became double world champion and double world record holder at the World Para Athletics Championships in Dubai. This was a huge achievement for her and I was incredibly proud to have helped her. It had been our target for the whole year and with the Champs not taking place until November it had taken a lot of planning and patience to peak at the right time. I drew on my own experience from the Commonwealth Games in Delhi in 2010 as these took place in October. We put together a plan for the season and for it to come off completely was a joy to watch.

Secondly, Beth Dobbin becoming British Champion in 2018 when she ran 22:59 in the 200m showed me I really could develop someone who had shown some potential but who had no aspirations or expectation to be British Champion. I had coached Beth since 2012 so I was full of pride when she took the title. This year she also competed in her first Diamond League which was another milestone achievement for us both.

What are your coaching ambitions going forward?

I’d like to continue to be successful as a coach with new athletes and my existing group. Of course I would love to coach some more Olympians and Paralympians and see them win at major championships as that is always the target. But seeing progression, improvement to making finals is important and is part of the development of any athlete.

For the relay squads, I feel we have great talent and opportunity going forward. The juniors this year won gold in both the men’s and women’s sprint relays at the Europeans and some will be still eligible so that will give them valuable experience and a taste of championships as they target the much tougher World U20 Championships next year.

I would also like to see more female coaches coming through as that would be good for the sport and would encourage more female athletes to stay in athletics.

The Athletics Pride Network delivered a series of LGBT+ inclusion workshops at the UK School Games in Loughborough in September, and also to employees at UK Athletics and Home Country Athletics Fede...

Paula Dunn has been awarded the BT Sport Action Woman Lifetime Achievement Award on an evening which celebrated women’s sport in the UK during 2021. Dunn, the Para Athletics Head Coach at UK Athletic...