My experience shadowing the Minister for Implementation 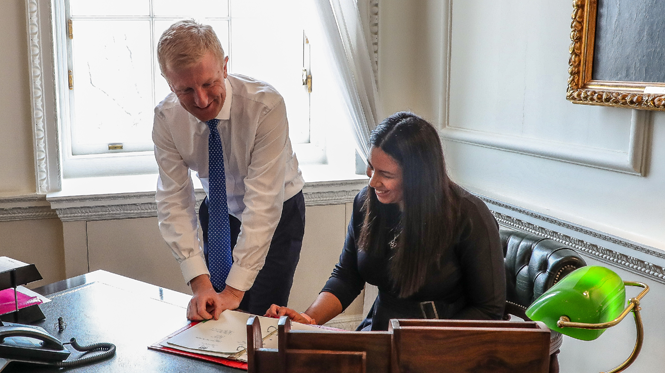 My name is Sommer Bristo and I am an apprentice working in the Elections Division as part of Constitution Group. As part of National Apprentice Week I was given the opportunity to shadow Oliver Dowden for a day, which gave me a wonderful insight into his role as Minister for Implementation and the tremendous work of the officials working in his Private Office.

At the start of the day, I was invited to meet with Oliver. He was pleasant and hospitable; we discussed the apprenticeship scheme, my journey to becoming an apprentice and the sorts of work that I have experienced as part of the apprenticeship programme. The Minister listened carefully and showed interest in the nature of the scheme.

Oliver then went on to explain his role as Minister for Implementation and the nature of his extensive portfolio. Before shadowing the Minister, I was aware of the wide range of matters for which he has the responsibility, however, I found it difficult to visualise what it would look like to manage these responsibilities and competing priorities on a daily basis. Throughout most of the day, the Minister had back-to-back meetings, most of which I was fortunate to be able to attend. From a meeting with the Implementation Unit to a meeting with the Geospatial Commission, updates on EU exit implementation and the on-going innovation work, I was able to see the ways in which the Minister oversaw and provided direction to the different work streams under his responsibility.

One of the last meetings that the Minister was scheduled to attend that day was in No.10 and he took the opportunity to give me a private tour of the prominent building. Throughout the tour, the Minister introduced me to various officials and No.10 staff, including the political advisers based in the building and officials in charge of putting together Prime Minister’s Questions briefings. This was a fascinating opportunity to experience the beating heart of Government life and a great chance to look around a building in which Oliver Dowden had spent many years as a Political Advisor and Deputy Chief of Staff to David Cameron.

Before shadowing the Minister, I had an understanding of the importance of the officials working in Private Offices and the work they do to support Ministers’ to fulfil their responsibilities. However, it is hard to fully appreciate the work of a private office without having lived a day in their shoes.

Throughout the day, it became clear how vital each of the officials in the Minister’s Private Office is to the successful management of his busy schedule and the competing priorities that he faces. Whether it be his Diary Manager, Catie, keeping the Minister on schedule for each of his appointments and ensuring meetings are rescheduled when changes arise, or his Private Secretaries Alex, Mark and Holly keeping on track of the various policy areas that they cover, actions to be taken and bridging the gap between policy leads and the Minister; the jobs that they do are invaluable to the smooth running of the office.

Having the opportunity to shadow the Minister for Implementation for the day was an amazing experience, one that has made a lasting impression. The Minister was friendly, open and hospitable. Similarly, his Private Office officials were generous with their time and ensured that the day was a useful and productive one. One thing that I have gained from this experience is deeper appreciation of the hard work and dedication that it takes to be a Minister and to be part of a Ministerial Private Office.

Sommer was chosen to shadow the Minister because of her hard-work and dedication to the apprenticeship scheme as well as her passion for the Civil Service and in particular the impact it has on individuals’ lives. Sommer has always been keen to expand her knowledge of government and develop herself. She always wears the ‘apprentice badge’ with pride.