How HarperCollins is setting the Diversity standard within publishing

On 6th July, we were invited to attend a meeting of the HarperCollins Diversity Forum and uncover the fantastic work it is doing for diversity and inclusion in the organisation.

What was truly fantastic to hear was how their commitment to diversifying the publishing industry filters down through all departments and levels, highlighting the importance, not only of senior backing and the commitment of HR teams, but the culture of an entire organisation based around acceptance. The group has grown from only ten members to 61 in recent years and brings diversity to the forefront through their internal intranet and general messaging.

We were introduced to the work HarperCollins is doing with the winning presentation they submitted to Business in the Community for the Employer Network Award. The presentation explained why diversity is important for the organisation as they uncovered that only 4% of their editorial team were from the black, Asian or minority ethnic demographic, which was not very representative of the 29% in London.

The move towards more reflective cover jackets for novels set in countries outside the EU was also discussed. A study was conducted into book jackets from authors from ethnic minorities or books set in a country outside of Europe, such as Africa or the Middle East. When put side-to-side the jackets all featured similar images that often did not reflect the content of the novels. HarperCollins has worked within its departments to create cover jackets that reflect the content not the nationality of the author or where the story is set. 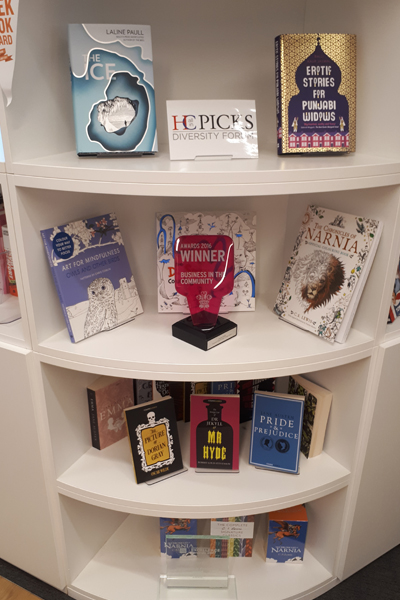 The forum has also worked hard to make the company more accessible to authors from minority groups, though it was agreed that more needed to be done. One project is to make the images in its Collins Learning text books reflective of the ethnic diversity of our country, working hard with one of their image libraries, they encouraged the depiction of a diverse range of people and characters within educational resources and picture books. This also meant liaising with educational book authors to encourage the diversification of their character’s names and nationalities.

The group has also encouraged the display of books from authors from ethnic minority backgrounds in its reception area displays, regularly offering free copies to staff to increase readership and awareness.

HarperCollins’ Diversity Forum also supports the community and encourages new talent from demographics who may not traditionally see publishing as a career option. It has partnered with City Gateway to deliver advice and support for people from less-advantaged communities. Employees from HarperCollins deliver workshops on workplace etiquette and interview skills to help these young people in their careers, whether with HarperCollins or another organisation. They have previously partnered with Creative Skillset, another programme aimed at delivering career advice and training to young people, but have recently set up their own internal scheme.

In praise of the work that the Diversity Forum has done, Head of People, John Athanasiou commented, “The cultural shift [at HarperCollins] has been massive in recent years and this group has really made that change.”

A diverse and inclusive working environment is an important part of the culture at HarperCollins, which is something that we at Vercida hope to encourage more of and to showcase publicly through company profiles and articles.

We were honoured to be invited to HarperCollins Diversity Forum and to share what we do and hear of the fantastic work the forum is doing to encourage a culture of inclusion and acceptance.

Don’t forget to apply to their BAME Traineeship here!