On Tuesday 9th May, 2017, HarperCollins hosted an event to discuss the importance of Staff Network Groups and celebrate the first ever National Day for Staff Networks, which was commemorated on 10th May, 2017.

National Day for Staff Networks was born of a seed planted by Cherron Inko-Tariah and, with the help and support of lots of other influential figures, she has made it a huge success with the first ever day being celebrated across the country. The day aims to highlight the importance of staff network groups within organisations for driving success and supporting employees. The theme of the day was Celebrate, Inspire and Transform, which was reflected throughout the event.

As host, the event was launched by HarperCollins’ UK CEO, Charlie Redmayne who sent a message of belief in his own organisation, commenting that he is “incredibly proud of the work that we do in our business” and how they are striving to be the “broadest and best publishing company we can be”. This highlighted the reason for such an event: to encourage and inspire individuals and groups to create successful Staff Network Groups by exploring the benefits to a company and to its individuals. 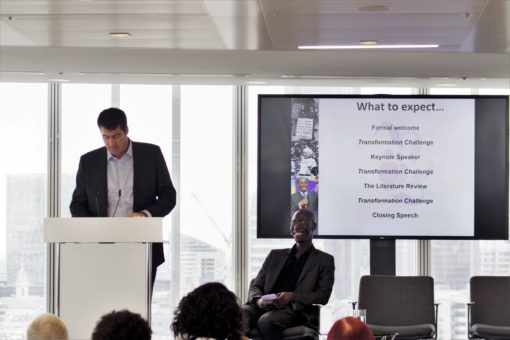 The compere, Rasheed Ogunlaru moved swiftly on to the first of three Transformation challenges, which took the format of discussions within our tables, which was then fed back to the room. The aim of our first discussion was to talk about how we were celebrating National Day for Staff Networks. When opened up to the room, we heard how the London Fire Brigade are making strides in their diversity with the creation of their first ever Inclusion Policy, Inclusion Board and Equality Support Groups thanks to the enthusiasm of their first female commissioner.

Shabir Abdul from Camden and Islington NHS Trust commented that this year’s celebratory day had come too soon for the Trust but they were gathering ideas from the event to celebrate next year as well as taking part in Equality, Diversity and Human Rights Week, which takes place from next Monday. 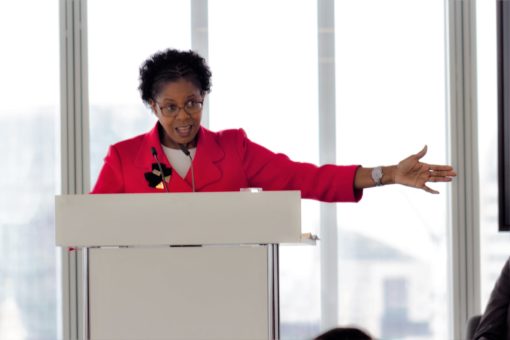 Joan Saddler, Associate Director, NHS Confederation, was then introduced to the stage for an inspiring speech about what the purpose of a Staff Network Group is and who it is for. Saddler spoke on the importance of aligning your staff network goals with the overarching beliefs and targets of the business to add value to the networks and encourage further investment from the top.

She explored the different kinds of networks which exist, such as Security Networks based on science and tools, Monitoring Networks like Facebook, Enterprise Networks which connect employees together through an intranet or platform, and finally a Network of Interest. Network of Interests are our staff network groups, which are set up by an organisation to encourage employees to innovate within networks of individuals who share their interests.

These networks are not just about the people within them, they are about directing change within the business, sharing ideas and struggles, whilst also aligning with the direction the business is hoping to go. It is, therefore, vital for networks to work with the business as a whole.

However, it is also equally important for businesses to support the work of their networks such as rewarding the efforts of leaders, who often take time out of their own day to manage the networks. It’s all about building empowered relationships within your networks, understanding the people you are doing it for, and how this aligns to the overall business.

Saddler advised that to be a successful Staff Network Group Leader, you have to care, you must “be your authentic self and lead with passion” as everyone knows when you do not care, because ultimately the network is all about us. Her parting comments were “be inspiring, be empowered and continue to be your best”.

The discussion which followed highlighted the importance of senior backing and the difficulties networks, especially in the public sector, seem to face in receiving this support.

Rob Neil expressed that “Staff networks are business critical” and that this needs to be recognised at all levels within an organisation.

He commented that this is “particularly important in the public sector because we serve the public. So, if we cannot reflect the outside public then we are failing”.

HarperCollins’ John Athanasiou chipped in that networks have “got to link to strategy – surely that will make the network more important. Why wouldn’t we give time to our staff to create staff network groups because it’s so important for the business as a whole?”.

This was a thought reflected in the rest of the room, including by Jerome Williams from Homes and Communities Agency. However, Williams revealed how it was often a question of being allowed to start a network. At the start of his journey at the agency, there was one staff network group. He sent out an email asking if anyone would be interested in setting up other networks to fantastic response. It would seem people just needed to be given permission to start a group.

Such comments highlight the importance of senior backing, and even permission, in order to create staff network group success.

Learn a little bit from data 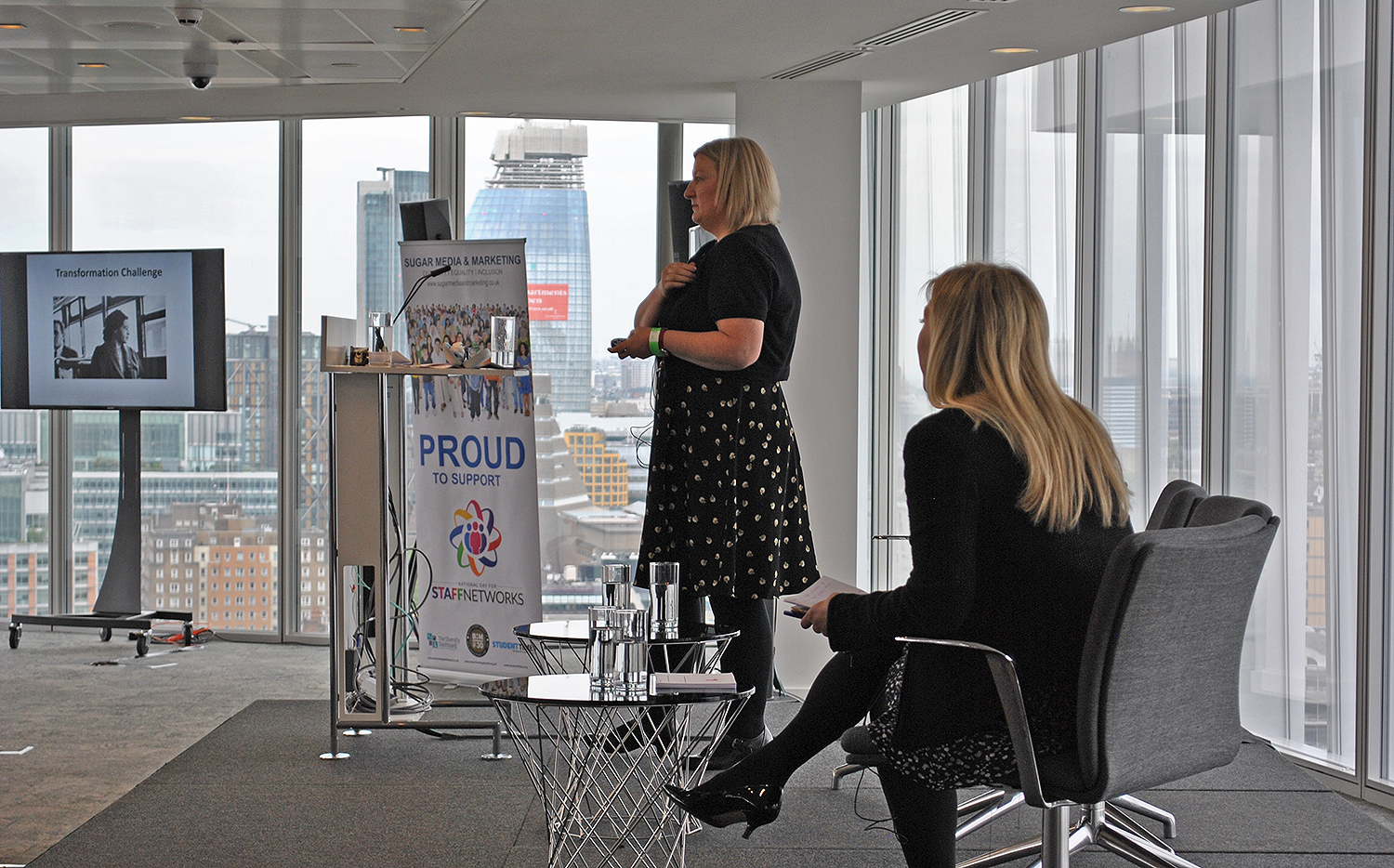 The next part of the day addressed the statistical evidence that Staff Network Groups are beneficial. Jo Yorker and Nina Williams, Affinity Health at Work, carried out a report into staff networks looking at both academic resources and practitioner research.

It was uncovered that, despite the prevalence of staff network groups, there is very little academic research into their effectiveness. From all of the research they conducted, it was discovered that the benefits included,

However, the figures for return on investment were not uncovered despite their being compelling evidence that diversity contributes vastly to the UK economy.

Nevertheless, what was interesting was the discovery of Informal Staff Networks, which are the networks we form at work with colleagues. These informal networks help us to form friendships with people at work with whom you can talk to about work and career whilst also enjoying a friendship outside. This opens doors to new opportunities to gain help with our work and progress our careers by creating powerful connections.

It has, however, been revealed that we tend to make friends with people like us, which means that creating this form of network becomes difficult when you are a minority. This is where the importance of organised staff network groups can step in, by creating a network with shared values you are opening the doors to those who may have been marginalised from these traditional informal networks. It is also key to look at how these informal networks work in order to advise the organised staff network groups.

Jo Yorker expressed the need to research the topic of staff network groups in more detail and ask the right questions. It was, therefore, opened up for discussion which resulted in some passionate beliefs from our table.

The general opinion from the room was that research would need to be conducted sensitively and express the benefits of staff networks rather than focusing on its failings. Rob Neil commented that it would be “unfair” to judge a network against ROIs and business goals without giving that network the support and financial backing required to make it a success. It was agreed that key criteria must be set out before research was conducted and it should be constructive rather than detrimental. It was also highlighted that the results of such research should be made available to everyone, as so much data has previously been collected but not shared.

“They who water will always be watered” 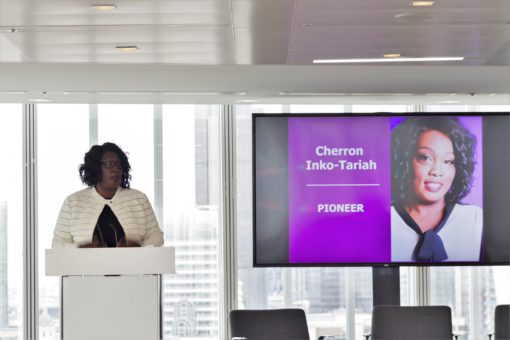 It was then time for the main event, a talk by Cherron Inko-Tariah who made this all possible. She began her speech with thanks and her reasons for planting the seed that grew into National Day for Staff Networks.

Inko-Tariah stated her belief that, “if diversity is the breeding ground for innovation, so I say that networks are the incubators,” which deserve to be celebrated.

Diversity is a social movement of change that will only be spread by the great work of networks within organisations making things happen. It takes just one person or group of people to start that change, yet it is the responsibility of everyone to carry that thought forward. The national day gives an opportunity for individuals and groups across the UK to express that the status quo must be challenged. Inko-Tariah said that this is particularly important right now in the current UK climate, so the day could not come at a better time.

She strongly expressed that there are “no hidden figures anymore […] we are all here to be seen and heard” and that people power must prevail as we are not there yet with diversity and we “need to be more aware, more vigilant and decide what we will do to change the conversation.”

Inko-Tariah has set up the Power Hub, which is a series of affordable events where everyone can learn about diversity and inclusion. She is also working on a Network Twinning Programme where networks can partner to learn and share best practises.

Rounding up the event, she expressed how she has been “blown away” by the support shown to her for the creation of National Day for Staff Networks and how many companies have signed a pledge in support of staff networks, including Ofcom, Department for Transport and UWE Bristol.

She concluded, “Tomorrow is possible because of you and for people like you […] as you have watered, let you be watered”.

Diversityjobs would like to express our gratitude to HarperCollins and Cherron Inko-Tariah for inviting us to attend this very insightful morning.

Images curtesy of the Power of Staff Networks.

Colt and VERCIDA: Embedding Inclusion and Diversity into everything we do

At Colt, connectivity is at the heart of everything we do; from the way we work with each other, build our strategic alliances and enable our customers with our leading products and services.​ Why? Be...

I am the Development Administrator, supporting the various development teams including Coach Education, Facilities, and Officials with administrative tasks. This role involves a lot of multi-tasking,...