Schoolchildren have created a new book which it’s hoped will empower female BAME pupils thanks to a collaborative project with Leeds Beckett University. 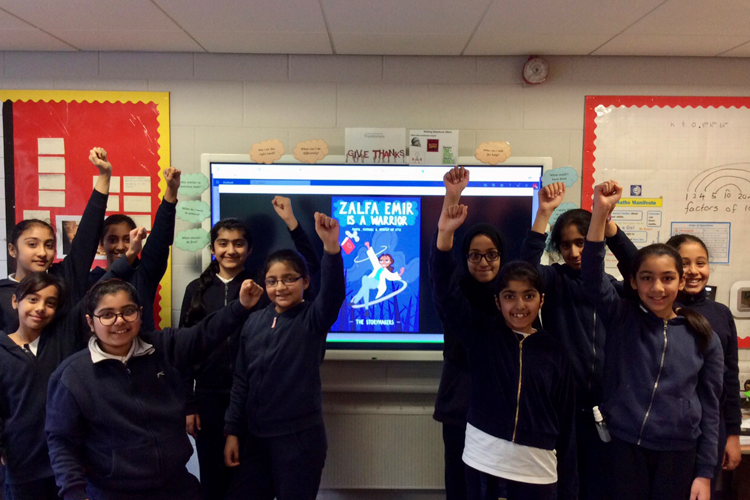 Zalfa Emir is a Warrior is a novel about a strong female character single-handedly defeating evil forces through sheer determination - and a little bit of magic.

The Story Makers Press, based within the Carnegie School of Education at LBU, played a key role in helping pupils shape the characters and bring their story to life.

The aim of the project was to increase confidence in female BAME pupils at Bradford-based Girlington Primary School by co-creating a story they could relate to.

Undergraduate students from the Story Makers Press team worked closely with Year 5 pupils to create the new book which will be the subject of a virtual launch on 23 May.

A lack of representative narratives in children’s fiction has been recently evidenced by the Reflecting Realities report, which states that only 4% of children’s books published in 2018 included a BAME protagonist.

The Story Makers Press hope by publishing underrepresented narratives, it will make sure that every child can see themselves in the books they read.

Lisa, who is also MA Drama & Creative Writing in Education Course Leader at LBU, said: “The main aim of the project was to raise confidence in the girls by co-creating a story with them which had characters that they could relate to.

“We wanted to create a story with the girls in which the main protagonist was aspirational, with a strong sense belief in herself.

“All children need to see themselves in the stories that they read, it makes them feel valued. There is a lack of stories which represent all children.”

Following the success of their first published book, The Nightmare Catcher, the Story Makers Press were on the lookout for a new group of Story Makers and were last year contacted by Girlington Primary School.

It was the perfect opportunity for the Story Makers Press to retell a South Asian folktale by working with pupils across eight world and story building sessions.

Interestingly, the female school pupils chose a mixture of comedy and horror as a genre for their story.

Illustrations for the book were completed by Leanne Bell while another LBU student, Serina Kulemeka, created a dynamic design to help to bring the story to life.

Lead author, Juwairiyaah Ali, who is also a student at the University, helped to shape Zalfa’s strong character and story.

She said: “I am proud to have been given this opportunity to write for Story Makers. It’s been a brilliant journey.

“The girls of Girlington had this vibrant energy and imagination which I loved and really wanted to capture in the story.

“Girls of Girlington – you are the warriors. And you’re definitely not little.”

Members of the Story Makers Press reported that many of the female pupils stated that they felt more confident about their ideas during the making of the story.

Muniba, a pupil from Girlington Primary School, said: “I think it’s about no right and no wrong, In Story Makers you can do whatever you want, it’s a story you can make.

“If you think of an idea you can just say it out loud, you don’t think that this isn’t a good idea. In class you have to stick to the theme that you’re doing, but in our Story Makers we do whatever idea we like.

“It’s also really fun, because you get to express your feelings and not everybody gets to have a chance to do this.”

The book is accompanied by an Explorer’s Guide which helps teachers explore key moments in the narrative safely and creatively with children.

The Story Makers Press is part of the Story Makers Company, which was set up in 2017 at the Carnegie School of Education, alongside teachers and artists.

Further announcements in the lead up to the virtual launch will be made on the Story Makers Company website, visit www.storymakersco.com/.

Did you know in the UK we’ve invested £9million in over 6,000 good causes through our Aviva Community Fund. On Global Recycling Day we are spotlighting one of the brilliant organisations that we’ve...

We are delighted to have scooped an award which demonstrates our commitment to sustainability and protecting our environment. We have been named Green Business of the Year at the Business Leaders Awa...

It’s officially iced coffee season, and this year, Starbucks is bringing some much-needed colour to summer with the arrival of the new, colour-changing Confetti cup. Combining all the matte magic of...

For the sixth year in a row, Capgemini UK has been recognised for their excellent work on gender equality and inclusion   Run by the charity Business in the Community The Prince’s Responsible...