Attended by 100 employees, international guest speakers shared their mental health experiences, speaking out against the social stigma and discrimination which some people experience around mental health illness.

“Stephen Lewis, Ability Group member and Time to Change Wales (TTCW) champion opened the event, welcoming attendees and guest speakers before touching on his mental health journey. Louise White, Director of HRED, explained that the event was an opportunity to talk openly about mental health.

The event was kick started by the host Welsh sports commentator, Phil Steele, giving an honest and at times humorous commentary about his career and mental health journey.

Next up was Andrew Cotton, a professional big wave surfer who shared his career journey.  After training as a plumber, Andrew changed direction and became a professional surfer in 2013. But disaster struck last year - he suffered an accident on the coast of Portugal and a suffered fractured back which prevented him from doing what he loves most, surfing. During his recovery period, he reminded himself of his ‘healing back’ rather than his ‘broken back’, echoing the sentiment you’re not ‘broken’ just because you have a mental illness.

Becky Oatley, International Netball Player, and TTCW Champion, shared her experience of discrimination within her netball career. Becky was devastated when she received a text from her coach saying she was not welcome to pre-season due to her, “Ongoing mental health condition”.

Becky went on to gain an international contract with Severn Stars, where she was welcomed with open arms by staff and players alike. Becky said, “I was overjoyed to step on the court with my new Stars family and prove to myself that mental illness cannot stop me chasing my dreams”. 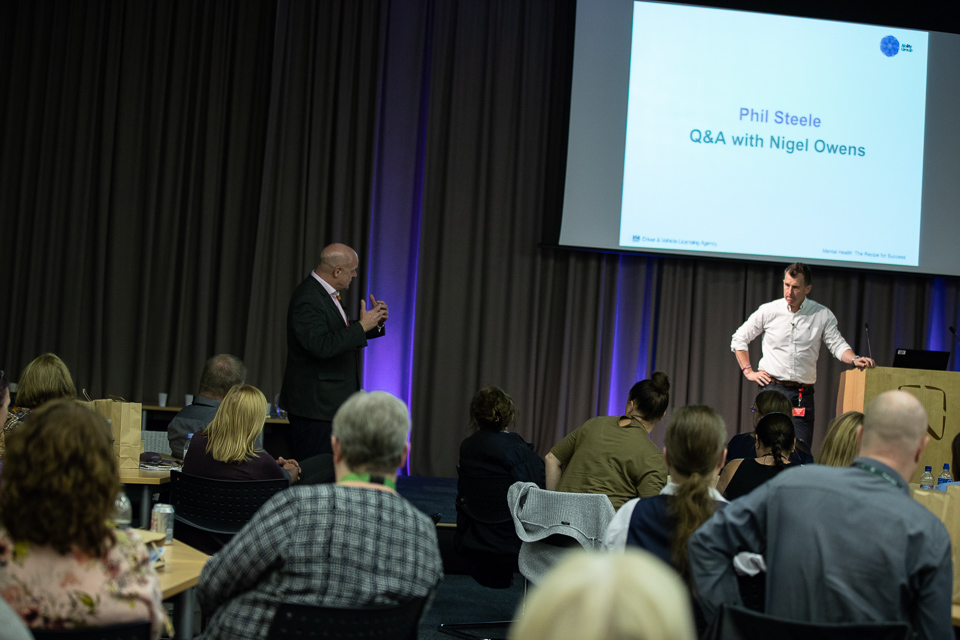 Last, but certainly not least Nigel Owens, international Welsh rugby union referee, shared his story. He spoke intimately about the issues he’d experienced throughout his life including being bullied at a young age, coming to terms with his sexuality, his suicide attempt and consequent eating disorders. Nigel’s story-telling captured the minds and the hearts of the audience, with many people in the room becoming emotional during his talk.

One employee that attended the event commented, “The guest speakers were honest and open. It showed me although at times I feel isolated and alone questioning everything, I’m not the only one to feel this way and it gives me hope for managing my life without limitation going forward.”

The event finale, a Q&A session with the guest speakers, was also really beneficial for everyone.

The host Phil, added, “It was a thoroughly enjoyable occasion - at times very moving, humorous and informative, but never less than uplifting. The warmth of the audience and their willingness to share their own stories and experiences was also hugely rewarding and heart-warming. It’s great to know that DVLA is putting so much store in supporting the mental health of its employees an you should be justly proud of this.”

World Mental Health Day: why you should always ask twice

This article is written by Mel Collins, Deputy Director of HR Delivery and Strategic Partnering, and a Mental Health Champion at DCMS. In October 2020, DCMS held a mental health awareness week. The t...