Are the BAFTAs Tackling Diversity Effectively?

After last year’s #OscarsSoWhite debate, which highlighted the lack of racial diversity in the 2016 Oscar Nominations list, award shows such as the BAFTAs have been consciously endeavouring to diversify their nominee lists.

In recent months BAFTA has modified its eligibility criteria and established initiatives to endorse diversity. It is moving forward and making strides in this area as the composition of the nominees are more diverse than in previous years.

However, the BAFTAs 2017 have not been without controversy. According to the Hollywood Reporter The BAFTAS 2017 nominee list was ‘a race related problem.’ A columnist for the website had remarked “that’s because two top-tier Oscar contenders, who happen to be American-born people of colour, weren’t nominated in categories they might win at the Oscars: Moonlight’s Barry Jenkins in the Best Director race and Fences’ Denzel Washington in the Best Actor race.” A six-time Oscar nominee and two-time winner, Washington has never been nominated for a BAFTA. This resulted in the #BaftasSoWhite trend on twitter; following last year’s #OscarsSoWhite trend. Nonetheless, the BAFTAs award night did to its own bit to alleviate the racist tag it had attained.

The former Skins and Slumdog Millionaire actor Dev Patel won Best Supporting Actor for his portrayal of a young man’s search for his real mother in Lion, beating favourite Mahershala Ali (Moonlight) and Ryan Gosling (La La Land.) He was clearly moved: “Wow! That just happened,” he said, “words, words, words. I sit at home and watch this with my family; it is such an overwhelming feeling.” Patel is the first actor of Indian origin to win a BAFTA for his role. He commended the film's directors and producers for helping "to get this Indian dude... with wonky teeth and floppy hair to work in this industry". He spoke earlier in the evening about diversity: "I think diversity in British cinema is moving in a very positive direction and even looking at this carpet and all the different faces, it says it all." 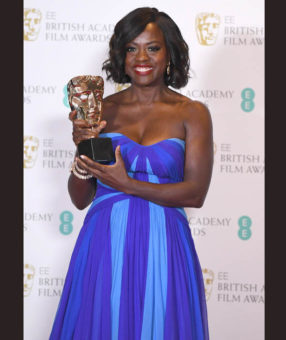 Viola Davis had been tipped to win Best Supporting Actress and she did so for her performance in Fences. An emotional Davis used the press conference after her BAFTA win to warn that this year may be a one off: “I believe what still is a deficiency is that we have one year a plethora of African American movies and then the next year nothing.” Regarding predictions for next year’s awards Davis said: “Very few African American names are in there.” Davis warned that prospects for her daughter who is five years old might be worse than for her own generation. She said: “She has to understand that she’s gotta be the change she wants to be. She can’t assume people’s minds have been woken up - we see that in the political climate now. We have to be the instrument of change now.”

While the Best Supporting Actor and Actress wins may have been won by people of colour, the visible surprise on the night was the lack of recognition for Moonlight, the ground-breaking US drama about a black, gay child growing up in Miami. The film received rave reviews from critics and was nominated for four awards, including Best Film and Best Original Screenplay.

A revamp in BAFTA voting, intended to increase diversity, does not come into effect until 2019. However, BAFTA said of the 375 new members accepted in 2016; 43% are female and 18% describe themselves as minority ethnic. The most significant change outlined is in the eligibility criteria for two of its award categories: Outstanding British film and Outstanding Debut by a British Actor. BAFTA has now introduced a condition that, from 2019, films put forward must conform to the BFI’s Diversity Standards, aimed to increase participation and representation of minorities and socially disadvantaged in British film. Additionally BAFTA announced changes to its membership process in the hope that increasing diversity in its membership will have a knock-on effect on its high-profile awards programme. Amanda Berry, BAFTA chief executive said: “Progress has been made on diversity but we still have work to do. We have more diversity across the acting categories and also in the subject matter of films. It’s not just about ethnicity.”

A number of people highlighted that the Best Actress and Best Actor categories were made up entirely of white stars to which Barry responded: “Everyone looks for the snubs and I want to remind people about the strong films. Let’s not overshadow their achievements because they are exceptional.”

Several weeks ago I was browsing the depths of the internet to find my next contract. For the last several years I had split my time between being a freelance web developer and a digital strategist f...

dunnhumby recognised as Top Employer for UK and US 2022

dunnhumby has been recognised by Top Employers Institute as a Top Employer for U.K. and U.S. for the second year in a row! We're extremely proud of this achievement and certification.This certificatio...

Working Families mission is to remove the barriers that people with caring responsibilities face in the workplace. As part of that mission, we work with employers (including ABI members) to suppo...

Brands and Agencies aim to gain a diverse audience