Black, Asian and Minority Ethnic at The FA

May 2019 saw the launch of the second phase of our ‘Bringing Opportunities to Communities’ strategy to help increase the representation of Asian communities across English football. The initiative is an important part of our ‘In Pursuit of Progress’ plan, to ensure the diversity of those leading and governing football better reflects what we see on the pitch in the modern game. A key strand of the campaign focusses on the importance of role models and to raise awareness of the Asian ‘success stories’ in English football. One of those is Riteesh Mishra, who tells his own story…

Riteesh Mishra is head coach of Charlton Athletic Women's first team and one of our Asian role models. 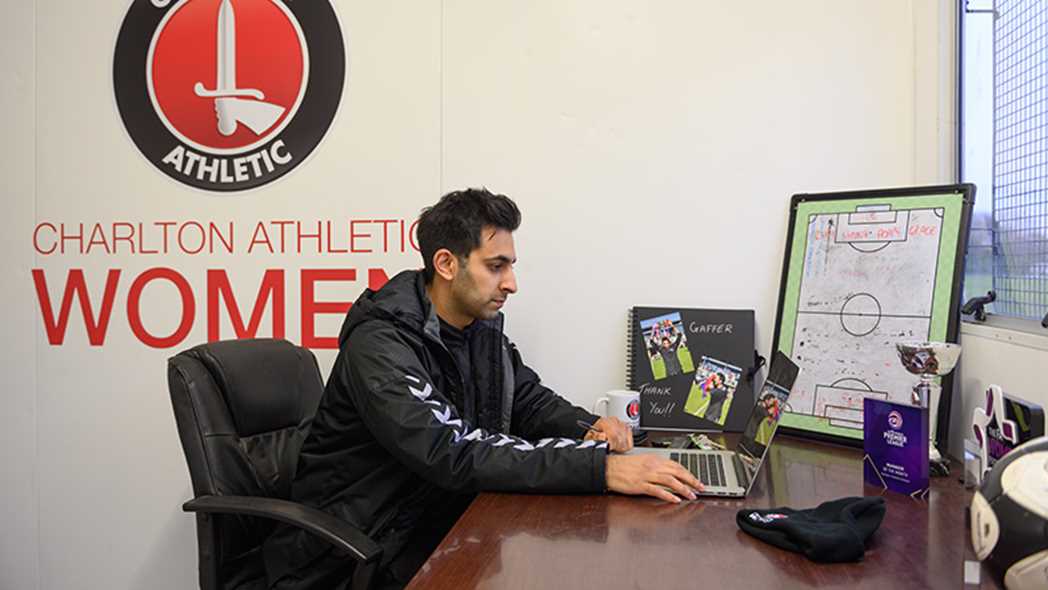 It was very humbling to be asked to get involved in this and it kind of puts things into perspective for me.

I never really saw myself as a role model, so it’s been a point of reflection for me, in terms of how far I’ve come quite quickly.

It’s also been a bit of a lightbulb moment for me in that even if I don’t see myself as a role model, I’ve got a duty to make sure that people have got somebody they can perhaps connect with.

That’s not just people from a British Indian or South Asian background like me, that’s anybody. I’d generally like to be a role model for my coaching ability and not just because of where I’ve come from, my cultural or racial background.

I grew up in Nottingham, in a big household of 15, which was pretty male-dominant at home with my father, his brothers and my granddad. They were all sports-mad, not just football, so as soon as I remember, I was always involved in watching and playing sport.

My dad used to play in the top Nottingham amateur leagues at weekends and I’d always go and watch and often be the mascot and as soon as I went to school, I joined a team pretty quickly and my parents were always keen for me to get involved in team sports. I'm grateful for that, because being involved in sport both recreationally and competitively, has taught me a lot growing up. 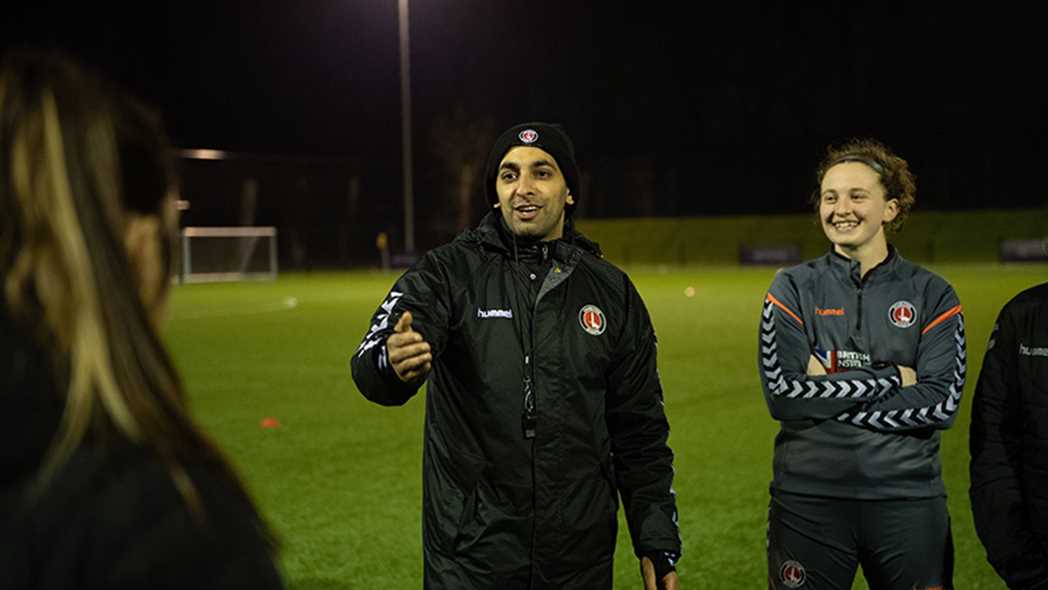 And we just used to play out all the time, any sport really, and I had very active friends so it was just normal to be involved.

As I got older, I realised I was pretty good at football and it took off from there. I joined Notts County’s centre of excellence when I was 11 and at that point, I just loved playing but when I joined the club, it felt really professional and I lost the enjoyment factor a little bit. Looking back, I wasn't ready to go in to a professional set up as I felt the creativity and thrill was taken away.

So I went back into local football and it wasn’t until I joined Nottingham Forest when I was 14 that I felt like I was ready to take the sport more seriously. It was at that point, I could see that I wanted this to be a career and I felt prepared to do that.

Looking back, when people ask, I never felt like being Asian held me back. With Forest, I was given great opportunity and I played up an age group for most of my time there, I was captain for the U16s and I played for the youth team.

So I don’t think my opportunities were hampered because of being Asian, but I think there were always some stereotypes that followed me around. I would get comments from opposition players, parents and sometimes staff, but I always felt the backing of my club. 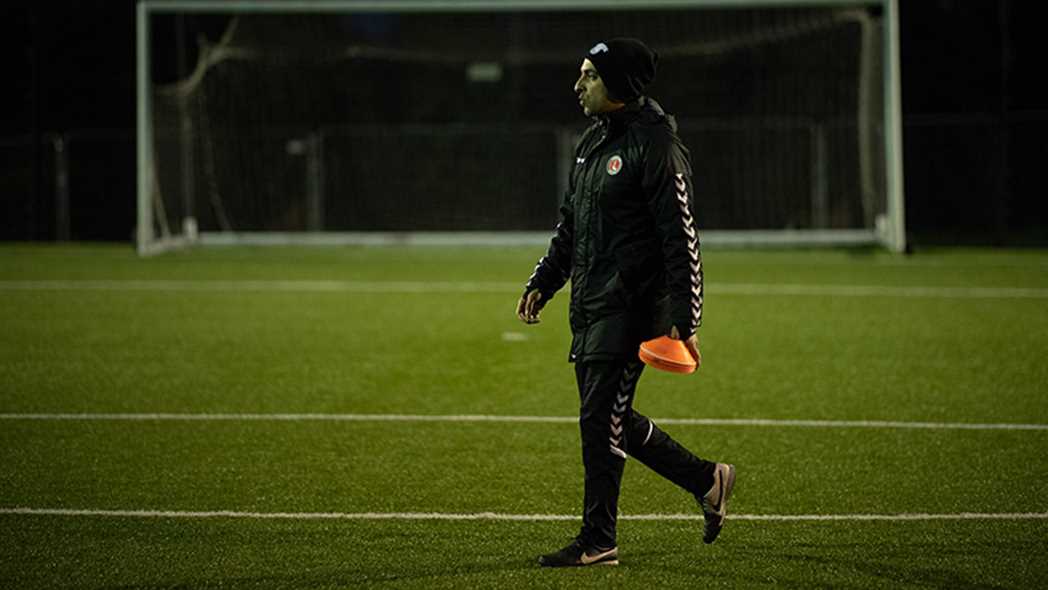 Looking back now, I do think there may have been some unconscious prejudice in some decision making as I developed through the age groups, and I would sometimes feel isolated, particularly when I went full time with the club. But I never thought these impacted my development.

When I was playing, I never thought I’d go into coaching. That all changed when I sustained a double leg fracture with Forest at the age of 19.

It was a massive blow at the time, as I was trying so hard to make it as a professional, but I then started to take a real interest in the training.

I was somebody who was always asking questions to the coaching staff and showed an interest in what they were doing anyway, but when I was injured I had a 12-month period where I was able to sit and observe a bit more.

That was when I started to really enjoy the tactical element of training sessions, just from watching it. It gave me a new perspective and as I watched matches as an injured player, I saw a different point of view and that’s when I first started to think about coaching.

When I was going through my rehab, I did a lot of reading and I went through my level one and two badges and that’s when I started to get the bug.

I left Nottingham and professional football due to the injury, and went on to university in Scotland and I still never really wanted to go away from the game, so I kept working towards my badges and got my B Licence as quickly as I could.

I did some volunteer work for clubs such as Falkirk and with the SFA, and through my old academy director at Forest, I was put in touch with various academy directors in Holland, Portugal and Spain. I went out and visited clubs for a week or so over the summer to observe and build a bit of my own coaching philosophy.

When I moved down to London in 2013, I wanted to get involved with academy football at that point and I approached all of the London clubs and volunteered at a few of them.

But it was when I was volunteering with Charlton's academy that they had an opportunity in the women’s set-up to firstly work with their U16s, and then manage their reserve team. That was the first time I considered women’s football, but it was a great opportunity and since then, I’ve developed fairly quickly into my current role as head coach of the first team.

I do believe it's been down to hard work meeting opportunity to reach the point I am at right now, and I know not everybody will have the opportunities that I’ve had, but it’s only been in the last year or two that coaching is something for which I’ve been rewarded for financially.

People will often overlook the time and voluntary hours required to build up your experience and CV, and I do think people expect things before they prove themselves. So I would like to think I have worked my time to get to where I am and have proven my capabilities.

But having gone through a long period of volunteering and taking the time to get experience, it’s still not a full-time career for me. I’ve always done it purely because I want to be involved in the game and get better, but it's only one part of my life, and I enjoy having multiple purposes.

I feel that I can be really proud and at the same time, it’s given me inspiration that people from a similar background who want to get involved in playing or coaching don’t see things as barriers but see them as challenges. And I want to help in any way I can, to give people opportunities.

Articles in Black, Asian and Minority Ethnic at The FA

One year on, Edleen John reflects on the impact of the murder of George Floyd

FA CEO has outlined the details of the new strategy to cover 2020 to 2024 We are proud to launch Time for Change, the FA&rsquo;s new strategy for the...

Both Nikita Parris and Kerry Davis opened up on their lives and careers on the pitch In the latest edition of our Black, England and Proud series, we...

Former Birmingham City and Derby County captain Michael Johnson has been working on the coaching staff of the England MU21s this season as part of the...

The FA were honoured to be in attendance at the United Nations' Global Refugee Forum in Geneva this week, as we kick-off a three-year plan to make f...

The FA’s ‘Bringing Opportunities to Communities’

The FA&rsquo;s &lsquo;Bringing Opportunities to Communities&rsquo; strategy focuses on encouraging people from Asian communities to get involved in fo...

Supporting Black, Asian and Minority Ethnic at The FA