In a recent interview as part of Bryony Gordon’s new podcast “Mad World”, Prince Harry spoke out about his struggle with mental health after the loss of his mother, Princess Diana, when he was just 12.

The Prince discussed how he had supressed his emotions for the majority of his life, at one point taking up boxing to help cope with his feelings of aggression before finally seeking counselling.

He describes it as “twenty years of not thinking about it, and then 2 years of total chaos” after he realised that this was something he really ought to come to terms with and the support of his brother.

“I, through a lot of my twenties, was a problem and I didn’t know how to deal with it,” he said. “I was a typical 20, 25, 28 year-old running around going ‘life is great’, or ‘life is fine’ … and then started to have a few conversations and actually all of a sudden all of this grief that I have never processed started to come to the forefront and I was like, there is actually a lot of stuff here that I need to deal with.”

The interview also discussed the Prince and the Duke and Duchess of Cambridge’s most recent campaign Heads Together. The campaign, which was launched last May, pulls together the aims of a number of mental health charities to tackle the stigma around speaking out – especially for men. In speaking so candidly about his effort to overcome his own difficulties has made their campaign all the more admirable and gave a human element, which has been widely praised.

Sir Simon Wessely, the president of the Royal College of Psychiatrists, said that in terms of communicating mental health issues, the Prince had done more in a 25 minute interview than Wessely has in his 25 year career.

“He has a reach across the world that people like me can only dream of – he will have communicated in a way that I have been working all my life to achieve,” he said.

Paul Farmer, Chief Executive of Mind, commented, “It’s inspiring to see Prince Harry speaking out about his experiences. It shows how far we have come in changing public attitudes to mental health that someone so high-profile can open up about something so difficult and personal.”

“We know that this will have a huge impact on people who are still struggling in silence with their mental health – every time someone in the public eye speaks up, we know that it encourages ordinary members of the public to do the same.

“Prince Harry speaking so candidly is a true turning point that shows that as a society we must no longer adopt a ‘stiff upper lip’ attitude and that we need to talk openly about mental health, something that affects us all directly.”

In speaking out about his struggle, Prince Harry has shown courage and an honest and wholehearted desire to help others suffering mental health issues. His late mother once pledged to come running to anyone who found themselves in distress, and Harry could not be following more closely in her footsteps.

He said: “What my mother believed in is if you are in a position of privilege or a position of responsibility and if you can put your name to something that you genuinely believe in … then you can smash any stigma you want.”

Smashing the stigma of mental health is exactly what the young royals are doing. 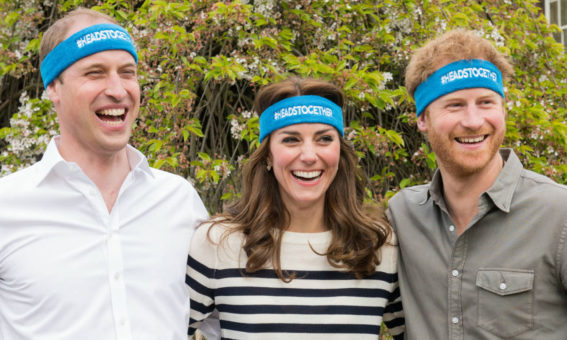 The Duke and Duchess of Cambridge with Prince Harry

Shortly after the announcement of Prince Harry’s interview, Prince William featured in a promotional video with Lady Gaga talking about her experience of mental health issues.

The Duke has praised public figures, such as Lady Gaga, for sharing their experiences of mental health. In the Facebook video, which was watched live by around 15,000 people, Prince William chatted about the importance of celebrities speaking freely about mental health to shatter the stigma around it.

He said, “It’s time that everyone speaks up and really feels very normal about mental health, it’s the same as physical health.

“Everybody has mental health and we shouldn’t be ashamed of it and just having a conversation with a friend or family member can really make such a difference.”

Prince William speaks strongly about his determination to remove the “taboo” around mental health and encourages everyone to see it as a sign of strength not weakness.

A point which Harry also emphasised in his interview, stating “We will all go through tough times in our lives, but men especially feel the need to pretend that everything is OK, and that admitting this to their friends will make them appear weak.

“I can assure you this is actually a sign of strength”

After Harry’s candid interview, the Prime Minister has spoken in support of the cause. Minister are now thought to be considering putting NHS professionals in secondary schools full-time, under plans which are to be part of a green paper  later this year on young people and mental health.

A government spokesman said, “No child should suffer from mental health issues and we are investing a record £1.4 billion to ensure children get the help and support they need.

“We are strengthening the links between schools and NHS mental health staff and later this year will publish proposals for further improving services and preventative work.”

This year, Heads Together has been named London Marathon’s charity of the year. The Duke, Duchess and Harry will hand out medals on the finish line at the Mall on Sunday, with the hope that the race will be known as “the mental health marathon”.

Jacobs is proud to be a founding partner of Mental Health Action Day, a new movement with a mission to empower people to take action for mental health no matter where we are in our mental health jou...

Will McDonald is a Group Sustainability and Public Policy Director at Aviva. Here is his story. Months of lockdown and loss this year have had a huge impact on us all, and prioritising mental health...