When you are a single woman, who walks alone from one rural village to another, advocating wildlife conservation, in an area where hunting and poaching are ‘gari khane bhaado’— the means of survival—life is not very easy.

But where there is a will there is a way, as the clichéd adage goes. When Chandrakala Buda, a community mobiliser in Bardia National Park’s buffer zone, started her journey in wildlife conservation, she was unaware of all the difference she would one day make.

“Even though my village, Rajkanda, borders the wildlife reserve, I had no understanding of why it existed. All I knew was that one had to be very careful while hunting inside the reserve,” shares Chandra.

In 2007, Chandra fortuitously accommodated a couple of conservationists from the Capital, who had travelled to her remote village that lies on the crest of the Churia range bordering the national park. In between conversations Chandra learnt that her guests were planning to form local bodies that could work for wildlife diversity and environment conservation in the region. Unaware of what any of it meant, she became a member out of whim. It was only after the four-day training which followed, that she understood the need for biodiversity preservation and the role humans played in it. “After a couple of trainings, I understood that protecting wildlife would reap more benefits than poaching or hunting ever would. I understood that the wildlife reserve was as much for us, humans, as it was for the animals,” says Chandra.

Advocating against poaching in Rajkanda and neighbouring villages, however, was difficult. “Poaching was a problem in the entire community,” shares Chandra, recalling the early days, “But I had to start right from my home. My brother was an avid hunter who’d disappear for nights, hunting. That was all he did for living.” 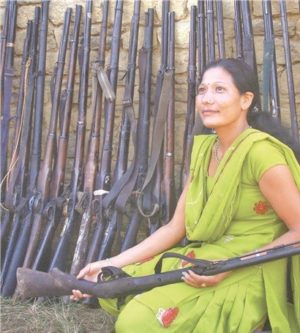 Even when the Bardia National Park Buffer Zone Committee came up with a provision for local residents to surrender their illegal guns, without an intervention from the authorities, it was met with resistance. The locals were just not ready to give up their gari khane bhaado. What would they sell? What would they eat? Where would the money come from?

“If you want me to give up the gun, promise me employment first,” Chandra’s brother had admonished her for months before she finally convinced him to give it up.

For generations, hunting was not just an economical pursuit for the residents of Rajkanda, their attachment to it was emotional as well. Chandra’s father had a gun as well and when she asked him to give it up, he held it in his hand, looking at it like a father looks at a child, and said: “This is my father’s gun. He bought it from India to celebrate my birth. He wanted to let the whole village know that he had a son. I grew up hunting with this gun, it was how we celebrated and survived. But, times have changed and it’s now illegal and there is nothing I can do about it. Hand, it in.”

Starting with her family, then her friends and then friends of friends, it took Chandra one year and a bevy of criticism to collect the first batch of 46 guns from her village. It took her another year to collect 203 more guns from neighbouring villages such as Taranga, Hariharpur and Chhinchu. They are now under the Bardia National Park authority. Today, because of Chandras’ efforts, hunting and poaching by locals in the region is nil. Although it is a feat that she is very proud of— which also brought her into the spotlight as the winner of the Abraham Conservation Award in 2013 and the Sahasi Mahila Award the following year—she recalls having to face severe criticism for her work. “It’s a tough profession: your passion, energy and determination take time to bear fruit. It’s particularly difficult when you are a woman—you get called names. Everywhere you go, you receive uninviting gazes and questions,” she shares. One of the most common complaints was how the locals would be giving up their ability to defend their crops and fields, and on occasion, human lives from wild animals by surrendering the guns.

When you live in the periphery of a wildlife reserve, direct contact with wildlife is inevitable. Humans venture into animals’ habitat to collect fodder and firewood; while animals stray into human settlements to get hold of crops and livestock. When one species disturbs the other, conflict is bound to take place, often resulting in casualties. And advocating wildlife conservation in such human-wildlife-conflict prone zones is a challenge.

Doma Poudel, 32, who was born and raised in Bachhauli that traces the border of the Chitwan National Park, grew up in a similar environment. She grew up learning to chase and defend against animals that she could run into anywhere, anytime. Twelve years ago, she lost her mother to a rhino-attack.

“She was out gathering fodder and firewood as she always did. Every year, over a dozen people are killed by wild animals and many other injuries are recorded. Even when you are aware of the danger, you don’t see it coming to your family,” shares Doma.

Doma believes that women from poor communities like her mother are most vulnerable to this conflict. For one, they are illiterate, and further, they are not encouraged to seek employment away from home. With traditional gender roles still deeply rooted, while the husbands work away from the jungle, the wives and daughters have to regularly venture into the forests.

After losing her mother, Doma, as the new bread-winner of the family, could have chosen any path that paid her bills. But even as one of the many victims of human-wildlife-conflict in Nepal, she chose to work in the field of wildlife conservation.

Today, Doma is the Chairperson of the Community Based Anti-Poaching Unit (CBAPU) in Chitwan, and under her leadership the national park has marked 1000 days of zero rhino-poaching. She is also the first ever female nature guide in Nepal, and strongly believes that animals and humans should thrive in harmony.

“Humans are conscientious beings, and yet they seem to give into rage and wrath. Just look at all the wars currently ongoing across the world. Animals can’t differentiate between right and wrong like we do. Yes, they are wild and dangerous, but that’s just nature.We are a part of a larger ecosystem and we need to co-exist respectfully,” shares Doma, when asked what inspired her to forgive and empathise with wild animals.

In her decade-long career, she has understood that advocating wildlife conservation is easier said than done. Chitwan gets thousands of visitors every year because of its wildlife, and tourism is the most lucrative source of income in the region; but even so, not everybody realises that protecting animals is a must.

“Conservation is only possible when livelihood of the locals is equally paid attention to. People need an alternative way of life that uplifts their lifestyle and income. And I believe it all starts with education and skills development,” says Doma.

A successful wildlife conservation entrepreneur with her own nature-guide-company, Doma asserts that women play a huge role in community mobilisation. “Only if women from every household in the region are given basic education and skills and encouraged to go out and find employment outside of the jungle, an upgrade in the livelihood of villagers is possible,” she says, “Once the villagers lead better lives, they will readily listen to and welcome the notion of wildlife conservation.”