Women in senior management: setting the stage for growth

This report, based on the latest research from the International Business Report (IBR), explores the global shift in the number of women at the top of the business world and examines ways to make this growth permanent and parity possible.

Key findings from the survey include:

• women hold 24% of senior management roles globally, a three point increase over the previous year
• there has been a sharp rise in China, with 51% of senior management positions held by women, compared to
25% last year
• the proportion of businesses employing women as CEOs has risen from 9% to 14%
• education and talent management may work in tandem with flexible work arrangements, which 67% of respondents
offer, to increase the number of women in top leadership
• just 19% of board roles around the world are held by women
• although quotas have been put into place around the globe to increase women’s participation in boards, 55% of respondents oppose such quotas. 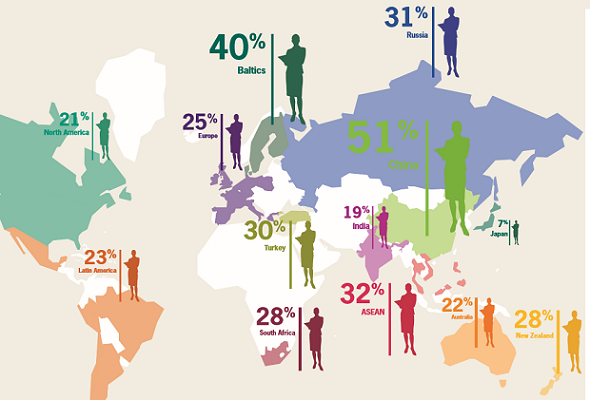 Over the past year, women have grabbed headlines in every industry and every corner of the globe. In the arts, more female directors, producers and writers were able to get their work into cinemas, television and theatre. In politics, an increasing number of women won elections: South Korea, for instance, recently swore in its first female president. Approximately 17 countries have women as head of government, head of state or both (a number that, according to the Inter-Parliamentary Union and UN Women, has more than doubled since 2005), and the world average for women in parliament totaled 20.4% as of 1 February 2013.

The corporate world also saw firsts: Marissa Mayer broke ground when she took the helm of Yahoo more than six months pregnant. Women breaking barriers was the conversation of the year – from the much-discussed piece in The Atlantic, “Why Women Still Can’t Have It All,” by a Princeton professor and former US State Department official, Anne-Marie Slaughter, to Facebook’s chief operating officer Sheryl Sandberg and her new tome, “Lean In: Women, Work and the Will to Lead”, which addresses how women can succeed in the face of gender barriers. Via ‘Lean In’ circles, Sandberg proposes to gather women to share their stories and create strategies for climbing the corporate ladder.

Click here to read the rest of the report

Creating a diverse and inclusive culture at Sage

This piece from the Wall Street Journal gives some great insight into the challenges we all face in building a diverse workforce. But despite these challenges, I believe that companies must proactive...

We believe women should be celebrated and empowered all year round. With International Women's Day being celebrated on Monday 8 March, we're challenging all D&G colleagues to acknowledge the role of...