From cogs to code...

Liv is one of our software apprentices, working for Digital Industries in Manchester. In this question and answer session, Liv shares her experiences of progressing from school into the industry and some of the twists and turns an engineering career can take. 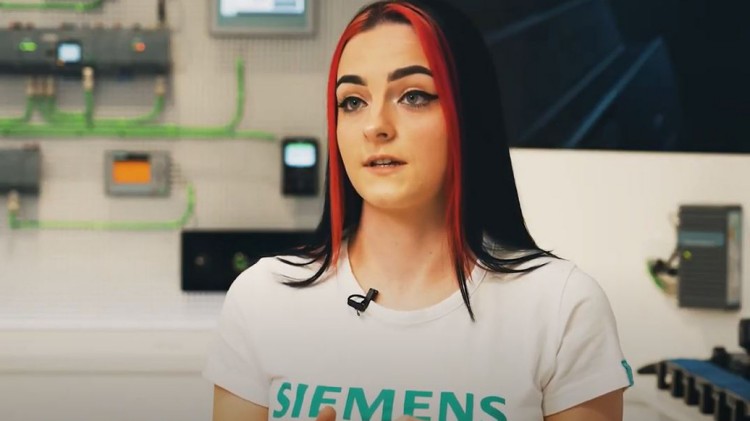 Can you tell me about your career history to date, please?

I'm originally from the Wirral, just a stone’s throw away from Liverpool. I started my career at Siemens Congleton doing an advanced engineering apprenticeship. I knew I wanted to do something more hands-on, especially in engineering rather than just studying theory so that’s why I was attracted to an apprenticeship. Halfway through that, I got a full-time job as a System and Type Test Engineer in the R&D department. I was doing work on the Intelligent Operator Panels and testing for the software team.

I took the opportunity to apply for the Digital Solutions degree at Manchester University, so finished my first apprenticeship and then started that for four years. I’m currently a Software Engineering Apprentice with Digital Industries and completing my degree in parallel.

How early on did you show an interest in engineering and software?

I think it was apparent from a very young age. At aged 8, my mum would always laugh at me because I'd always get excited about putting flat pack furniture together, which I know is weird because for most people it would bring them out in a cold sweat. I always loved watching Top Gear while most of my friends wouldn’t.

I think you know your calling early on. I just always seemed to like logical things, which is why I was good at maths. You either had the answer right or wrong and there was no in-between.

My mum is a Cabin Manager for the airline Tui and my dad works for Airbus in aerospace. So conversations in my house would always be about planes, aerospace, engineering.

In year 9 you choose your options for GCSE and my school, Woodchurch High School, did an engineering diploma that was worth two GCSEs. I had a particularly brilliant Design Technology teacher called Mr Peck who made all of the difference for me. I knew this is what I wanted to do. He helped me get an A star at GCSE. My teachers were so supportive and wanted me to do well.

After A levels, my plan was to become a mechanical engineer because that’s what I’d done so far. However, even then I could see a far better career path in electronics and digital engineering. You could see the tech that was coming out at the time and I wanted to push myself into something that wasn’t in my comfort zone.

When did you realise that you’d be supporting the Ventilator Challenge?

Working in Manchester for DI, Dave Thomas is my apprenticeship contact and he called me personally one day and told me all about a hackathon to support the push for ventilators going on. I’d heard of the Ventilator Challenge on the news and knew we were involved. We were sent a link and a few videos trying to explain what the problem was that we’d tackle.

It was as one specific challenge. Effectively, it was a part of the ventilator that was absolutely fine to manufacture but the calibration was done by hand. Because it was the movement of your hands when calibrating, it could knock the calibration out. We were talking point zero, zero, zero, zero worth of air that we were trying to calibrate to.

I was so proud to be part of one of the two teams who ultimately took a 40-minute calibration issue on the line and solved it, reducing it down to two minutes. My manager, Damian Paton was adamant that if we only put senior members on the team we’d only get one type of answer of solution. Using me and many other ELT apprentices meant that we’d get that diversity of thought that was essential in solving the problem.

Do you feel that the male bias in engineering is a problem for female engineers?

I've never felt that I haven't been supported by my managers throughout my career. I've always been supported in that sense. A lot of the time the stigma and the crude insults can sometimes come from peers. That's where I tend to see it the most.

It sounds bad but in a way I’ve had to harden myself to it because you have to. You hear derogatory things from all corners but if you let it affect you then they’ve won. I hear a lot of people saying that being a woman in engineering is more of a PR activity and it really devalues the work we’re doing.

I’ve always been a massive fan of online games and consoles. I loved playing Xbox and PlayStation, and I still do. My friends would always be surprised that I liked Xbox, as a girl. For me, it was the lack of these strong female role models that really spurred me on to succeed. I never saw these characters on TV so my stubbornness made me want to succeed more than anything to prove people wrong.

Do you believe in the power of role models and mentors to correct this imbalance?

I would definitely agree. You always have to speak to someone about it. There’s always someone who can sort it out and help you and at Siemens we have a culture of allies. We need to call these instances out and turn it on the person saying the negative things. All too often it’ll make the young female engineer feel like she’s got a problem and she’ll carry that around with her. We have to show we’ve all got each other’s backs to really change it.

What's been the best piece of advice you’ve ever received?

It wasn’t strictly advice but more so encouragement. It was when I was doing testing for the software engineers in Congleton. I desperately wanted to make that switch from electrical engineering to software engineering and just needed that push. That team at Congleton would literally sit there after work with me and helped me through any of the stuff I was trying to do on my own. That was really the encouragement that I got that I went, you know what? I'm going to apply for this, somewhere completely different and I'll have to move, start a new unique course and start a whole new apprenticeship. It was those guys really that encouraged me to do it. They were the best team I could have hoped for...but don’t ever tell them that!

Siemens staff tell us about what Pride means to them

In honour of Pride Month, some of our staff were keen to tell us about what Pride means to them personally and about their journey towards accepting themselves or others. The bottom line is that we...