Virtual Pride and the OUTfront LGBT+ network at Capgemini

Now Pride month (June) has come and gone we thought we’d reach out to our network to find out how our clients celebrated during the COVID-19 pandemic and what they thought of a virtual, less traditional Pride. 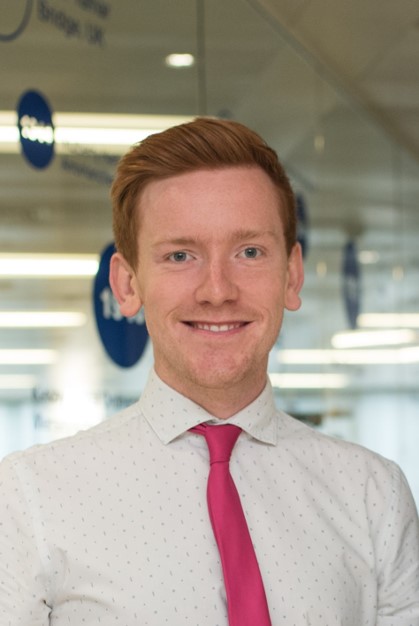 Tom Dodson is a consultant within the Invent Consulting arm of Capgemini Group and works in the public sector. He is also the co-chair of the OUTfront LGBT+ network at the company and passionate about diversity and inclusion.

This year, due to COVID-19, Pride events across the world were cancelled and the LGBT+ community, along with allies, had to find virtual ways to celebrate Pride and raise awareness of LGBT+ issues. We spoke to Tom about how Capgemini celebrated Pride and found out how the OUTfront network supports LGBT+ team members at the company.

For Pride this year, Capgemini hosted a number of virtual Pride talks that included guest speakers along with launching social media campaigns around what made employees ‘Proud’ to work at the company. They also hosted panel discussions on senior leadership, intersectionality, BAME, being LGBT+ and working with clients, where the company stands in relation to LGBT+ issues today and where they want to be next year.

Through the last two weeks of June to the first two of July around 400 people dialled into Capgemini’s virtual Pride sessions with guest speaking podcast stars Aamir & Amir drawing the biggest crowd.

“In terms of Pride, the celebration piece fell by the wayside as we couldn’t hold in-person events but, in terms of reflecting on the past and casting our eyes to the future, it was a lot more rich and meaningful than it would have been if this hadn’t happened, which really carried its value. We put-funding  toward external speakers which we wouldn’t have been able to afford had we gone to the in-person celebrations,” said Tom.

The UK OUTfront LGBT+ network, which currently has around 240 members, at Capgemini is focused and based around four C’s; Culture, Colleagues, Clients and Community as defined below:

Culture: Ensuring inclusivity, education and engagement; ensuring that staff are aware of the network and the conversations that occur within the network.

Colleagues: Supporting colleagues in bringing their ‘whole selves’ to work and ensuring that they feel that support.

Clients: Working with clients as well as internally, Capgemini host joint events with companies such as HMRC and Atos.

Community: Pushing the conversation out externally with a professional focus and working with bodies such as Interbank and various charities. 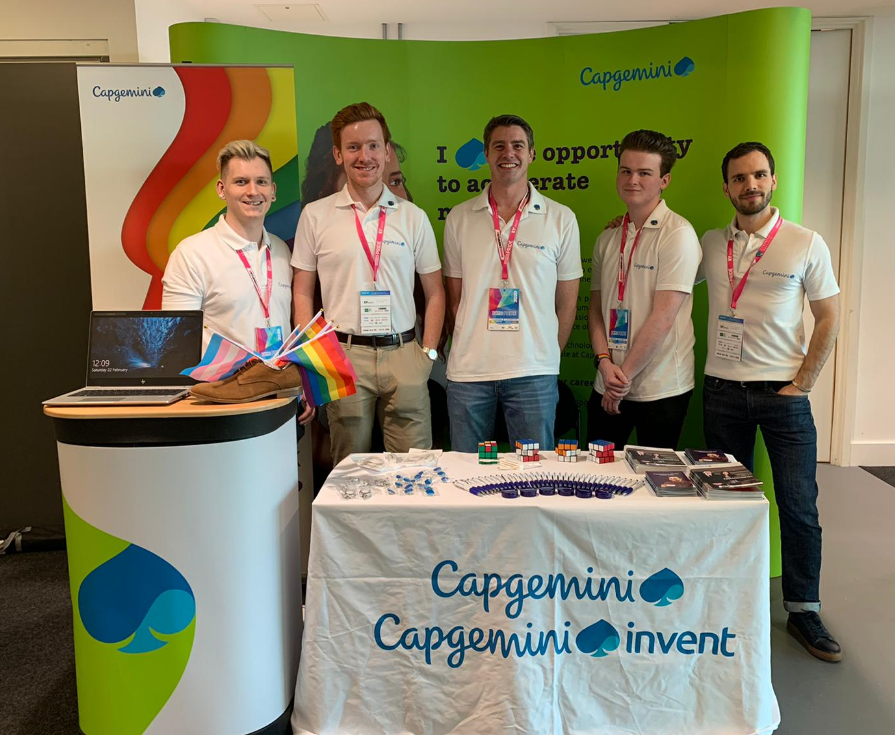 Image of when the network were represented at Student Pride 2020.

The OUTfront network at Capgemini was formed around ten years ago and has various arms across the world. Each network is independent but they all come together every couple of months to discuss policy and share best practice and stories to ensure the network is appropriately supporting all groups that fall within LGBT+. Tom said:

“You need policy in place to kickstart anything so, formally, we review policies with the likes of Stonewall or other external parties to ensure our policy reflects the times we’re living in. A key piece is gender neutral language so things like paternity or maternity leave. We review existing policies roughly quarterly and we push for new policies that we think are important.”

This year there has been a particular focus on trans awareness and inclusion and one positive policy change has been that gender reaffirming pelvic surgery is now covered by Capgemini’s health insurance. Although they have been in the top one hundred in the Stonewall Workplace  Equality Index companies (this year 55th out of 503 employers) for the last three years, Capgemini noticed that trans workers felt less supported than lesbian and gay workers and so are working to address this.

“People see allyship as two dimensional; you are either for or against, active or discriminatory, but Stonewall say there are four dimensions including active and passive. I would like to think the majority of people are on the positive side but most are probably passive. We’ve been encouraging positive and active, particularly in senior leaders with things like reverse mentoring, but also easier things you can build into day to day life,” said Tom.

When we asked Tom how people can show their support of the LGBT+ community he said:

“Don’t be afraid to have the conversation. When it comes to any inclusion diversity piece you are almost scared of the conversation so you don’t have it. We can’t expect to get better as a

society and community if we don’t have these conversations. Be aware you may make a mistake but come to it as a willing-to-learn person and be authentic.”

Another push for the network this year has been intersectionality; people that fall within more than one inclusive network, for example an LGBT+ member who is also part of the BAME community.

“We’ve done great work this year in those networks and we are committed to working through these issues and working together. You can only make change if you have critical mass. The race network have over 400 members so, together, we’re over 600. We need to work and stand together to use our mass and momentum. We need to make sure we are meeting the needs of all intersectional employees but not diluting the message of each individual network,” said Tom.

We look forward to experiencing Capgemini’s Pride next year and thank Tom for talking to us today.

As Muslims in the UK and around the world prepare for the month of Ramadan, we would like to extend our warmest wishes to team members and their families observing, for a peaceful and blessed Ramadan....

Capgemini s policy to sponsor training, certification and conference attendance has helped me create opportunities for promotion and helped expand my industry presence. I ve spoken at industry event...

A day in the life of a Programme Management Officer

My Journey from An End Users to a Consultancy

As I approach my one-year anniversary with Capgemini, I wanted to share my journey with all my friends, colleagues, and all the women in IT who are thinking of making a career change. While this m...