FEMALE COLLEAGUES, TOGETHER WITH FRITZ JOUSSEN STRIKING THE “BREAK THE BIAS” POSE OF THIS YEAR’S INTERNATIONAL WOMEN’S DAY. 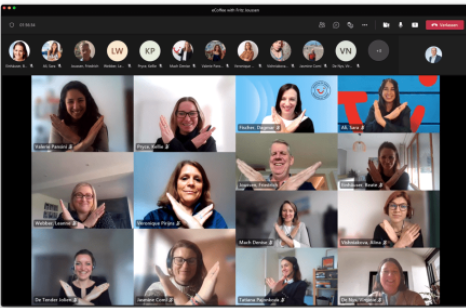 Since working remotely has become the temporary default way of working at TUI during the pandemic, eCoffees have become a good way for our executive leaders to stay in touch with colleagues, for driving exchange of perspectives and collecting valuable insights. Fritz Joussen has so far completed no less than 30 of those virtual coffee hours – the virtual equivalent to the water cooler talks with small groups of about 10-12 colleagues joining.

Normally, the topics discussed stay in the virtual room, but the eCoffee on February 25 was different to that matter, because all colleagues joining Fritz agreed to make the subjects discussed public and because – they were all female! The occasion for the call was “International Women’s Day”, which takes place today.

The first hour was mainly dedicated to overall discussions about the TUI strategy and business activities. Then, a straight-forward question to Fritz (“do we do enough to encourage women to excel in their roles?”) triggered a shift to the topics of female leadership, differences between men and women when “working out loud” and whether modesty – often attributed as a typically female behavior – would be a downer for careers. Fritz expressed his view that it is pivotal to always calibrate self-presentation and actual performance when trying to figure out who would be the best candidate for an open role or a promotion, as a mean to avoid the typical error traps of being biased.

Everyone agreed that there are still imbalances and biases to overcome at TUI, not just with regards to gender, but also in terms of ethnicity, religious belief, age, or sexual orientation. Diversity is an asset, even if managing diverse teams sometimes makes things more challenging in the beginning. “If I only hire people who are like me, then I will miss out on important views of others, on their beliefs and their insights. That would be a huge mistake”, Fritz Joussen said.

The eCoffee was scheduled for 90 minutes, but as a matter of fact, two hours passed before the session ended. One important take-away was this: It’s important to talk more about the subject in teams, but also in townhalls and in public. Whether it’s an informal female network, a female mentoring or portrays of female leaders: there’s much we can do, but it should go beyond just a one-off activity on “International Women’s Day”.

Kellie Pryce, Director of Talent, People Development and Culture, who has joined TUI just a few weeks ago, took that up in her resume of the eCoffee: “Not only did I gain good insights into TUI’s culture, but I also learned many things that I will incorporate into our work in the next months on TUI’s diversity roadmap.”

TUI has many successful female leaders in a wide range of areas. In our series "Female [email protected]" we feature these colleagues and their inspiring thoughts on the subject of equality in interview for...

TUI has many successful female leaders in a wide range of areas. In our series "Female [email protected]" we feature these colleagues and their inspiring thoughts on the subject of equality in inter...

KATIE MCALLISTER, WHAT IS YOUR CURRENT ROLE AT TUI? I'm responsible for sales and marketing activities in UK&I and the Nordic Countries. This includes the core marketing disciplines of brand, adver...

TUI was celebrating its biggest involvement to date with the Maspalomas Pride 2022!     TUI a key sponsor of the 21st edition of Pride Maspalomas Excursions devel...