You can be treated as an equal after a career break 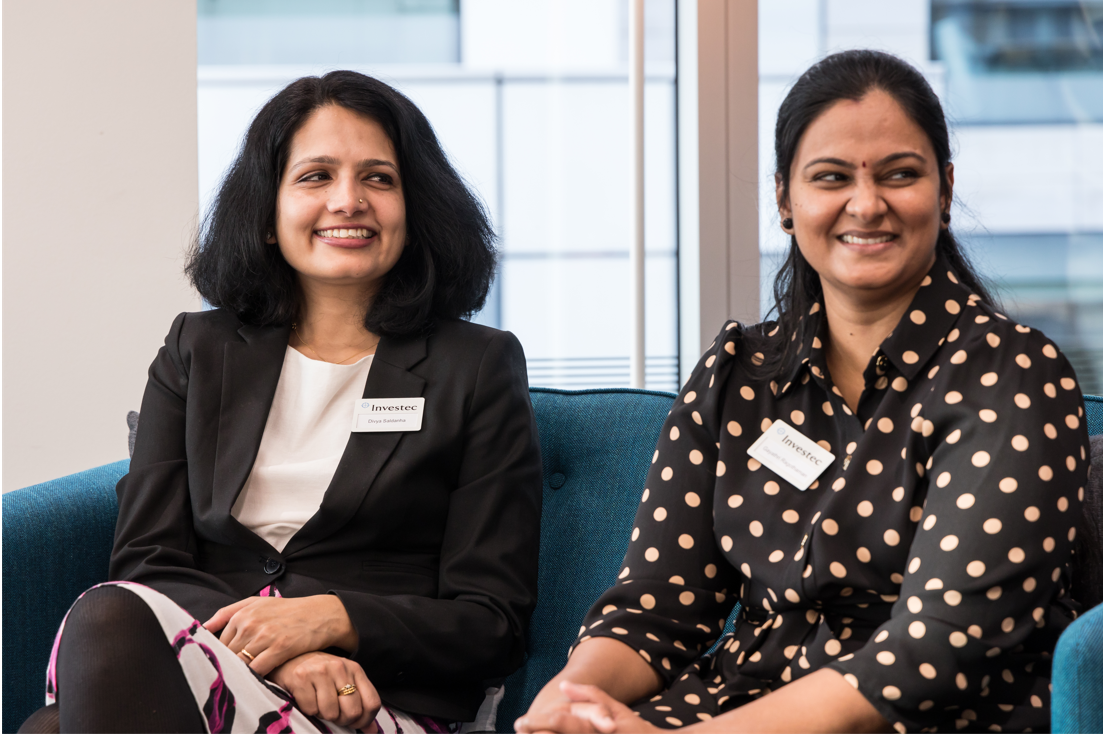 What's it like to return to work after more than five years off? Two women on Investec's Return to Work programme share their experiences

This article was first published on Investec Focus: ‘I want to show people that you can be treated as an equal after a career break’

Divya Saldanha works in the iX team at Investec. She has two children and took an 11-and-a-half year career break before joining the team through the Return to Work programme. She explains:

“The opportunity to re-start my career was meant to be. After 11-and-a-half years as a stay-at-home Mum, I interviewed and was hired by Investec within a week. Now, I’m part of the team.

“I left school in India at a time when we got our first home computer and as a result became fascinated with technology. I worked for an ICT firm for five-and-a-half years before relocating to the UK and having two children.

“Like for many women, motherhood was my focus for a long time but when my children started secondary school, I felt that I’d lost part of my identity. If you’re not careful you can lose your self-confidence so I think it’s important to push yourself forward before fear gets the better of you.”

“I want to say to anyone thinking of returning to work after a career break that ‘you can do it too’. The challenges seem much greater in your head.

“To join Investec I had to take part in my first job interview for 19 years. It was daunting but that first meeting started with a group discussion alongside other applicants and it helped me relax. Investec recognised that I hadn’t worked on their current digital systems so I was able to do my skills test in the coding language that I was familiar with. I had plenty of time to prepare and was given guides to help me so I could confidently show my potential.

“Nearly eight months on and life has changed for the better. There’s a lot of support available for employees but on a day-to-day basis work is assigned to me equally and that’s the way it should be.

“I think some people do wonder if having a family makes someone less committed to work but I haven’t experienced that here. My career break has given me new skills. I work efficiently and can multi-task precisely because I’ve got other priorities at home.

“For this reason, my work/life balance has been good too. As for my family – they’re excited for me. My children are studying computing at school and say ‘Mum’s a coder!’ Now they ask me to help them with their homework. ”

Gayathri Nagarajan Ragothaman took a role in a technology team at Investec after taking a career break of five-and-a-half years. She explains:
“When Investec asked me to share my experiences of the Return to Work programme I initially said ‘no’. But, that’s for a positive reason – I’m treated like any other member of the team and work without the tag of a ‘returner’. I sometimes forget that I came here after a long career break.

“However, I wanted to show people that you can find a position and be treated as an equal after a career break and share my experience with people thinking of making the same move.

“A friend recommended the Return to Work programme to me because I wanted to progress my career after five-and-a-half years spent raising my children. It was something I’d spoken about and I took the view that ‘you don’t know if you don’t try’.

“Before I took a career break I worked for a technology company that supported clients in financial services, so I had experience in the industry.

“When I interviewed at Investec they matched me to a team and took my skills into consideration. I’m now working in the tech team that supports bankers working on quantitative strategies for corporates. In my current role I make sure the different technical systems the bank has in place are communicating information with each other.

“Learning about the core functions of those systems is a challenge but it’s also my favourite part."

From blockchain, artificial intelligence and open banking to new ways of working, discover how innovative tech trends and future ideas will reshape wealth management. This article was first published...

Female leader insights: Gen Z, the digital natives who are taking over from millennials

Gen Z, the digital natives who are taking over from millennials, are setting future financial trends. But what makes them tick? This article was first published on Investec Focus: What does gen Z want...

Gender Equality: in society, in the workplace, and in investment

Though there’s been significant progress towards gender equality, we’re still way off the 2030 UN goals. Covid-19 shows we must renew our focus, writes Investec’s Barbara-Ann King. This article was fi...