My name is Daniel Pack, and I’m the Branch Manager at Travis Perkins Rushden where we provide general building products, as well as specialist building materials, to both the trade and members of the public. Before I started working with the Travis Perkins Group I was an Infantry Soldier in the 2nd Battalion Royal Anglian Regiment. 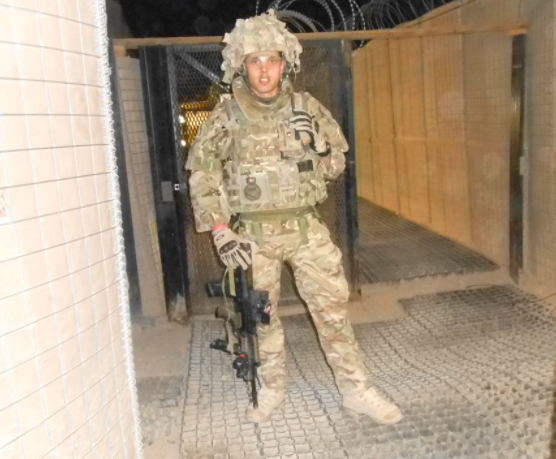 My time in the British Army

I joined the Army in September 2011, where I started as an Infantryman at ITC Catterick. After completing an initial 14 weeks training programme of basic military skills including weapon handling and fieldcraft, it was then onto phase two which consisted of another 14 weeks solely concentrating on role-specific training. This also involved more intense physical training as well as learning both battle and weapons tactics.

Though I didn’t know it at the time, this training gave me so many transferable skills that I use in my job today, such as the ability to communicate, deal with adverse situations and most importantly solve problems. Just like in the Army, every day is different at Travis Perkins and my time in the military has prepared me to be proactive rather than reactive.

After completing my training, I was stationed in Cyprus for six months and took part in a number of operations and exercises across the country, before some time back in the UK. Following pre-deployment training in Kenya, I undertook specialist military vehicle training in preparation for the Battalions deployment to Afghanistan, where I was stationed for 8 months. Our role was to maintain and build relationships with the Afghan National Police and Military, as well as perform daily patrols and operations in the local area. My other postings included Germany and a support role with the Parachute Regiment in Belize, where I was trained in jungle warfare and survival skills before leaving the Army in January 2016.

Life after the Army

After leaving, I felt that my driving qualifications, along with the personal enjoyment I gained from driving in various situations, made my career path a no brainer. My first job was driving for a skip and disposable waste company, although I had also applied for a role at Travis Perkins, advertised through their careers site. I really wanted the position at Travis Perkins especially as they offer many additional ‘perks’, but also as they are a huge supporter of recruiting ex-forces personnel. I was delighted to be offered a Class 2 driving role for them based out of the Wellingborough branch in February 2016.

It was a great job especially as every day was different, with new challenges and situations arising. I could be delivering to both commercial and domestic sites via a crane mounted vehicle one moment, or working in the yard packing and picking various deliveries the next.

Nine months on and I was ready for a new challenge and was especially keen to progress within the company, so was delighted to be offered a role at Rushden as a Customer Sales Assistant - my first office-based role and a massive learning curve, but a really enjoyable one! After 14 months I was keen to take on more responsibility and secured an Assistant Manager role in Kettering; a much larger branch with more staff to manage, so a natural career progression for me and one my managers were really supportive of.

One year on and I’m now back at Rushden but now as a Branch Manager. My first few months in the job were a great start and I’ve managed to achieve a lot of positive changes in the branch and within the team.

The best part of the job is the people

You miss the camaraderie when you leave the Army but I’ve created some brilliant bonds with the people at Travis Perkins. As a Branch Manager, you’re able to build a strong team and you get a lot of satisfaction seeing those people pull together. The job is also about making sure that everyone goes home safe at the end of the day, and like in the Army, this is something that really unites the team. Though we all have our own role in making the branch succeed we’re all here for each other and that’s something I think is unique to Travis Perkins. 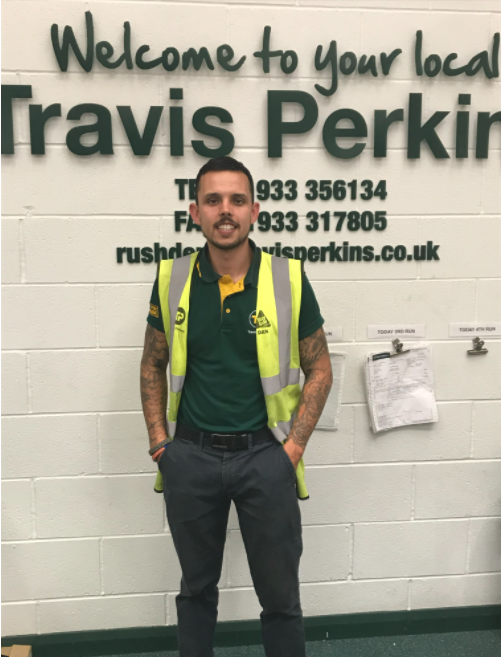 A little bit of ambition will get you a long way

I left the Army with ambition and the desire to do something great. I gained lots of transferrable skills and had a qualification under my belt so I knew I had what it would take to kick start my career. All I needed was to secure a job at a big company that could offer me a route to progression. I’d say the combination of a willingness to work, using initiative and the desire to do well is what’s helped me develop from a Driver to a Branch Manager in just four years. These are qualities that Travis Perkins not only recognise, but reward. The people I’ve worked under have all been brilliant and helped me along the way. They saw the potential in me and I like to think that I’m now able to support my team in the same way.

I’ve now been at Rushden for 8 months and truly relish this varied role. I love the responsibility of managing others, of getting more involved ‘behind the scenes’ including reviewing the sales figures and the management accounts, through to generally ensuring that we’re performing as an effective and profitable business.

The transition from military to civilian life

The transition from life in the military to civilian life is never an easy one. I feel what could have been a hard time in my life was helped made easier when I started working for Travis Perkins, especially as everyone from the Regional Director through to my branch colleagues were so hugely supportive. My time in the forces helped shape me as a person, teaching me to be proactive and organised. The great time-keeping and man-management skills I developed helped to instil in me the importance of working as a team to get the job done, which is exactly what we do here at Travis Perkins.

Why work for Travis Perkins?

I believe I am a strong example of what the company can really offer in terms of progression, not only within the Travis Perkins business, but also the opportunities within the wider group of companies such as Wickes, City Plumbing and CCF. As long as you're willing to work hard and offer good customer skills along with maintaining a safe working environment, the opportunities are there for the taking. I would highly recommend a career within the Travis Perkins Group to any ex-forces personnel as the number of roles available, along with the different career paths to take, make it a business to be a part of.

Why I chose an Apprenticeship at Travis Perkins

Charlotte joined Travis Perkins Tool Hire with no previous experience in the industry but has since gained a promotion and is now Assistant Tool Hire Manager at our Hemel Hempstead branch. Coming from...

Lodge Farm based Travis Perkins plc have announced they will be sponsoring Pride Northampton, the first time the firm has taken this step. The Pride Parade on Sunday 26 June is organised by the North...

Ben is the Service Desk Manager in our IT Service Desk department in Head Office. He’s been in his role for 5 months now, but part of the Travis Perkins Group for over 5 years. We spoke to him about...