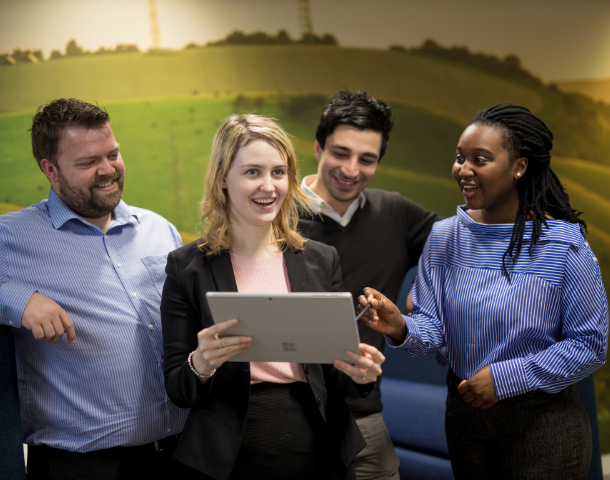 Debra Wade is a Technical and Specialist Team Leader in Customer Compliance Group at HMRC and has been with the company for nearly 35 years.

After growing up in Liverpool, with no particular career aspirations or higher education, Debra joined HMRC when she was 17. Starting in a temporary clerical role, Debra was then taken on as an administrative assistant.

“It was quite tough in Liverpool, the years I grew up were probably the poorest years in the north. There was loads of unemployment and I was fortunate to land a job in the civil service when I did,” said Debra.

Debra’s parents pursued several careers in Liverpool including running a pub, a sweet shop and a gym, but neither had any formal further or higher education. At Debra’s school, it was not common to pursue higher education and none of Debra’s immediate friends went to University.

“If my parents had been in professional jobs, it may have had more of an impact on what I wanted to do once I had finished school,” said Debra.

Since joining HMRC Debra has undertaken a number of training programmes. To achieve her first promotion, Debra was in the last cohort to take the Tax Officer exams. Following this she went on a 12-week programme to achieve her ‘TO’, which is the equivalent of an administrative officer now.

“Then I got a promotion to Officer Grade and after three years I got onto the Inspector Training programme which took me from Band O to Grade Seven within the six-year training programme. This is a Level Four qualification and is ATT accredited,” said Debra.

She now manages a team of 12 soon to be 13 Grade Seven inspectors, that involves everything from authorising penalties and the HR aspects.

Debra has found HMRC to be a supportive company to work for and has been allowed the flexibility to raise four children at the same time as progressing with her career.

With an increase in digital technology in the workplace, Debra has seen an improvement in working practises that enable a greater level of flexibility that employees, including those with young families, can benefit from.

“HMRC is a lot more digital now, smarter ways of working have improved since I had young children. You’re now able to work from home with ease and we have great working flexibility,” said Debra.

Since Debra joined HMRC she believes their diversity and inclusion practises and initiatives have greatly improved. Being the oldest in her team, she reflects that she does not experience any ageism and feels the team all support and respect each other’s experience.

"I left secondary school with only GCSEs, I didn't finish my A levels and therefore didn t progress to university. Being a child of a first-generation immigrant played a big role whilst growing up, I...

Wipro & me - a mutually fulfilling partnership!

Mr Premji and me, September 2019, Wipro HQ It was a positive hunch with Wipro s engaging campus approach rather than any formal research that made me accept their offer over other global brands in 199...

Working in the Government Property Profession

A refurbished jetty for HMS Queen Elizabeth is just one of the vital infrastructure projects DIO has delivered for Defence in recent years. [Crown Copyright / MOD 2017] The Ministry of Defence is one...

Capgemini s policy to sponsor training, certification and conference attendance has helped me create opportunities for promotion and helped expand my industry presence. I ve spoken at industry event...