Siemens staff tell us about what Pride means to them

In honour of Pride Month, some of our staff were keen to tell us about what Pride means to them personally and about their journey towards accepting themselves or others. The bottom line is that we can all be better allies for the LGBTQ+ community – be it in the workplace, at home or on the streets.

Just 65 years ago, 93% of people in this country thought that being a homosexual was a serious medical condition that needed to be treated. Fortunately, we have come a long way but it is still difficult for many people to be proud of who they are.

I first knew I was gay when I was around 10 but wasn’t confident enough to tell people for another 11 years. I’m sure my school wasn’t the only one where “gay” was the main insult on the playground. I was still figuring things out but based on the background noise I heard on TV, I was certain that being gay was something wrong. As time passed, I realised I couldn’t change who I was, so I chose to embrace this part of me instead.

Allyship is a really powerful way to change that background noise, creating an environment where people can be proud of who they are. Many of the things you can do to be an ally, such as being open minded, listening and not assuming everyone you meet is straight, are not only easy to do but can really make a difference. Jyotsna is a great example of what an ally can be, so please reach out to either of us, or Google(!) if you want to learn how you can help. 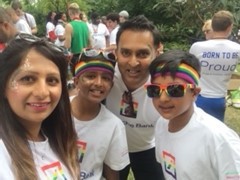 As an ally for LGBTQ+, my aim is to create an inclusive workplace where colleagues can bring their whole self to work, feel safe and are free to choose which parts of their identity they share, without fear of judgement. This enables staff to focus on the job in hand, supports their mental health and wellbeing, and boosts innovation through diversity.

There are many BAME LGBTQ+ young people who don’t feel able to be ‘out’ within their local BAME, faith or cultural communities. Even within LGBTQ+ communities, BAME LGBTQ+ young people may not feel they are able to be their full selves. Young BAME LGBTQ+ people need support, but many don’t have access to LGBTQ+ youth provision. There are supportive people within BAME and faith communities, but being silently supportive, sadly is not enough. We need more visible allies. Visible allies can have a lot of influence by encouraging people to think differently about gender and sexuality. Everyone has some kind of relationship with gender and sexuality. However, not all gender identities and sexualities are equally respected and valued, which is a problem that we must work to change.

As a mother of two young boys, I want to ensure that they are brought up with awareness and appreciation of LGBTQ+ and other communities. This, I believe, would encourage them to be more accepting of others and make sure they are aware of potential biases of others, whether that be in a social or professional capacity, and treat everyone equally whatever their beliefs, backgrounds, culture or sexual orientation.

We were very fortunate in 2019 to participate in London Pride as a family. The experience of the procession and carnival atmosphere left us all with a feeling of pride.

At the young age of 14, I was a little naïve around the topic of sexuality. I was barely aware that there were different types of relationships other than heterosexual ones!  The topic of homosexuality was not widely discussed and was seen as taboo.

Fast forward several decades and things have changed … or have they? As a mum of two children, I never imagined that my 14-year-old son would one day tell me he was questioning his sexuality and that he was gay.  After that, he began questioning why he was the way he was… did it have anything to do with the way I had brought him up? Or was it perhaps because he only lived at home with his sister and mum? Of course, this was not the case.

Having bravely made the decision to come out to his friends, he anticipated a different reaction to that which he received. He was bullied which led him to a period of self-harm. Even though homosexuality, ethnic diversity and equality, are all seemingly celebrated in today’s society… my son’s experience makes me wonder whether things have really changed since I was his age.

The bottom line is that he is above all my son whom I am hugely proud of. In order to better support him throughout his difficult experience, I have also had to embark on my own educational journey. Most importantly, I’ve had to dedicate time to better understanding how my son feels through all this and how I can be a better ally to him and the LGBTQ+ community. My trip is far from over, but I’m determined to keep at it!